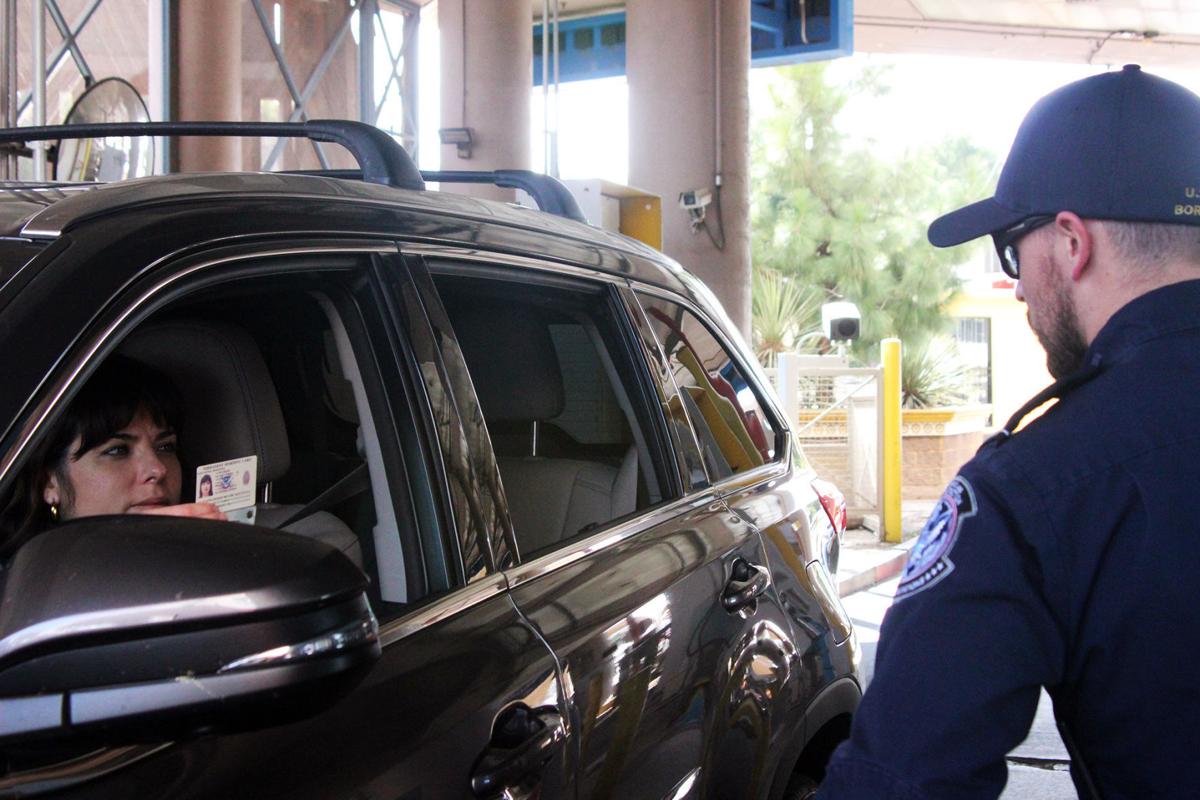 A woman shows an officer her SENTRI and permanent resident card before driving into the United States. 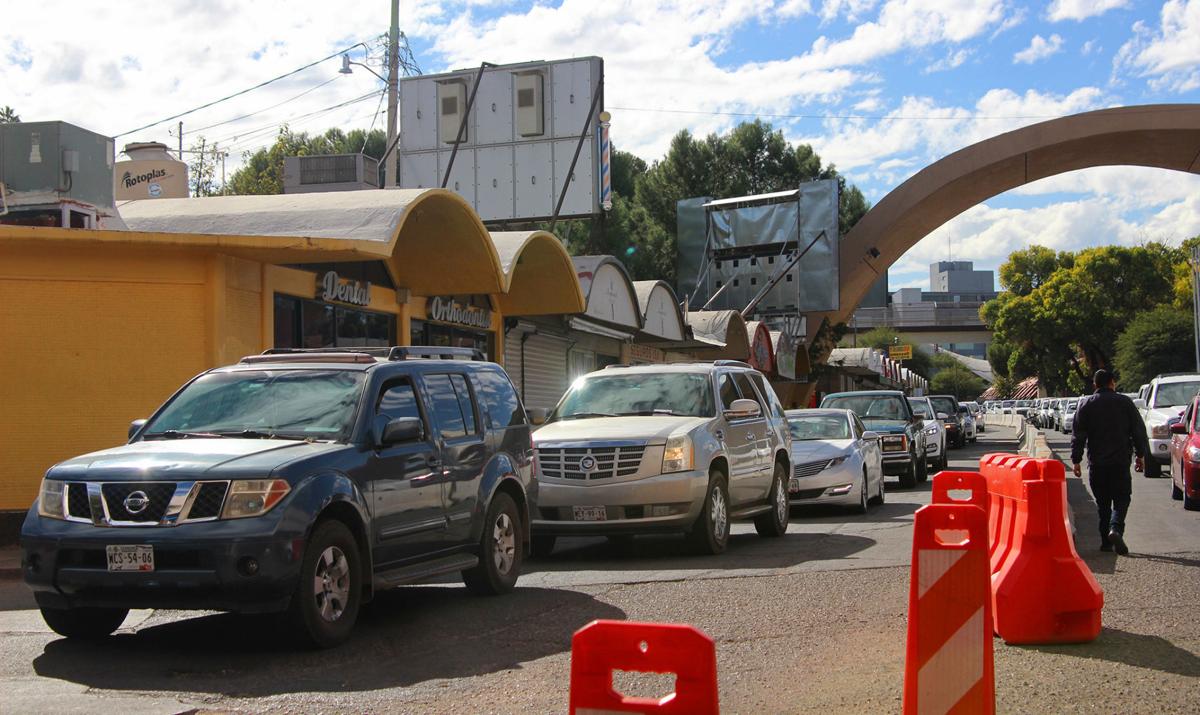 Vehicles line up in Nogales, Sonora for the SENTRI lane before crossing into the United States through the Dennis DeConcini Port of Entry.

A woman shows an officer her SENTRI and permanent resident card before driving into the United States.

Vehicles line up in Nogales, Sonora for the SENTRI lane before crossing into the United States through the Dennis DeConcini Port of Entry.

Late last month, after a 25-year-old woman driving through the SENTRI lane at the Dennis DeConcini Port of Entry was referred for a secondary inspection, a drug-sniffing dog alerted to her vehicle and U.S. Customs and Border Protection officers found nearly 48 pounds of methamphetamine, worth almost $144,000, hidden inside.

Two days later, a 77-year-old Nogales woman also entering through the SENTRI lane at the downtown port was referred to secondary, where officers found more than 41 pounds of meth, worth more than $123,000, and more than 12 pounds of heroin, valued close to $216,000, in her car.

SENTRI, or Secure Electronic Network for Travelers Rapid Inspection, is a CBP program that gives expedited clearance at U.S. ports of entry on the Mexico border to pedestrian or personal-vehicle travelers who have been deemed low risk for criminal activity. However, while a SENTRI pass allows participants to enter the country through a faster-moving, dedicated lane, it isn’t a free pass to cross into the United States without inspection.

“It’s practical if you have the SENTRI, it’s fabulous,” said Gracie Fleischer, a 53-year-old business owner from Nogales and a SENTRI cardholder who visits Mexico for business, errands or to go out to eat.

Even so, some of her friends with SENTRI still complain about the wait times and think they should be able to cross automatically, Fleischer said. She’s more philosophical about it, noting: “You can’t go into another country without getting checked.”

As CBP in Nogales continues to encourage community members to sign up for SENTRI as a means of reducing wait times at the border, and as it seeks to expand the program to the Mariposa Port of Entry, it also warns applicants and cardholders that they are subject to the same questioning and inspections as people using the mainstream lanes.

In fact, agency officials say, SENTRI members are held to a higher standard when it comes to playing by the rules and can suffer stiffer consequences when they violate them.

For example, if someone brings prohibited or undeclared fruit through a normal lane, they are subject to a civil penalty but won’t lose any border-crossing priveliges. If SENTRI user does the same thing, they face the civil penalty as well as the possibility of having their SENTRI membership revoked.

“This program is very beneficial to the traveling public, obviously if they’re going to be traveling back and forth,” said Marcia Armendariz, a CBP officer and spokeswoman for the agency in Nogales.

“It is a trusted traveler program. It does expedite their process with them coming back into the country,” she said, adding the caveat that members “are still subject to get inspected, whether it’s their vehicle, their luggage, their purses, even the person.”

While SENTRI users travel along a typically shorter and faster lane, they don’t simply swipe their card and cross. They must stop to show their SENTRI card and ID to an officer who can chose to ask questions or refer the person to secondary inspection, just like in the mainstream lanes, Armendariz said.

Also like the normal lanes, SENTRI users may be subjected to post-primary inspection, which in the case of vehicle lanes includes slowing down for drug-sniffing dogs and officers with undercarriage-viewing mirrors.

There are no age or citizenship requirements for SENTRI, but the program is off limits to anyone who has been convicted of a criminal offense or has charges or warrants pending against them. It also prohibits anyone who has violated customs, immigration or agriculture regulations or laws in any country.

Potential members submit an application and $122 fee. The program links travelers to a specific vehicle, though participants can register up to three additional vehicles for an extra $42 each. If the application is conditionally approved following a background check, the applicant completes an in-person interview at a SENTRI Enrollment Center, such as the one at the DeConcini port in Nogales.

After passing the background check and interview, Armendariz said, SENTRI users are given materials and watch a video about all general and SENTRI-specific border-crossing rules.

“They know and they should be aware (of the rules),” she said. “They do sign a contract stating that they know what’s permissible and what’s not.”

Still, despite the vetting and education process, ports that comprise CBP’s Tucson Field Office, including those in Nogales, revoked 288 SENTRI cards from October 2016 through September 2017, up from 235 revocations the prior fiscal year.

The increase in revocations corresponds to a rise in the number of vehicles passing through all Arizona SENTRI lanes, both in the Tucson and Yuma/San Luis areas: 1.9 million vehicles in FY 2017 versus 1.6 million in FY 2016.

Fleischer, the SENTRI participant from Nogales, said she hasn’t had trouble following the program rules, but once had her card temporarily revoked after she accidentally typed in an extra number while updating CBP about her new license plate.

Fleischer said she understands why CBP is so strict.

“They’re trusting you to come into the U.S. It’s a trust. They tell you what not to bring in and all of that and it’s understandable,” she said.

CBP could not provide data on how many revocations were due to drug or human smuggling, but Armendariz said the majority of revocations are for breaking other rules, such as when a user fails to carry their SENTRI card, lets someone else use their card, doesn’t update their account after changing their license plate, or tries to cross with banned items. It’s also against the rules for a program participant to try to cross through a SENTRI lane with a non-cardholder in their vehicle.

When SENTRI holders do smuggle, Armendariz said, they may have been recruited by cartels to apply for the program or approached by a criminal organization once they already had their card.

“It’s a combination of everything,” she said.