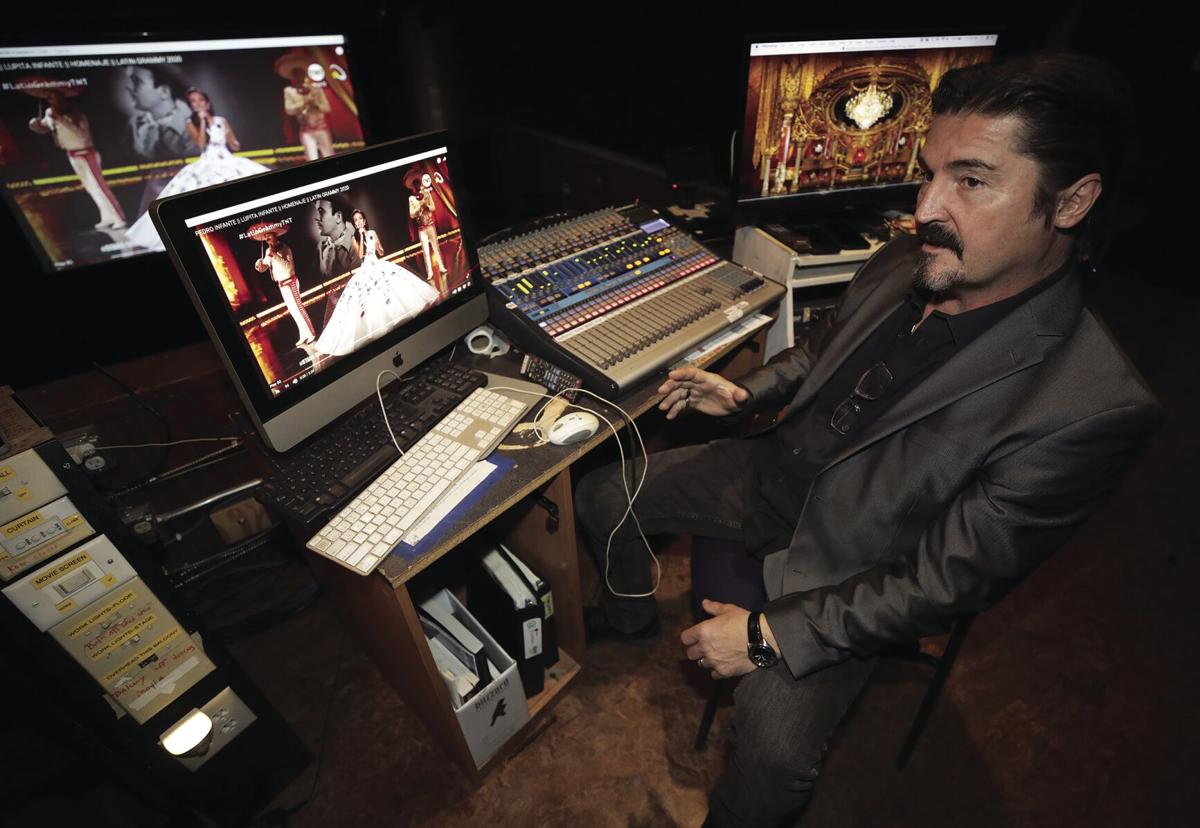 Michael Page sits in front of his audio/video control computers in the Royale balcony while talking about his digital productions. 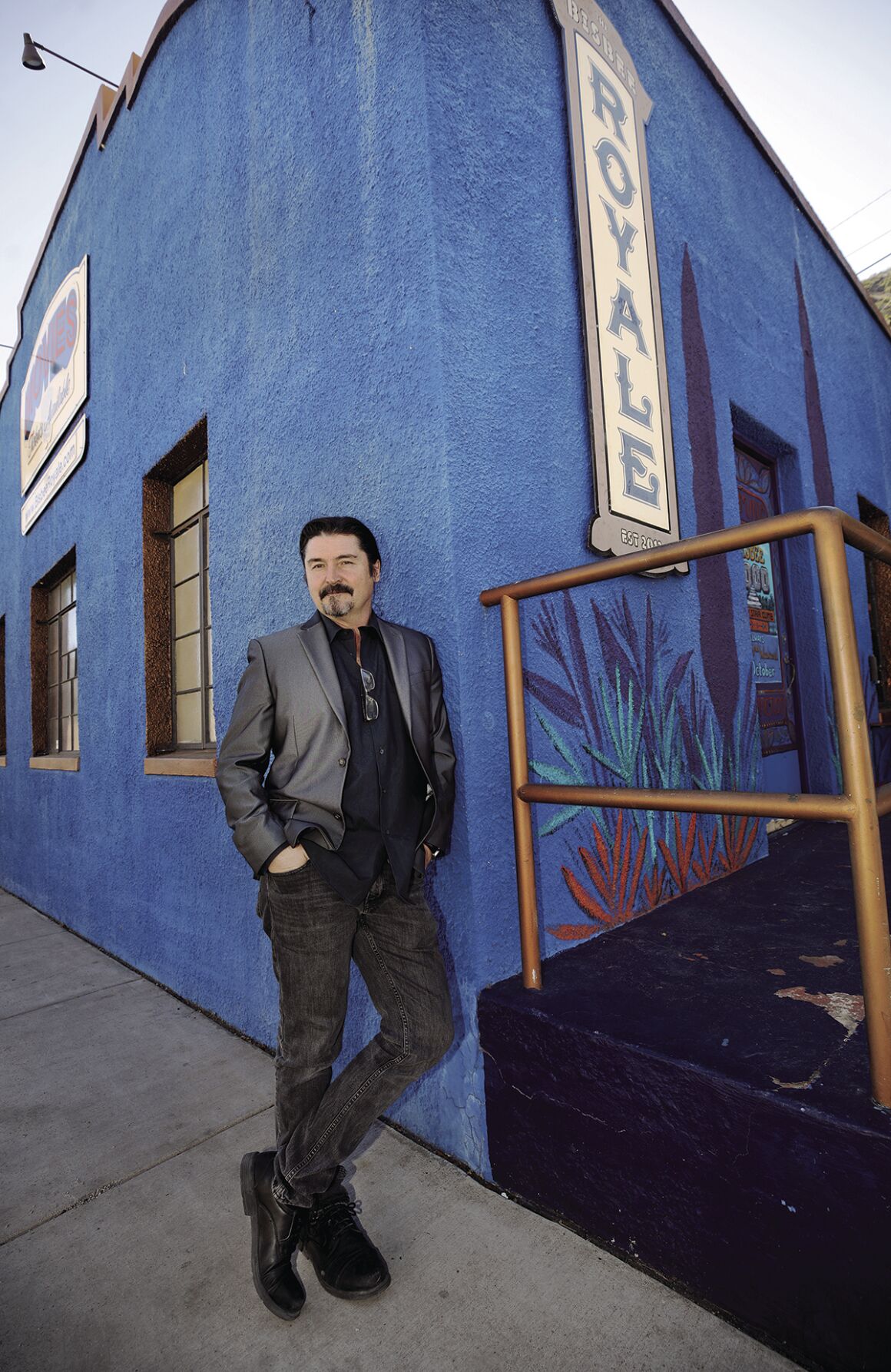 Bisbee artist Michael Page stands in front of the Bisbee Royale. Page and a business partner have purchased the facility.

Michael Page sits in front of his audio/video control computers in the Royale balcony while talking about his digital productions.

Bisbee artist Michael Page stands in front of the Bisbee Royale. Page and a business partner have purchased the facility.

BISBEE – He is known from coast to coast and even south of the border for his innovatIve and imaginative design work, and now his mastery of craft will bring back to Bisbee”s top Bisbee entertainment venue: the Bisbee Royale.

Michael Page, a Douglas native, partnered with Michael Stefaun and purchased the former home of the Bisbee Radio Project in December with big plans to renovate the 102-year-old historic building, which has undergone many rebirths over the years.

It served as a church from 1918 to 1991, then became the Old Bisbee Repertoire Theater home until 2012 when it was reimagined as a music and film venture by Sloan Bouchever. He donated it to the Bisbee Radio Project, which used it until the nonprofit put it up for sale.

Page is excited to help build the music scene in Bisbee and said, “We want to bring our shows up to a level not seen in Bisbee before. We hope to do a concert series and have a continual routine of weekend shows.”

He has contacted Cochise College with the intent to offer the Royale as a venue for a film festival.

The interior will be redesigned, and with Page’s famous flair for jaw-dropping sets produced for the Oscars, the Grammys, the Latin Grammys, Disney and concert shows, plus his award winning album cover designs, the result should be remarkable.

Page studied at Corcoran School of the Arts in Washington, D.C., for three years and then attended the Parson’s School of Design in California until he was hired to do stage props.

“I did the ‘Crypt Keeper’ sets and became known as the guy to go to for gravestones,” he said with a smile. “People said if you want somebody to do gravestones, call Michael Page. It was actually pretty upsetting.”

Top Design, which handled after-parties for the Grammys, gave him a call and his career was off and running.

He also did set design for “The Voice,” “Real Country,” ABC’s “Greatest Hits” and the Academy of Country Music Awards.

One of his favorites was the steampunk setting of a Backstreet Boys live Las Vegas performance in which huge gears, fashioned on old watches, turned and smoke puffed out. He commended the crew, which took his design and made it come to life.

Another was the branding of the Vegas Shania Twain concert that included billboards and the entry to Caesar’s Palace. Twain, at one point, shared the stage with a beautiful white horse.

“It was the first time she ever rode a horse,” Page said. “An instructor taught her to ride and work with the horse.”

His intricate design work begins with photography as everything has to be original artwork to avoid dealing with copyrights. He does all that with only a week or two advance notice. Sometimes, he only gets a couple of days.

“They give me a theme and I’ll go all over to take photographs” he said. “Then, I work 16 hours a day just to make it happen, I have all these people waiting on me, so I don’t think about the time. I have to get it done. If they give me two weeks to do a show, it feels like I’ve been blessed by God.”

He photographs everything – Bisbee sights, night skies, Arizona deserts and mountains, those watch gears. Even his parents’ home and the Gadsden Hotel in Douglas provided detail of the images he created in his mind.

The lavish design of the backdrop for the performance of Lupita Infante in the 2020 Latin Grammy Awards all came from his photographs of his parents’ home and the Gadsden.

“I visualize what I want to do, then make it happen. It’s neat to see my artwork come to life on stage,” he said. “When I get called back to do another job, I know I did a good job. They don’t tell you if you did a good job or not. They just don’t call you again.”

He likes Art Deco, like the county courthouse, and will be styling the new Royale accordingly.

“Now, I’ll be able to practice set design on my own stage at the Royale,” Page said enthusiastically. “It’s my dream come true. I can put my art on stage.”