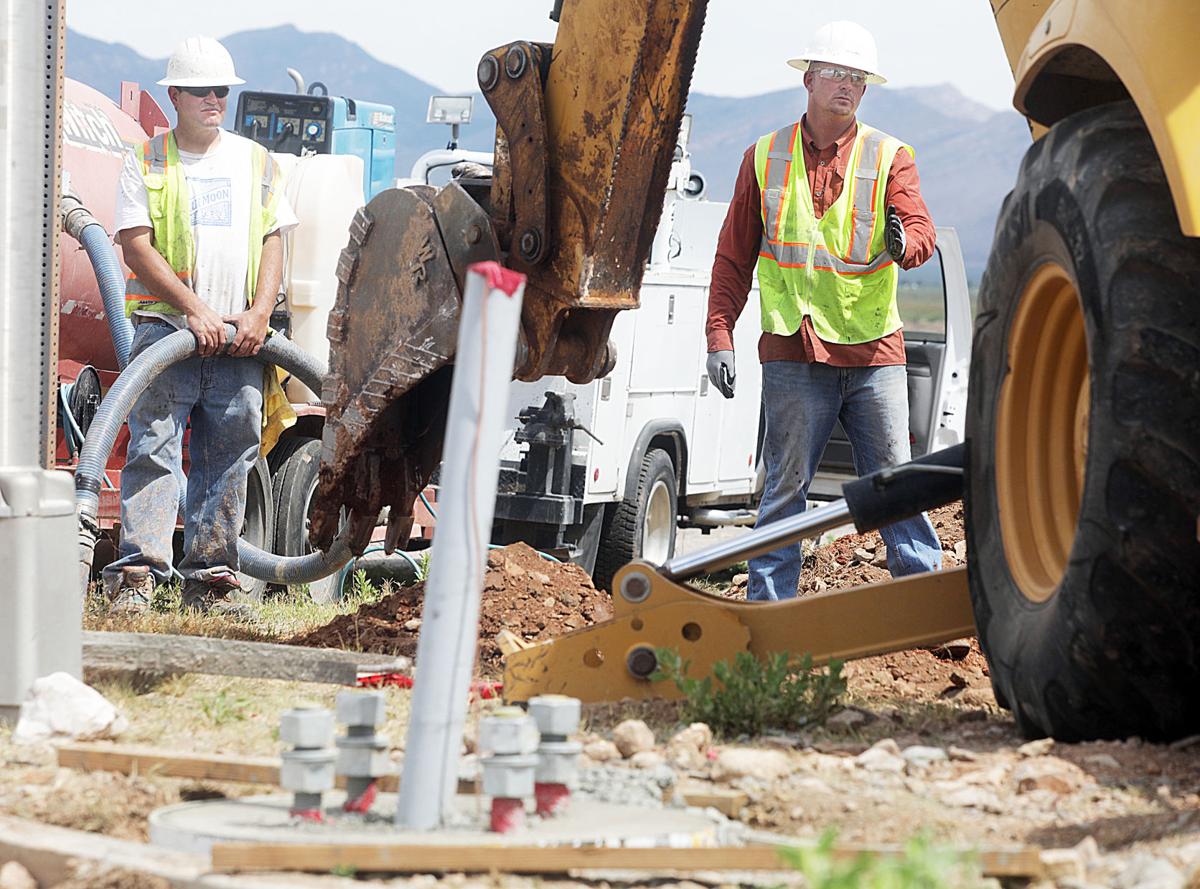 Alpha Underground workers bore a hole along Highway 90 in Huachuca City Friday to accommodate power cables for a set of emergency signals. 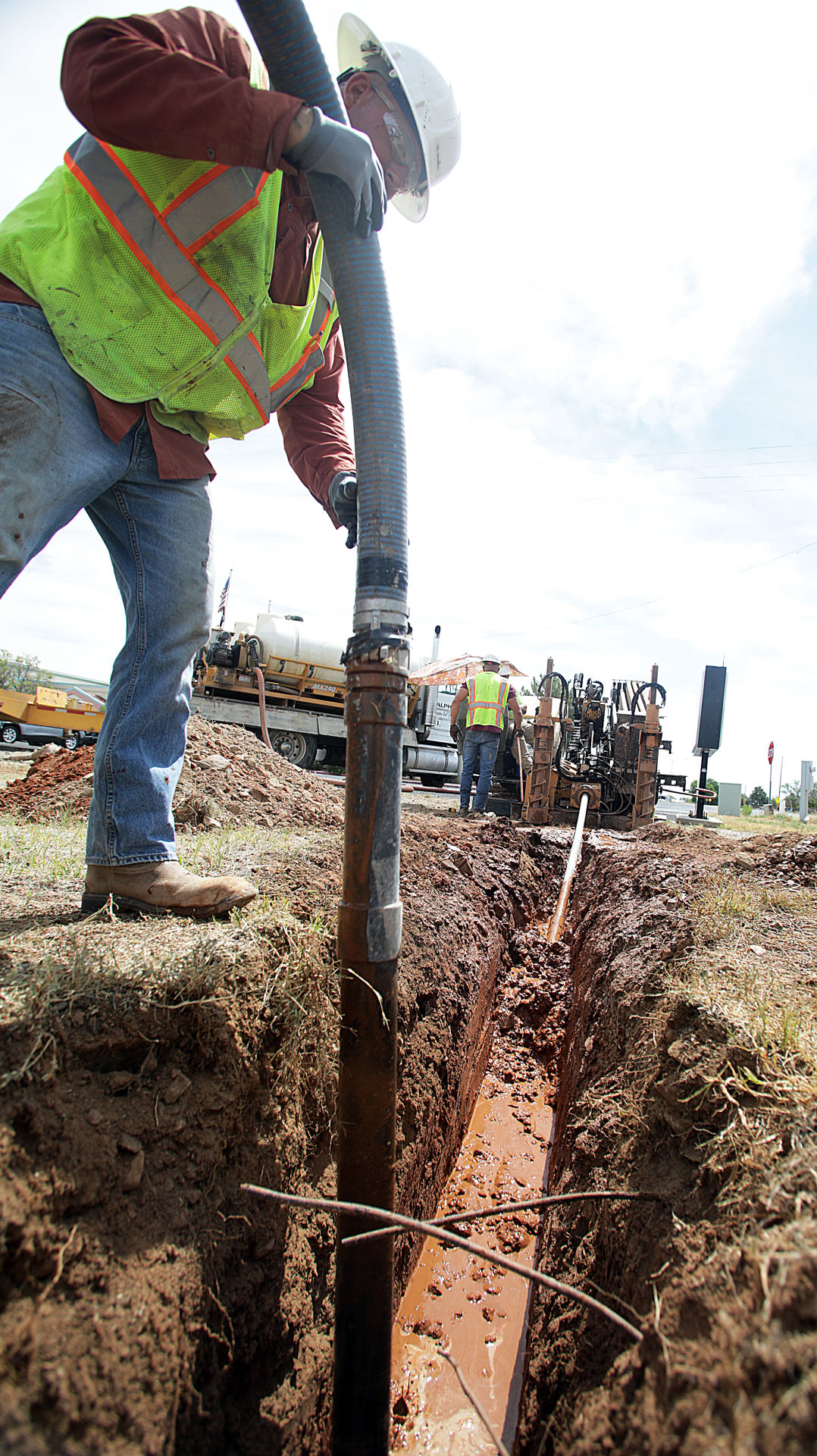 Crews use a directional driller to bore underneath Highway 90 last week in Huachuca City. 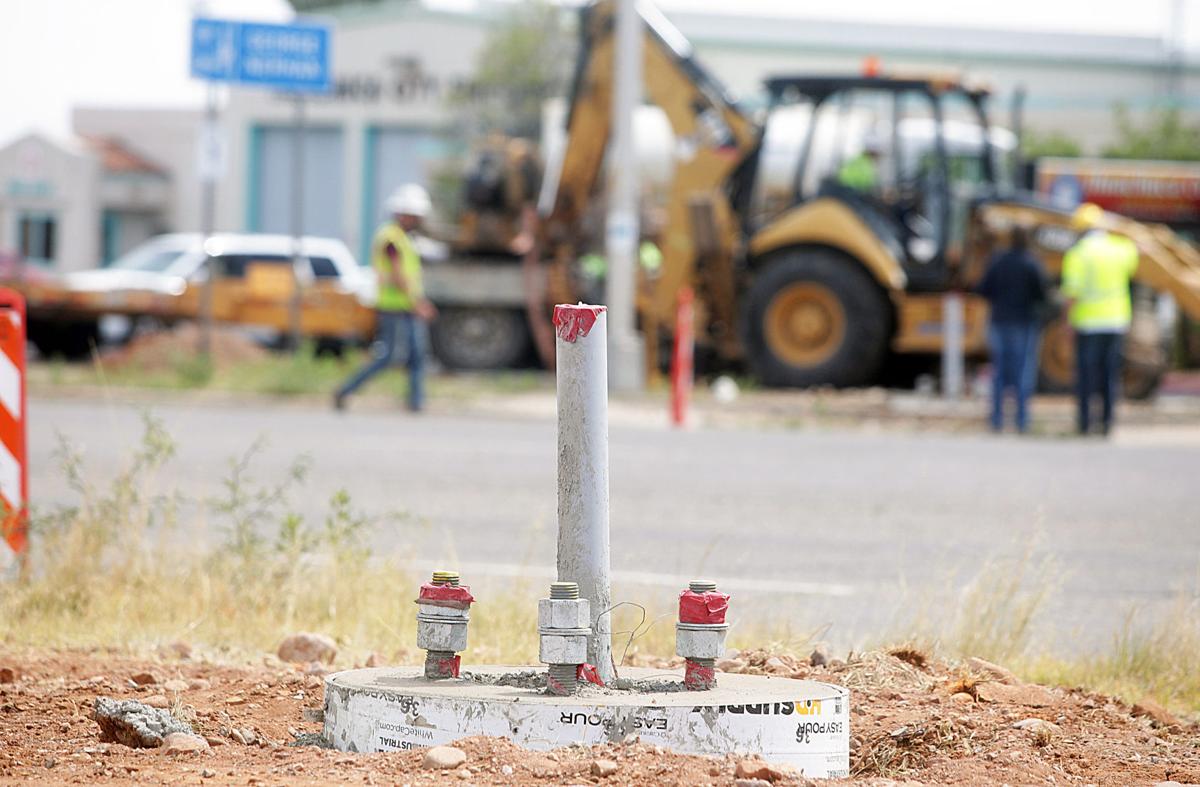 The second foundation structure for a signal pole rests on the western side of Highway 90 in Huachuca City. The emergency signals are being installed to help emergency responders access the highway by warning traffic to stop for police and fire vehicles.

Alpha Underground workers bore a hole along Highway 90 in Huachuca City Friday to accommodate power cables for a set of emergency signals.

Crews use a directional driller to bore underneath Highway 90 last week in Huachuca City.

The second foundation structure for a signal pole rests on the western side of Highway 90 in Huachuca City. The emergency signals are being installed to help emergency responders access the highway by warning traffic to stop for police and fire vehicles.

HUACHUCA CITY — Once completed, concurrent projects that are underway at School Drive in Huachuca City and Camino de Manana in Whetstone will make it safer for emergency responders to access State Route 90.

An Emergency Vehicle Preemption Signal is being installed in Huachuca City, while a flashing emergency beacon is planned for Whetstone near the fire station.

Expectations are that the two emergency signals will provide significant safety improvements for fire and police as they access the highway when responding to emergencies, said Huachuca City building official and zoning administrator Jim Johnson, who was observing one stage of the project’s construction on Friday.

“These emergency signals are fantastic safety features for our first responders and the public, so we were really pleased when this project was approved,” Johnson said. “This is something the town and Whetstone Fire District have wanted for a long time.”

Made possible through collaboration between the Sierra Vista Metropolitan Planning Organization (SVMPO), town of Huachuca City and Whetstone Fire District, $135,000 of the $160,000 project is funded by a HURF (Highway User Revenue Fund) Exchange, according to Karen Lamberton, SVMPO Administrator.

Huachuca City council member Joy Banks represents the town as a SVMPO board member and is credited by Lamperton as “being instrumental in bringing this project forward to the SVMPO board.”

“Not long after joining the organization we discussed potential projects for the town, and the preemption signal came up as a top priority,” Banks said. “The project will increase response times for 911 calls. There are times when oncoming traffic will not stop for emergency vehicles, even when their lights are flashing and sirens blaring. It’s an accident waiting to happen.”

Huachuca City Police Chief Jim Thies spoke of his concerns for fellow officers and the public while attempting to access the highway, especially at peak times when traffic is heavier than usual.

“I’ve had times when I’ve been responding to a critical incident and could not get onto the highway safely, even with my lights and siren,” the chief said. “These emergency signals are about protecting the public and ourselves when responding to emergency situations.”

“I can’t wait to see the completed project and how the public reacts to the signal’s first activation. We’ve never had anything like this in Huachuca City before, and I really welcome this badly-needed safety feature to our community,” he added.

Banks said after discussing the prospect of bringing emergency signals to Huachuca City and Whetstone with SVMPO, the organization ordered a study to determine the project’s feasibility.

“Because of the public safety concern, it became a top ADOT (Arizona Department of Transportation) project,” she said.

On Friday, construction crews were doing a “directional boring” under State Route 90 near School Drive in Huachuca City to run two three-inch electrical conduit sleeves under the highway.

“The purpose of the conduit is so we can connect the power source from one side of the highway to the other,” said SVMPO Civil Engineer Dennis Donovan, who oversees the project. “We have two 45-foot ‘’Type R’ poles that will be installed on each side of the highway in the near future, possibly sometime in July.”

Each pole will have a mast arm with warning signals to stop traffic in both directions.

“We’re going to be installing a different type of warning system in Whetstone,” Donovan said. “Unlike Huachuca City, these lights are solar powered, so we will not be running electrical wiring under the highway. Whetstone’s system will have yellow beacon flashing lights 500 feet north and south of Camino de Manana to alert traffic of emergency vehicles.”

Mountain Power Electrical Contracting, Inc. out of Tucson won the bid for the project, with the emergency signals being constructed concurrently in Huachuca City and Whetstone, Donovan said.

Once installed, the signals will be activated by police and fire officials officials will be equipped with remote radio control devices, said Suzanne Harvey, spokesperson for Huachuca City.

“Traffic signs will be in place to warn travelers that a new traffic control device has been installed. Warning beacons will alert approaching vehicles that they may need to slow down and stop to allow emergency vehicles to enter onto the highway,” Harvey said.

As the work continues, there may be minor delays where traffic may be shifted to one lane during the signal pole installation.

Construction started on June 15 with a concrete structural foundation for the signal poles. The project will continue when the signal poles and mast arms are available for installation, Donovan said. In addition, the work schedule may need to be adjusted because of weather conditions.

“We hope to have this project completed by the end of summer, but that’s if everything goes according to plan,” Donovan said.