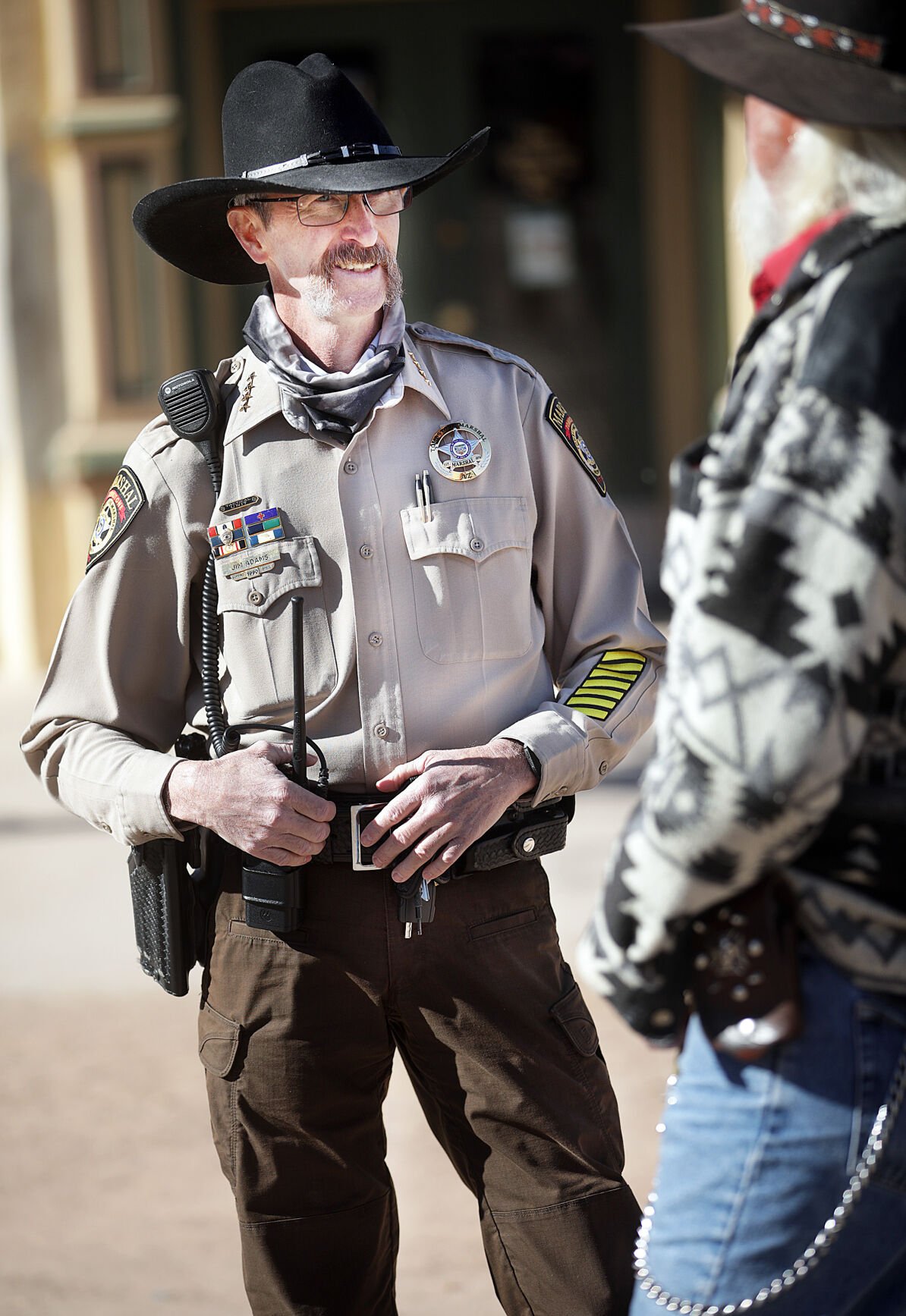 Tombstone Marshal Jim Adams chats with a local while patrolling Allen Street on Wednesday. Adams took over the job as Tombstone marshal in November. 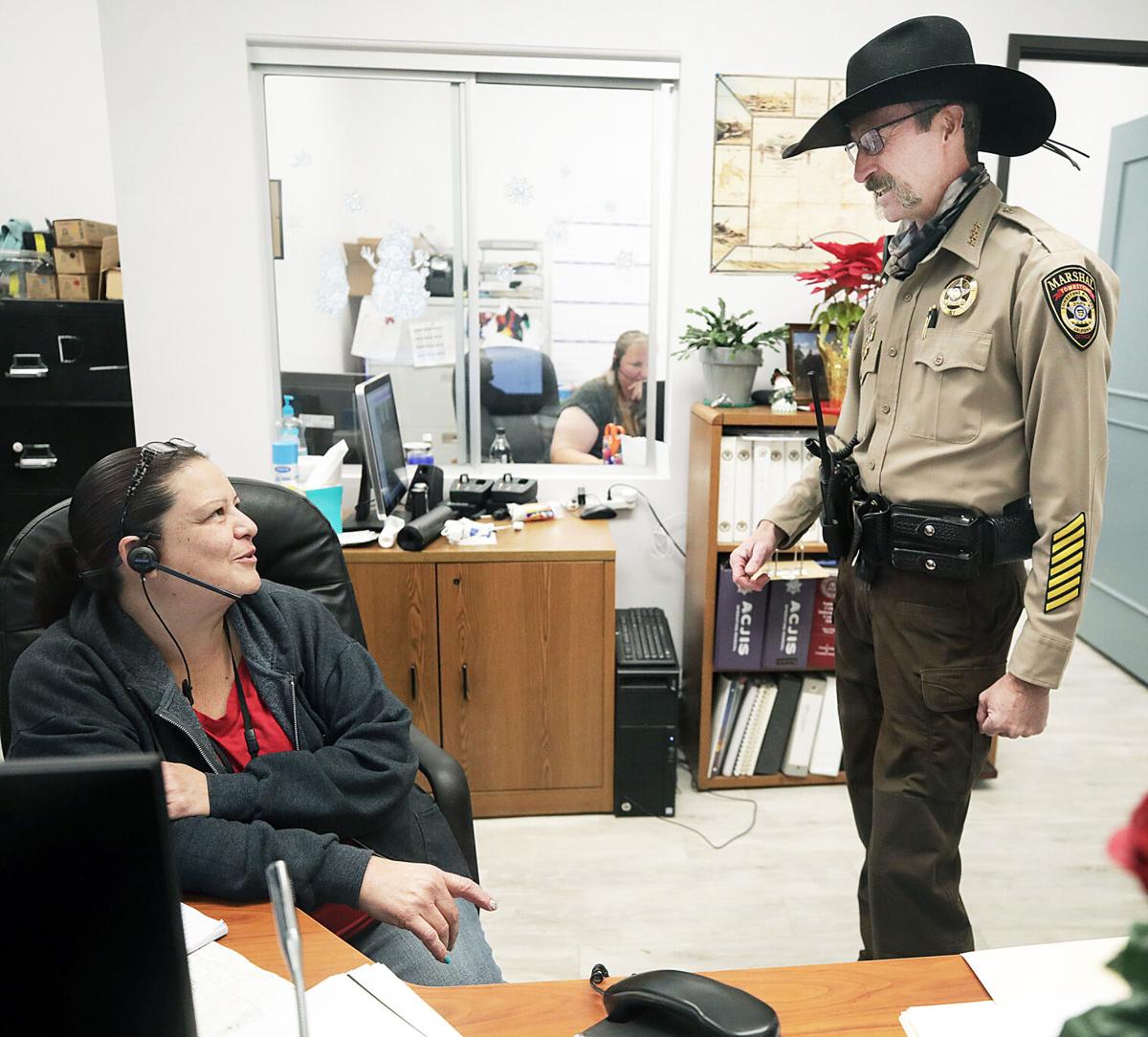 Tombstone Marshal's Office dispatcher Christy Molina talks with Marshal Jim Adams on Wednesday. Adams is a retired detective from the Sierra Vista Police Department who stepped out of retirement to work in Tombstone.

Tombstone Marshal Jim Adams chats with a local while patrolling Allen Street on Wednesday. Adams took over the job as Tombstone marshal in November.

Tombstone Marshal's Office dispatcher Christy Molina talks with Marshal Jim Adams on Wednesday. Adams is a retired detective from the Sierra Vista Police Department who stepped out of retirement to work in Tombstone.

Sworn into office by Mayor Dusty Escapule at a Nov. 10 City Council meeting, Adams was selected to replace Randall, who retired after five years as Tombstone marshal. Randall’s position was temporarily filled by an interim marshal in Tom Alinen — a commander with the Cochise County Sheriff’s Office — until Adams was sworn into office.

Adams comes to Tombstone with an impressive resume in law enforcement, starting in 1990 with the Sierra Vista Police Department. During his 21 years with Sierra Vista PD, he served as the Special Operations Bureau Commander, a position that included selecting, training and supervising special operations detectives and personnel. He also served as the Sniper Team leader for the department’s Special Response Team.

After retiring from the department in 2011, he served as the Crime Scene Investigator with the Cochise County Sheriff’s Office, owned and operated Apocalypse Arms and Military Surplus LLC in Sierra Vista for five years, and served briefly as an adjunct professor at University of Arizona South in Sierra Vista.

From 2012 through 2016, he served as an associate faculty member at Cochise College where he was an instructor in the college’s criminal justice program.

In the following Herald/Review Q&A, Adams talks about his background in law enforcement and how he plans to tap into his experience to help enhance the Marshal’s Office through expanded training and community development opportunities within the City of Tombstone.

Herald/Review: What kind of training did you go through before stepping into the Tombstone marshal position?

Jim Adams: When you leave law enforcement, you have to get reinstated to show that you are still capable of performing in a law enforcement capacity. I retired from the Sierra Vista Police Department in 2011, so I was required to go through the reinstatement process. It’s a process that includes day, night and judgmental shooting, pursuit and evasive driving assessments, a physical fitness test, written examination, polygraph and medical clearance.

As much as I enjoyed retirement, in 2020 I found that I missed working in law enforcement and decided that I wanted to get back to doing something meaningful, which is why I accepted the Tombstone marshal position.

H/R: What do you enjoy most about working as a Tombstone marshal?

Adams: I enjoy the relationships that I’ve made with the community and other departments. When I worked for Sierra Vista PD, I found it was difficult to truly capitalize on the community-based policing philosophy due predominantly to the way the city is laid out. As a tourist destination, Tombstone is very accommodating. It’s a small, close-knit city with a historic district that is easy to navigate in its entirety on foot. This naturally allows for more personal interactions.

H/R: As Tombstone marshal, how does it feel to be following in the footsteps of such historic lawmen as Virgil, Morgan and Wyatt Earp?

Adams: I think every law enforcement agency in the nation has its own lawmen that have made the agency special. They all have their own legends. It’s just that Tombstone’s are right out of the history books and the town’s entire Old West atmosphere feeds into its unique past.

In all my years of police work and prior to coming here, I wasn’t photographed very often unless it was related to a crime scene. But while walking the boardwalk in Tombstone, tourists are constantly stopping me to have their photos taken with a representative of the marshal’s office.

I also occasionally get to hand out junior marshal badges to kids, which is an opportunity to have a positive impact on a young person’s life and to impart on them some basic rules for being a junior marshal. I talk to them about the importance of telling the truth and listening to their parents.

H/R: What do you look forward to most in role as Tombstone marshal?

Adams: The value of having support from the mayor, council and city staff cannot be emphasized enough. It’s a team effort. That being said, building strong relationships within the community is important to me. I also plan to diligently work on expanding the investigative prowess of Tombstone’s deputies through training and experience, as well as improving their ability to respond to tactical situations.