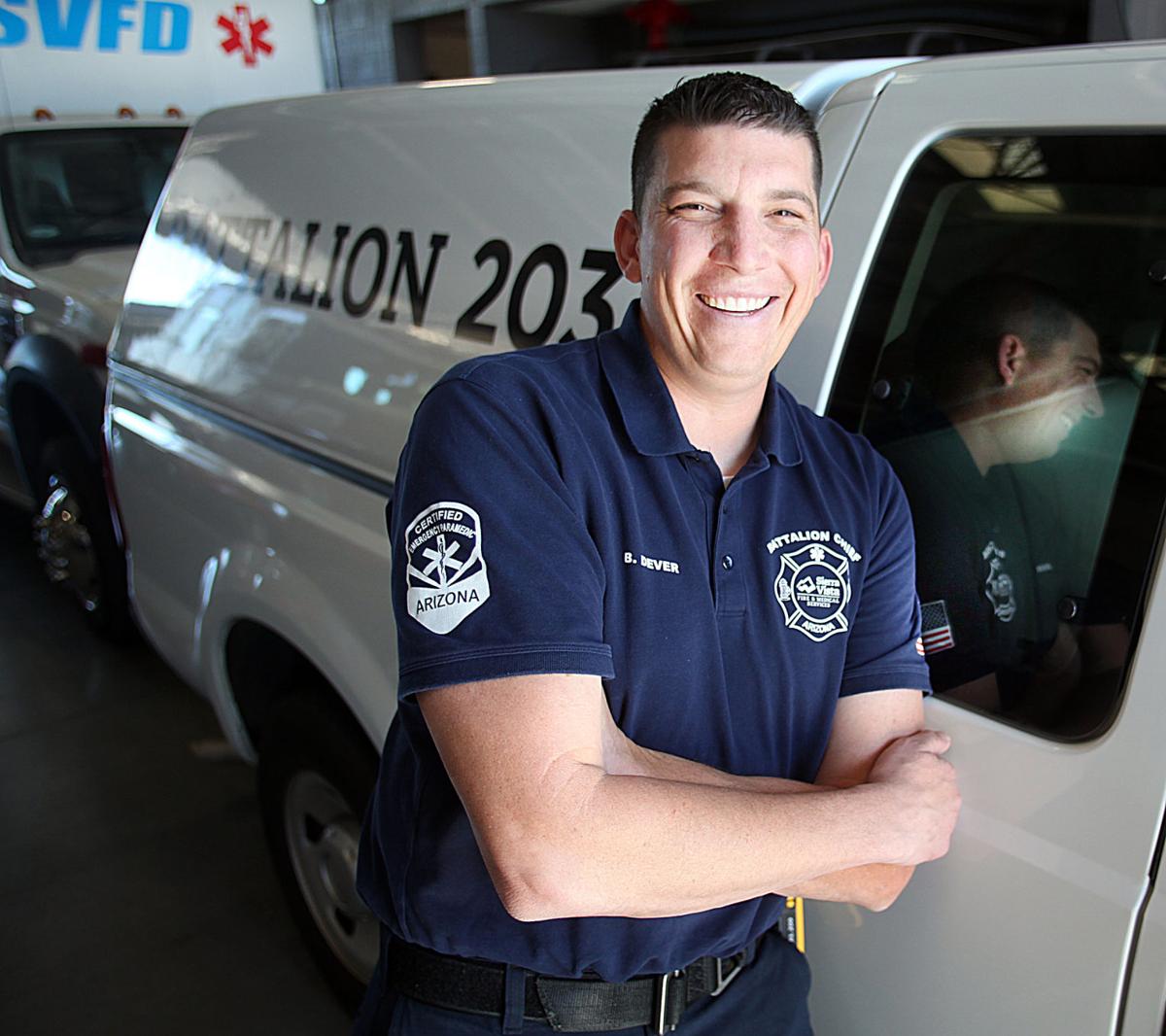 Sierra Vista Fire and Medical Services Battalion Chief/Paramedic Bradley Dever stands in the Station 3 bay. Dever has been a firefighter for over 13 years. 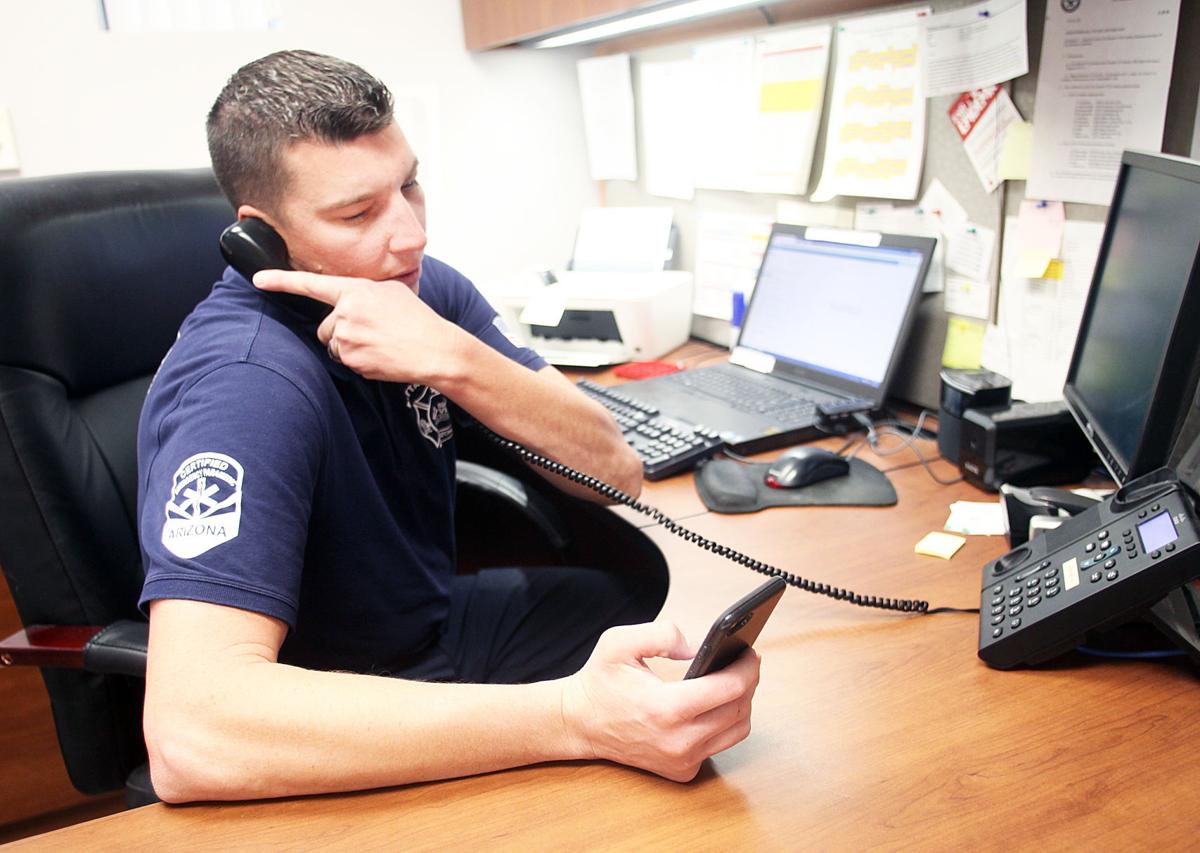 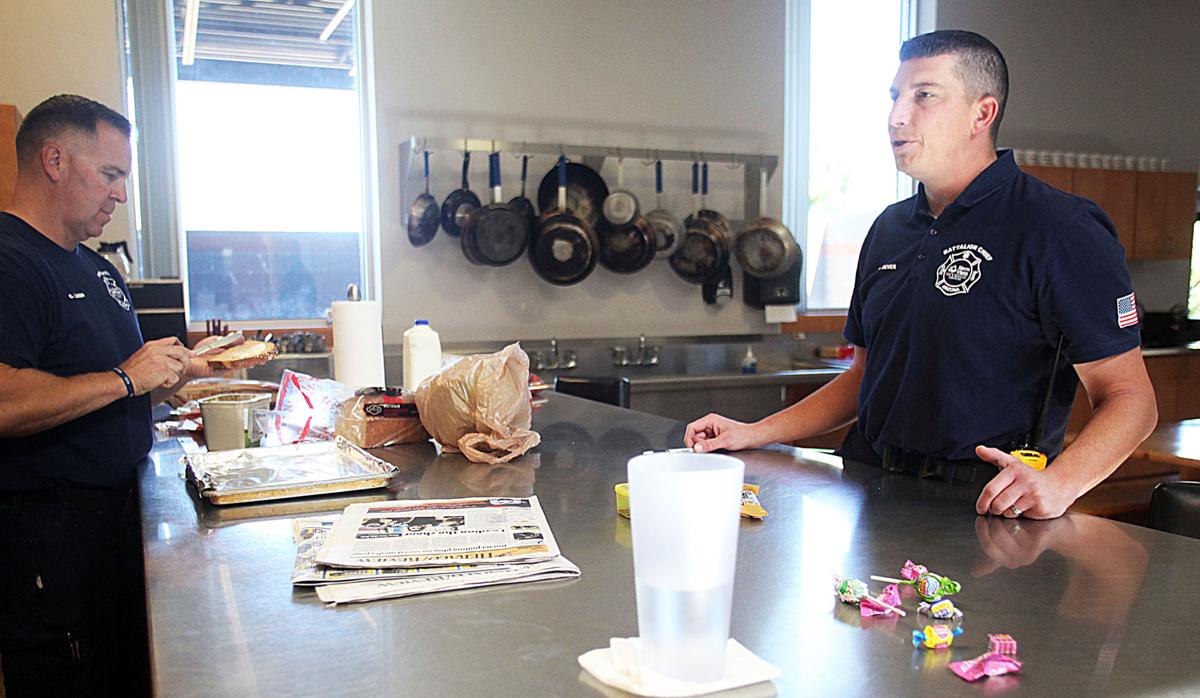 Sierra Vista Fire and Medical Services Battalion Chief/Paramedic Bradley Dever stands in the Station 3 bay. Dever has been a firefighter for over 13 years.

Editor’s note: The Herald/Review is highlighting first responders from various local fire departments throughout our area. This is the fourth weekly installment.

These unsung heroes utilize skill and compassion, and are a small sample of those who are there at a moment’s notice to help those in need.

SIERRA VISTA — He wanted to be in law enforcement, like his father and his brothers. But a ride-along with one of his police officer siblings changed all that in one day.

So, Bradley Dever shifted his focus and set his sights on becoming a firefighter/paramedic. Now, almost 14 years later, Dever is a battalion chief/paramedic with the Sierra Vista Fire Department, a career he says is his true calling.

“This is an amazing opportunity that I’ve been given,” Dever said recently. “I owe it to those around me who have taught me, who have coached me and who have mentored me.”

Dever’s father was Cochise County Sheriff Larry Dever, who served in that capacity from 1996 to 2012. Bradley Dever has brothers who are cops. So naturally, as a child, the 35-year-old thought he, too, would follow in those footsteps.

One night, Dever went on a ride along with one of his brothers. The pair came up on a downed motorcyclist at an intersection. They were the first at the scene. The siblings got out of the squad car and before help arrived, Dever’s brother began directing traffic away from the injured biker.

“My brother was trying to help control traffic. He asked me to try to help the rider,” Dever recalled. “The rider had some pretty serious injuries. I can remember feeling helpless.”

Firefighters, also trained as paramedics, arrived on scene and began helping the injured biker. Dever recalls going to the hospital with his brother to follow up on the motorcyclist’s condition. He watched the trauma team working on the critically injured man and he was hooked.

“I was very struck with how neat an experience that was and that really stuck with me,” Dever said. “I decided at that point that I still loved the emergency side of it, the first-responder aspect of it. But the medical and fire side was probably more my calling than the law enforcement side.

“I feel that, for me, this was a better fit,” Dever added. “I decided I wanted to be in the fire service on that call that day.”

He started his career as a firefighter/paramedic with the Fry Fire District, for which he worked for almost four years. After that, he transitioned over to Sierra Vista Fire and Medical Services, where he has been for the last decade. His most recent position there before his promotion to battalion chief was as a captain.

“It was quite a pleasure to see him rise through the ranks,” Meeker said. “You know greatness when you see it.”

Meeker said part of Dever’s “greatness” is his humility and the way he treats patients and peers alike.

“There’s few people who can’t work with him,” Meeker said. “He’s warm, he is very approachable. He has a way of talking to patients that keeps them calm.”

And those can be difficult moments, Dever says.

“The most challenging part of this job for me is basically having to see the public, members of our community, in such difficult circumstances in their life,” Dever said. “It’s difficult because you see them going through things that you know would crush you and your family if you had to go through those things.”

The father of four children calls his wife, Faith, “the champion of the house,” because she’s a stay-at-home mother who cares for their brood of three boys and one girl, freeing Dever to pursue his dream job.

Dever says the most satisfying part of his job is that he can give back what has always been given to him by family, friends, mentors and peers.

“The most satisfying part of this job is our ability to give back and truly be servants,” he said.