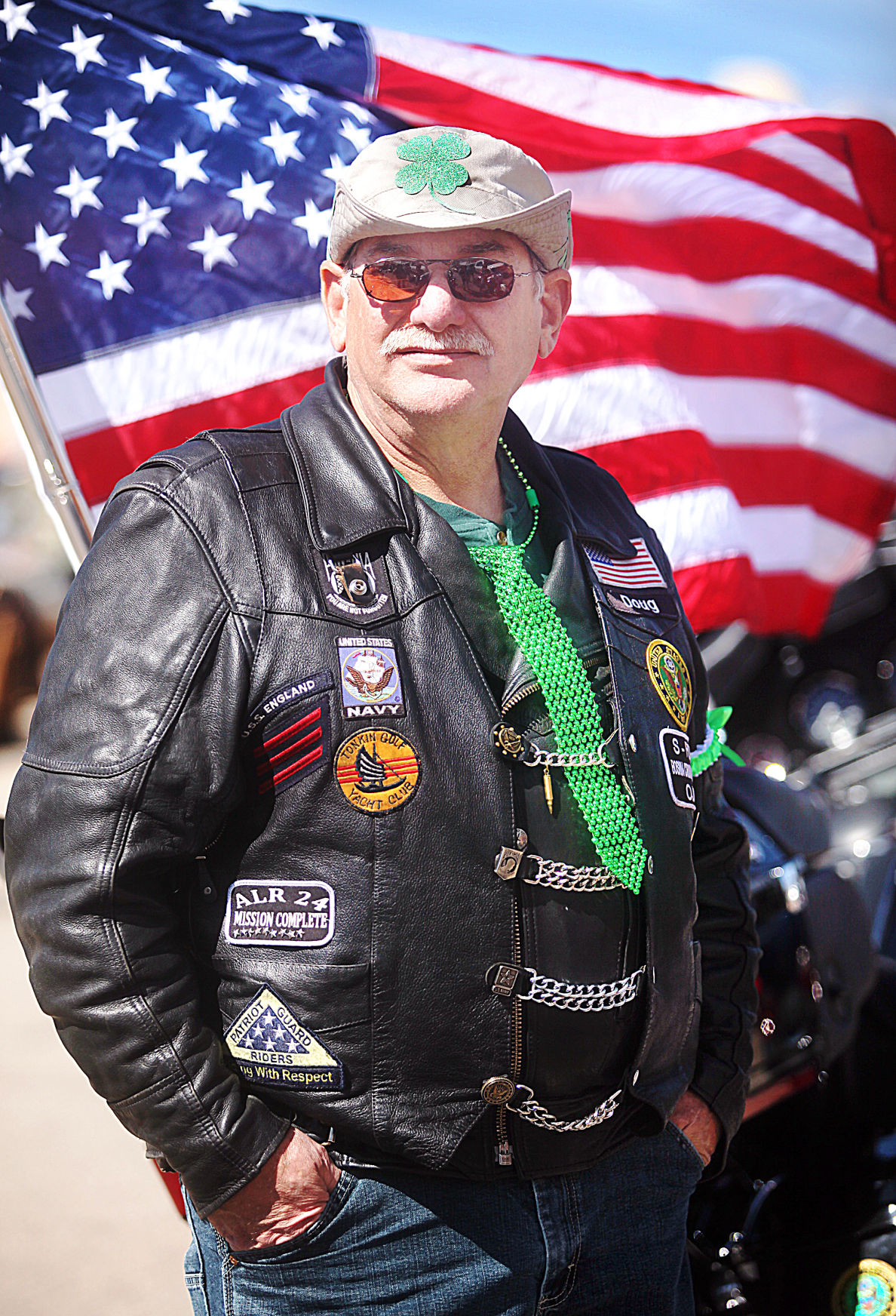 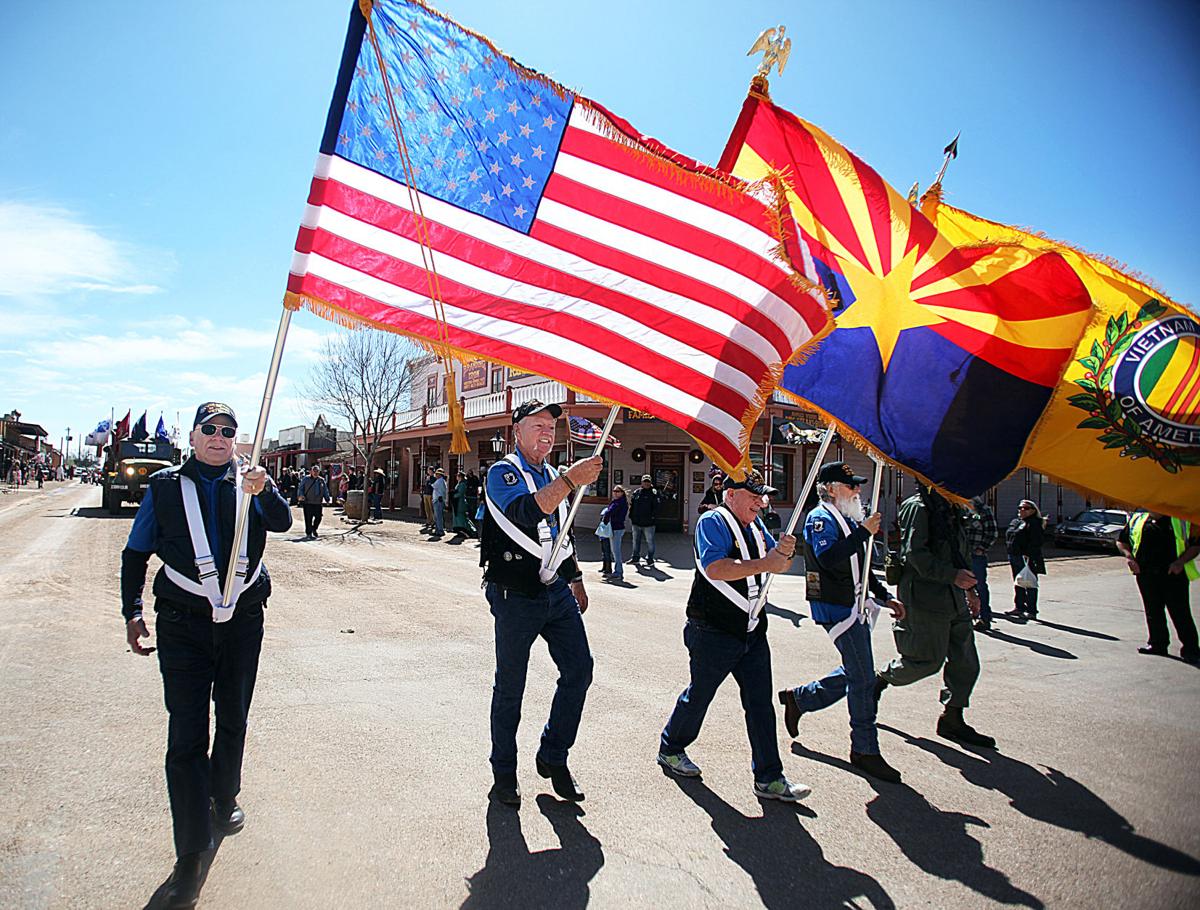 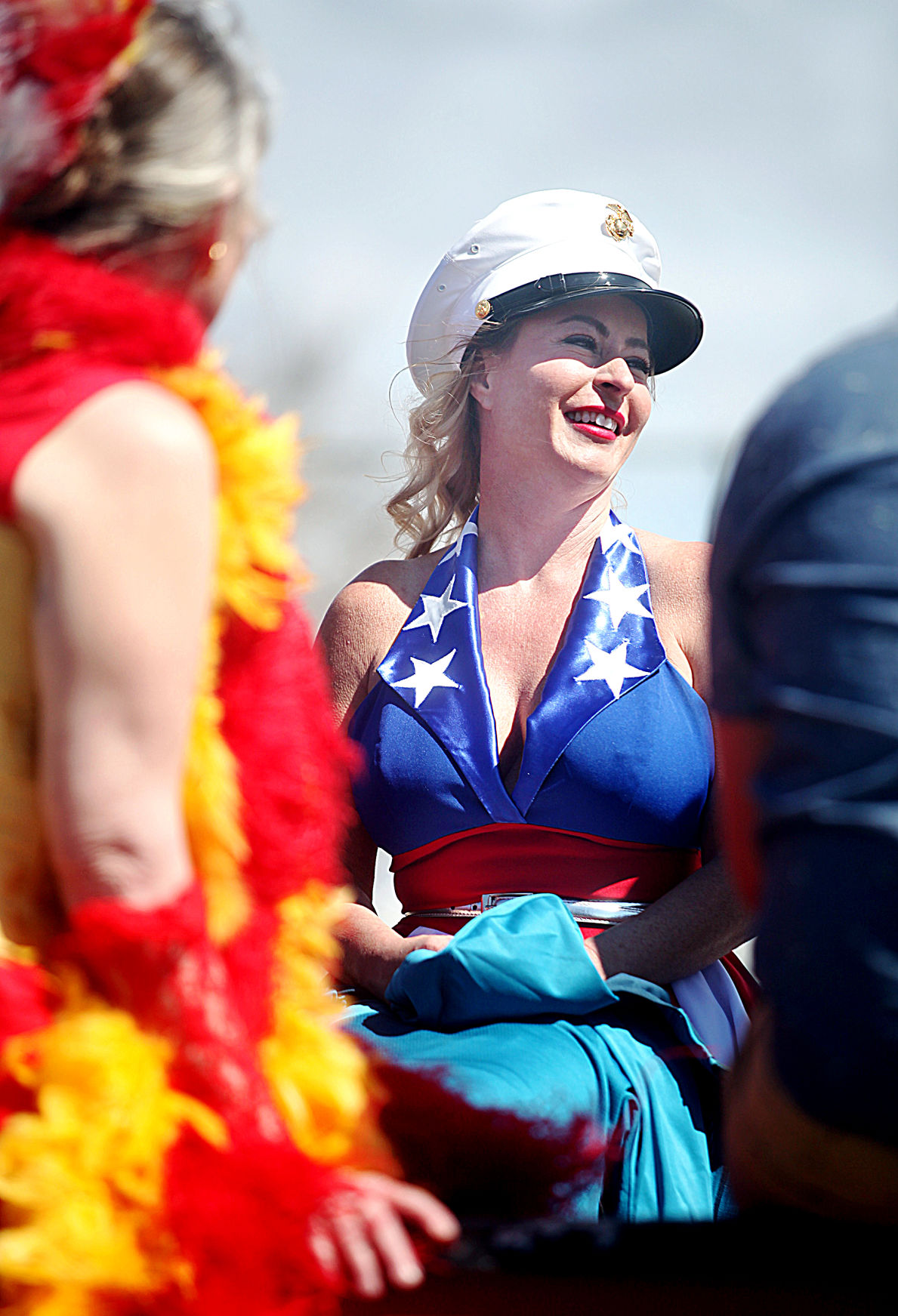 A float portraying various eras of the United States military joins in the fun at the Troops Parade in Tombstone. 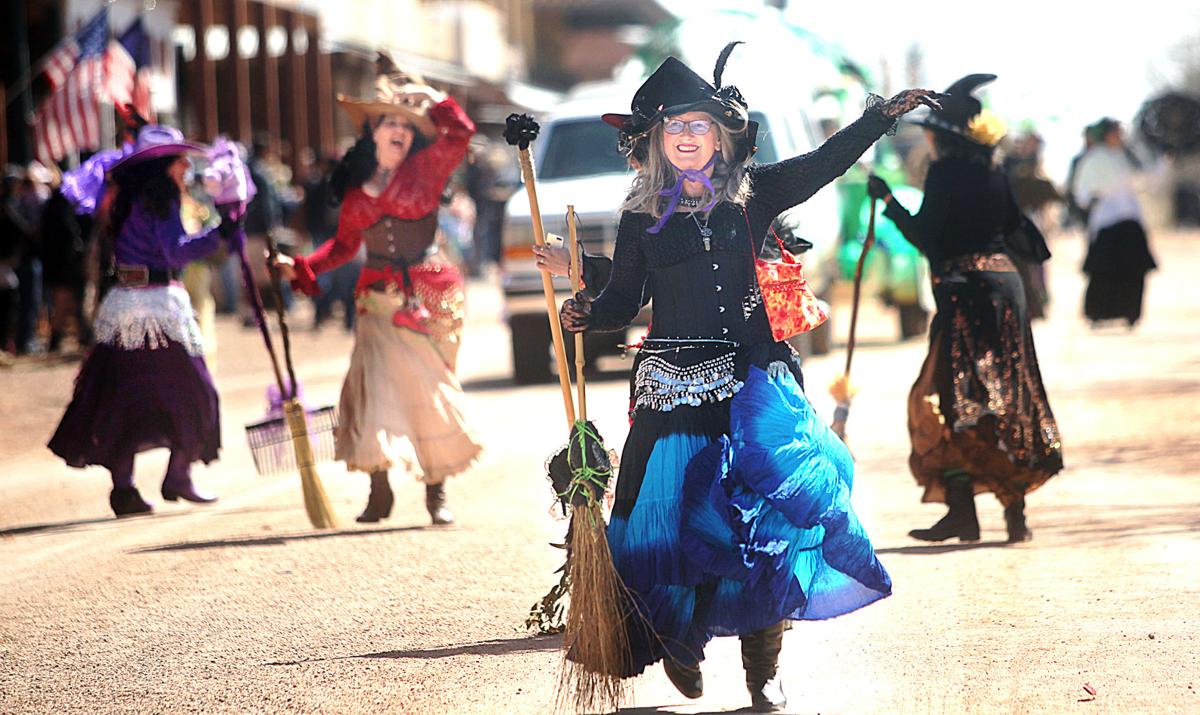 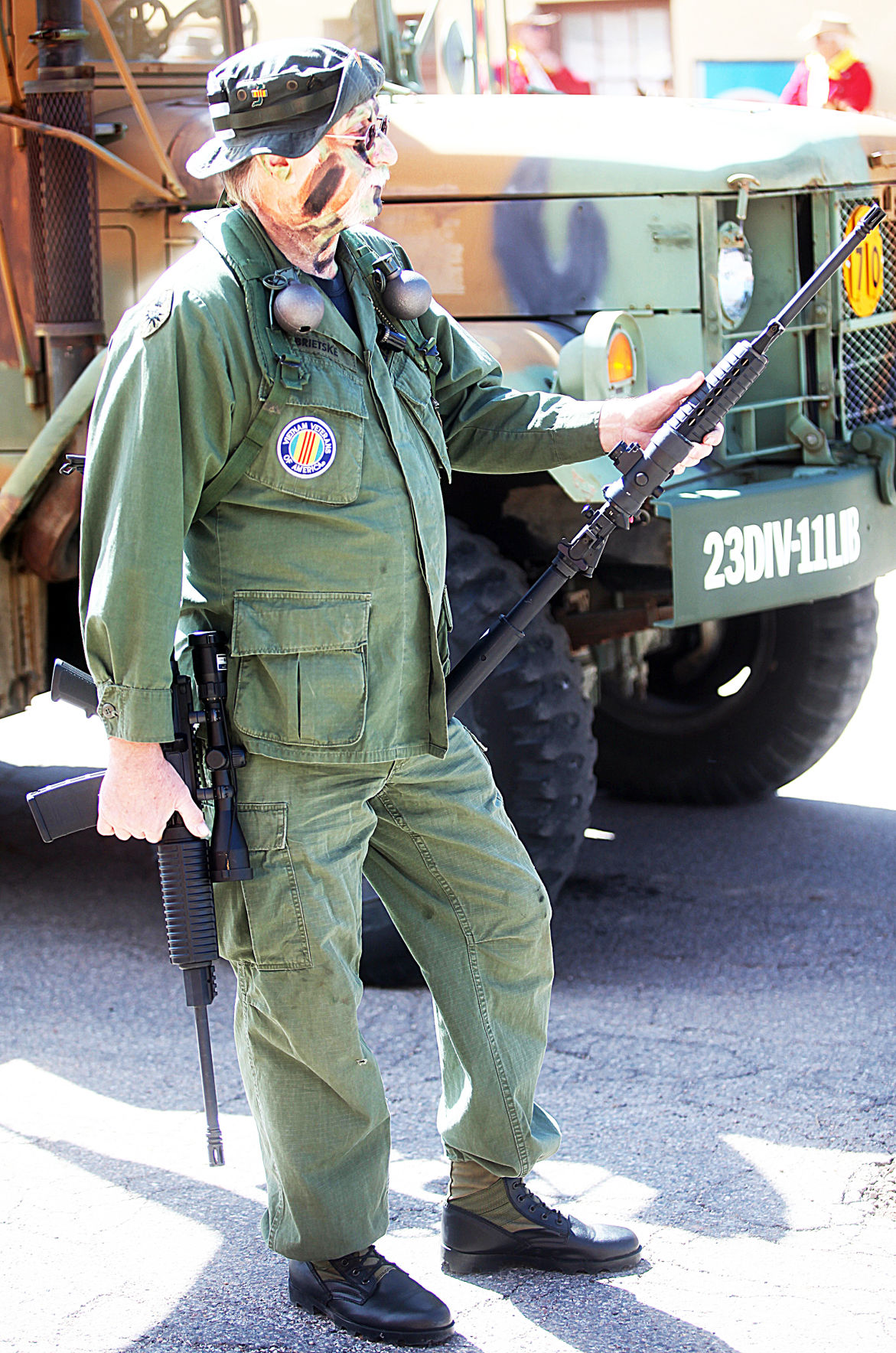 Vietnam Veterans of America member Bob Brietske is at the ready before joining in the festivities. 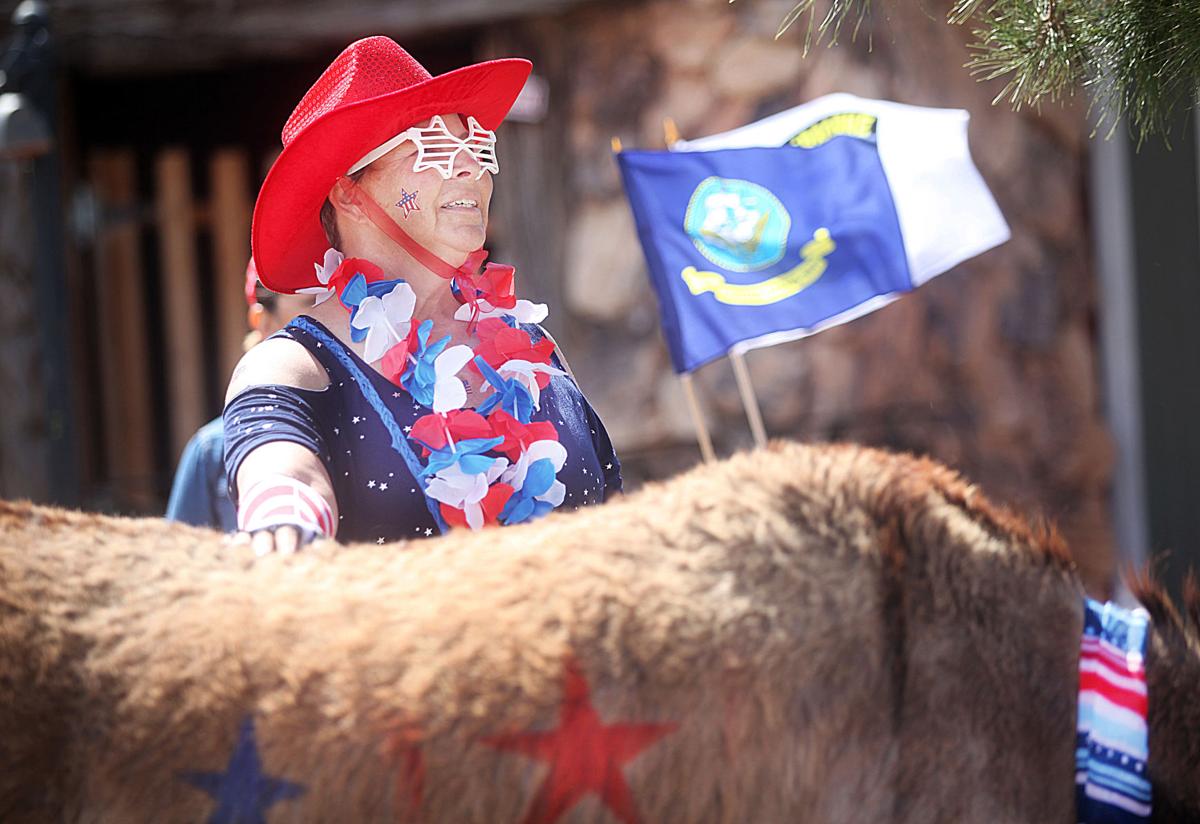 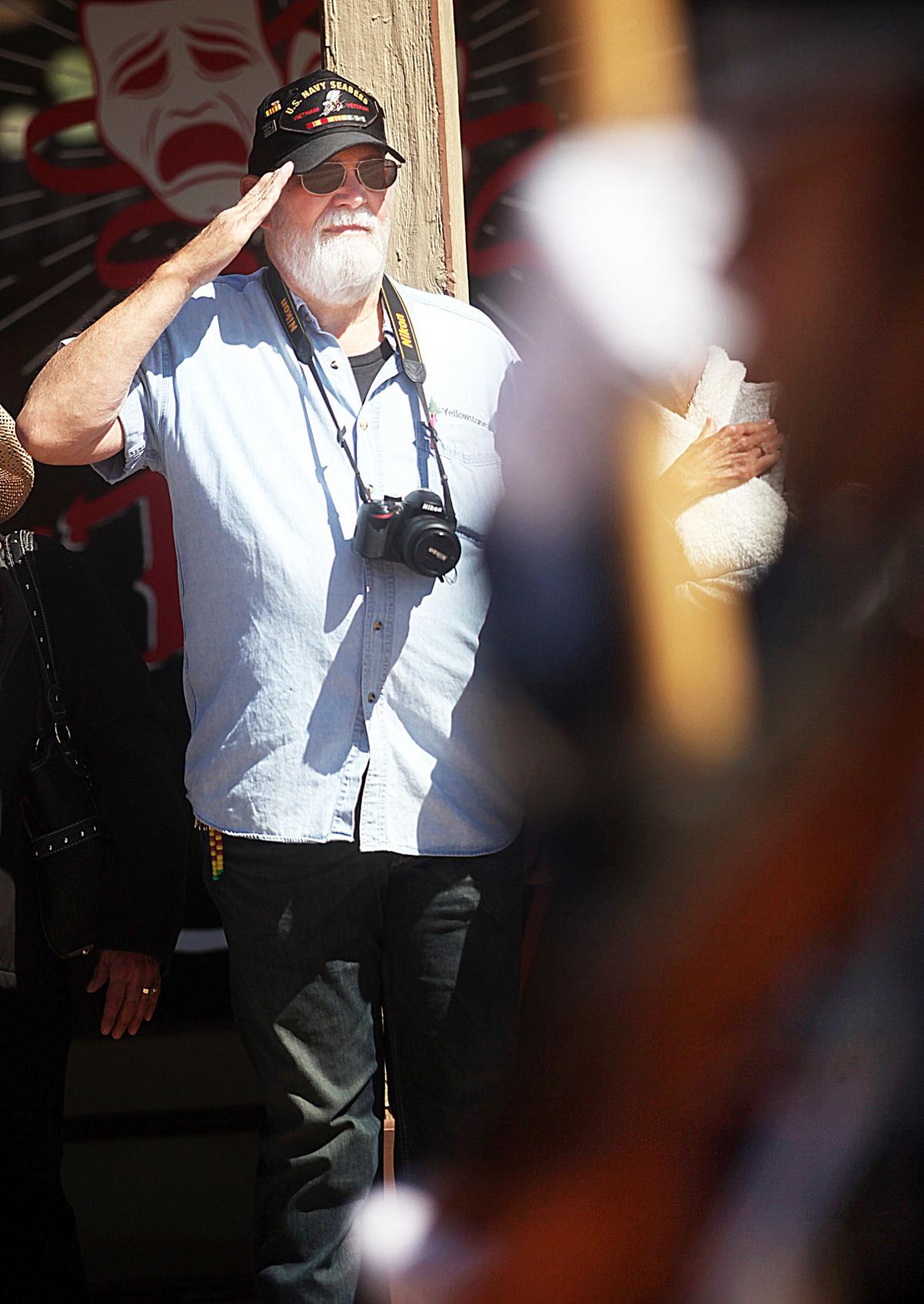 Idaho resident Kay W. Fries honors the colors as they march along Allen Street on Saturday in Tombstone.

A float portraying various eras of the United States military joins in the fun at the Troops Parade in Tombstone.

Vietnam Veterans of America member Bob Brietske is at the ready before joining in the festivities.

Idaho resident Kay W. Fries honors the colors as they march along Allen Street on Saturday in Tombstone.

TOMBSTONE — The 10th annual Tombstone Wild West Days kicked off Saturday with a parade that pays tribute to the men and women of the armed forces.

With plenty of competition from the likes of gunslingers, American Legion Riders, mounted units and floats, it was a group of donkeys that won first place.

Seventeen donkeys and their handlers, decked out in costumes that captured historic military moments, stole the show as they sauntered down Allen Street to an applauding crowd.

“I love the Rosie the Riveter pair,” exclaimed Doris Robbins, a spectator visiting the area from Fort Benning, Georgia. “The whole entry is adorable. They even have the sailor (George Mendonsa) who kissed the nurse (Gerta Zimmer Friedman) from that iconic photo taken in Times Square when World War II ended.”

The donkeys are residents of Forever Home Donkey Rescue & Sanctuary, a facility located between Benson and Cascabel, owned by John and Tish Hiestand.

“Since Wild West Days is organized as a salute to men and women of the armed forces, we decided to go with a theme honoring our veterans and military,” Tish said prior to the parade’s start. “Some of the historic characters we’re representing are Rosie the Riveter, a USO girl, an Army general and a drill instructor.

“We even have a Missing in Action Memory Table that we’re pulling down the parade route.”

While nearly 40 entries had registered for the parade, Saturday’s windy weather caused a few cancellations, said AJ Biami, one of the event organizers.

“Cancellations tend to happen when the weather is uncooperative, but it was still a nice parade with a pretty good crowd,” Biami said.

The Goose Flats Gunslingers, Tombstone Vigilantes and Vigilettes, Wild West Witches of Tombstone, the Vintage Motor Car Club of America out of Sierra Vista, Veterans organizations and Benson Pony Express mounted group are examples of some of Saturday’s entries.

“This is the third year the clinic has brought out leadership to judge the Wild West Days parade, and my second year as a judge,” Ronn said. “It’s a fun parade and a great opportunity to interact with the community and honor our veterans.”

Tombstone business owner and veteran Steve Goldstein was honored as event grand marshal. Goldstein has been a staunch supporter of Wild West Days since its inception 10 years ago.

Celebrity impersonator Mark Staggs is in Tombstone this weekend portraying Festus, the beloved “Gunsmoke” character played for 11 years by the late actor Ken Curtis, with proceeds from his shows benefiting the Tombstone Senior Center.

“I lived in Tucson for about 20 years, so I’ve been in Tombstone before, but never as Festus — just as my regular self,” he said in a brief interview. “I do more than 100 impersonations, but Festus is the one who pays the bills. Festus is the bestus.”

Sponsored by the Wild West Detachment of the Marine Corps League, Wild West Days continues through Sunday with opening ceremonies at 10:30 a.m., followed by street entertainment through the day, ending at 2:30 p.m. with a gun raffle.

“Proceeds from Wild West Days benefit USO (United Services Organization) Arizona,” said event coordinator Bill Pakinkis. “USO representatives are in Tombstone through the weekend to assist us with this event, which we greatly appreciate.”

Tickets for the shows can be purchased at https://tombstonememories.us or Interact on Facebook Event: http://bit.ly/Festus201903.