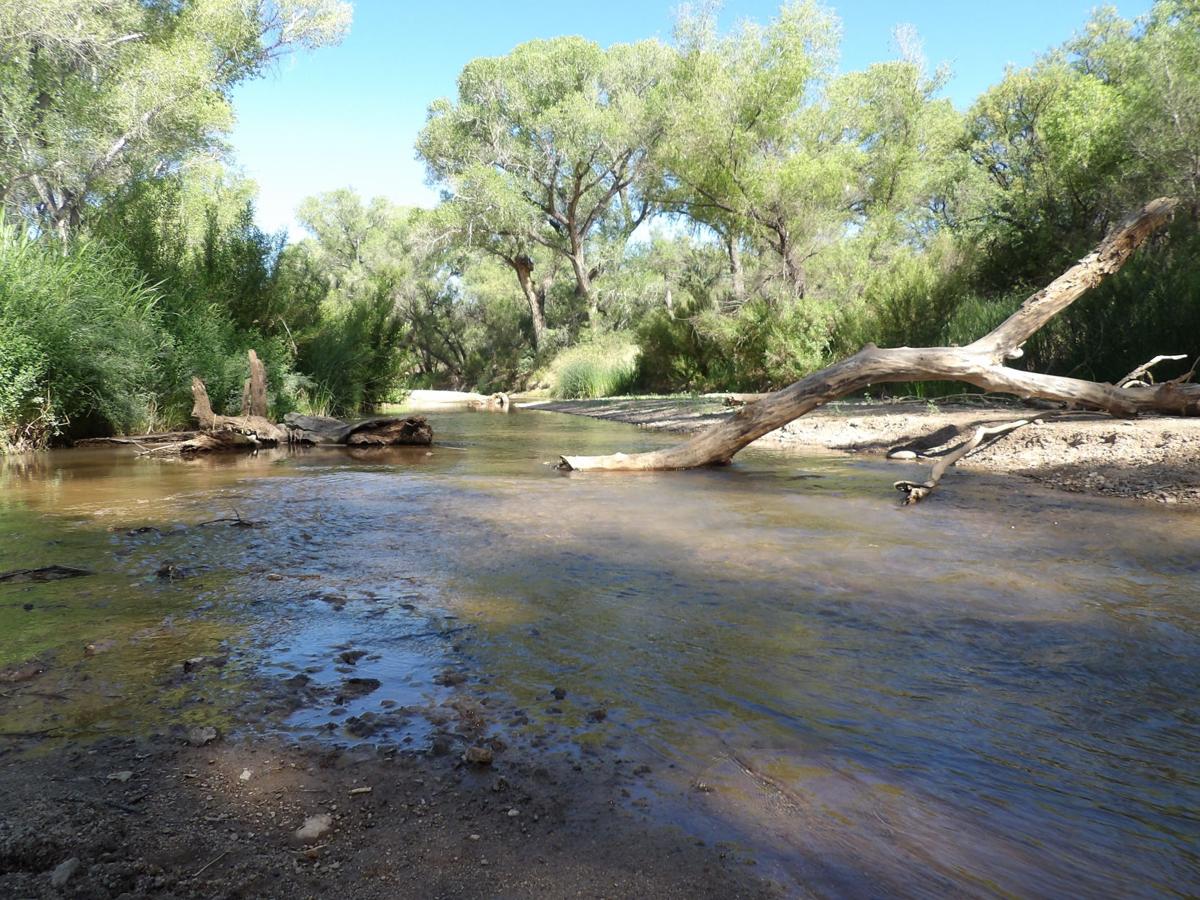 Much of U.S. Southwest left parched after monsoon season

Much of U.S. Southwest left parched after monsoon season

SIERRA VISTA — Climate change is a topic of major discussion these days as drought promotes wildland fires in the West and warmer waters add to the strength of hurricanes and inland storms.

In an effort to offer people more insight on the changes and what the future may hold, the Sierra Evangelical Lutheran Church offered three seminars on the subject led by University of Arizona associate professor and associate extension specialist Gregg Garfin.

He was joined in the first session, The Global Perspective on Climate, by Katherine Hayhoe, atmospheric scientist and professor of political science at Texas Tech University.

The third session, Renewable Resources and other Signs of Hope, featured Garfin and Nicole Hill from The Nature Conservancy discussing state and local energy policy prospects for Arizona.

In the second session, Garfin said precipitation, including rain and snow, has been declining in Arizona. The questionable reliability of groundwater fed by precipitation, population growth and the fragmentation of the landscape’s impact on vegetation and wildlife add up to possible trouble ahead. Just in the 2000s, the temperature has warmed by almost two degrees, a serious matter that he said helps feed problems as soil moisture evaporates.

A decline in snowfall leads to a decline in the snowmelt that allows moisture to seep into the ground, which promotes plant growth, he continued. Warmer winter temperatures can lead to reduced winter rains and snow, which then affects the blooming time of plants, which affects the migration pattern of wildlife looking for food. It also has led to “massive die-offs of conifer trees,” providing ample fuel for wildfires.

“Temperatures could rise by four to six degrees by 2050, and double that by the end of the century,” he said. “If the warming continues on its current path, Sierra Vista is predicted to be more like Tucson, with increasing temperatures and increasing insect pests. An increase in temperature means less water in the ground.”

“In the Colorado River system, it’s been estimated that for every one degree rise in temperature, the flow decreases by five percent. This aridification is expected to continue into the future,” he added.

Crimmins, who zoomed in on Cochise County and southeastern Arizona, explained the topo-climate — the variations of the elevations — creates a diversity of wildlife and all are affected by the monsoon and winter storms that bring heavy snow to the mountains.

Then there is the variability of El Niño Southern Oscillation, which can provide three to seven years of long-term drought or long wet periods. El Niño events tend to shift the jet stream south across the U.S., bringing lots of moisture from the Pacific Ocean.

With climate change added to those factors, there will be warming temperatures, a shift from snow to rain, and increasing evapotranspiration, which increases aridity.

“We have to keep an eye on the idea that we live in an extremely variable place,” he noted. “I’m amazed at the variability of the shift in climate for those of us who live here.”

He explained in the monsoon, thunderstorms will build in the mountains and move down into the valleys. “Certainly, not this summer.”

With the La Niña, which shifts the jet stream north, drier air will probably continue through spring and the state may have to wait for rain in the 2021 monsoon, he said.

Even though past records indicate wet trends, with the increasing rise in temperature moisture in the soil is lost to evapotranspiration and evaporation, he noted. While there may be some great wet winters, the rising temperature counteracts the moisture.

According to projections, Crimmins said Cochise County will continue to see rising temperatures annually. As for average precipitation, that is harder to project due to the variability of the monsoon season and winter storms.

“So, we don’t have a really good understanding on where precipitation is going to go,” he added. “Temperatures are expected to warm dramatically in this century. Can precipitation keep up? Probably not.”

Marshall, in her overview of wildland fires and drought, said that from 2000 to 2015, drier conditions led to more large fires, more acreage burned and a much longer fire season.

She said, “We’re getting a lot more dry, windy days which adds to extreme fire danger. The recent Big Horn Fire blew up and ran up the mountain, burning 12,000 acres in one day.”

By the time the fire near Tucson died in July, almost 120,000 acres of land burned.

She said scientists were predicting “a big increase in annual area burn” of about 960 percent across the western states than what burned from 1960 to 2000. However, there are fires that burn with low intensity and do not reach up into the forest canopies.

“Climate influences what grows back. Conifer seedlings need cool, moist soil. So, if there’s no rain, nothing grows.”

Fires add to the amount of carbon in the atmosphere, which also impacts climate change, adding to warming, she said. The larger, older trees store vast quantities of carbon, which is released in fires. Even so, the carbon released in forest fires is still comparatively small compared to fossil fuel emissions.

She encouraged people to follow firewise.org recommendations to protect their homes from wildland fire by removing flammable brush from around homes and keeping trees at a distance.

Speaking about the San Pedro River, Richter said, “It’s easy to take things for granted when it’s in your own backyard, like the San Pedro River, which is special. It’s more than just a river. It’s a magical oasis that supports a riparian forest with an amazing diversity of wildlife. You can take 10 steps and go from one environment to another.”

Twenty years ago, she said, “pundits claimed the river was dead. Now, it’s an oasis.” That is due in part to aggressive water conservation efforts, recharge projects and reuse of treated sewage like the Sierra Vista Environmental Operations Park, which has not only created a mounding of water beneath the lagoons to help the river, but also made a wetland sanctuary in the desert.

The Cochise Conservation and Recharge Network, a partnership of Cochise County, The Nature Conservancy, Sierra Vista, the Hereford Natural Resource Conservation District and Bisbee, have managed to secure about 25 miles of land along the river in strategic places where recharge projects are planned to put water back in the aquifer and slow stormwater flow to prevent erosion and allow percolation into the soil.

Though funding is still being sought, testing on soils has proceeded to find the best locations to accomplish the main goal of getting water back in the ground.

“Every gallon of water we pump from the aquifer is a gallon of water that could have made it to the ecosystem of the river,” she said. “Groundwater is essential to keep the river flowing in times of no rain. We need to conserve and not waste water. Be aware in our roles in making sure we are using water wisely. The community needs to see the value of the river.”

To view the three seminars, go to https://www.selcaz.org/ and scroll down to “Services.” Click on the link to listen to the Zoom meetings.