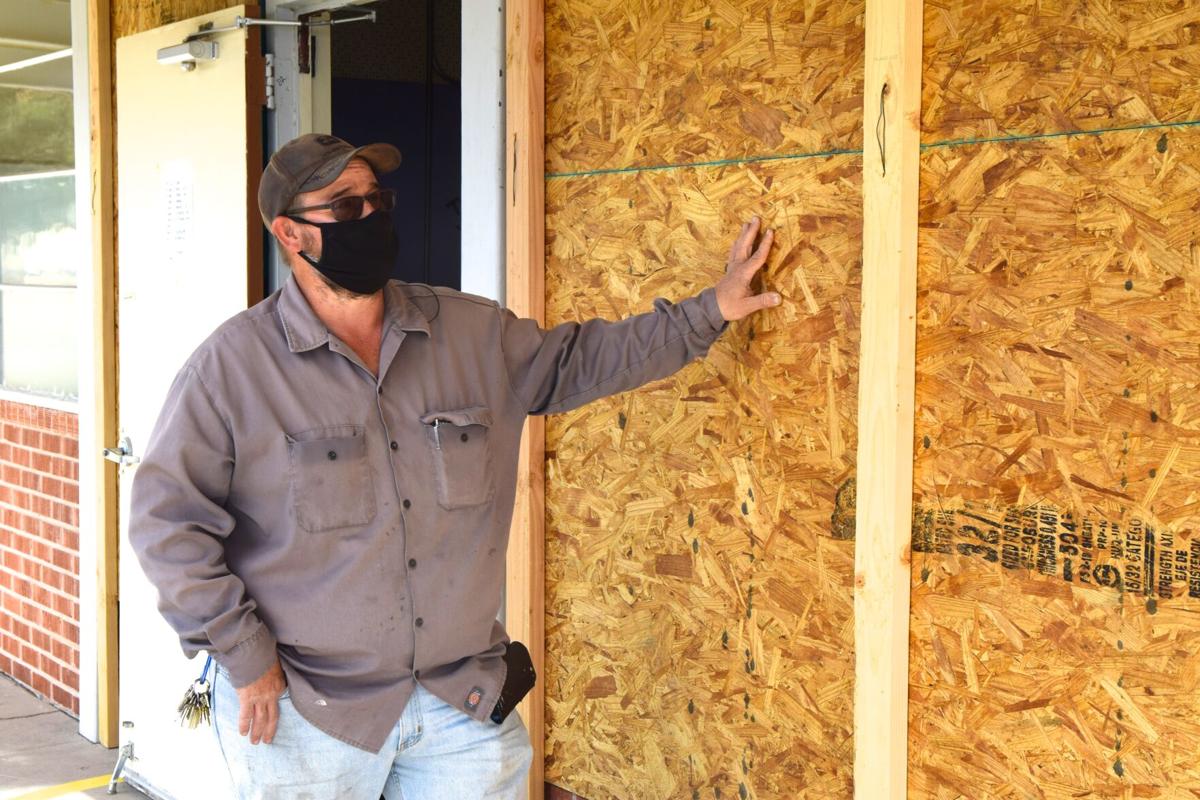 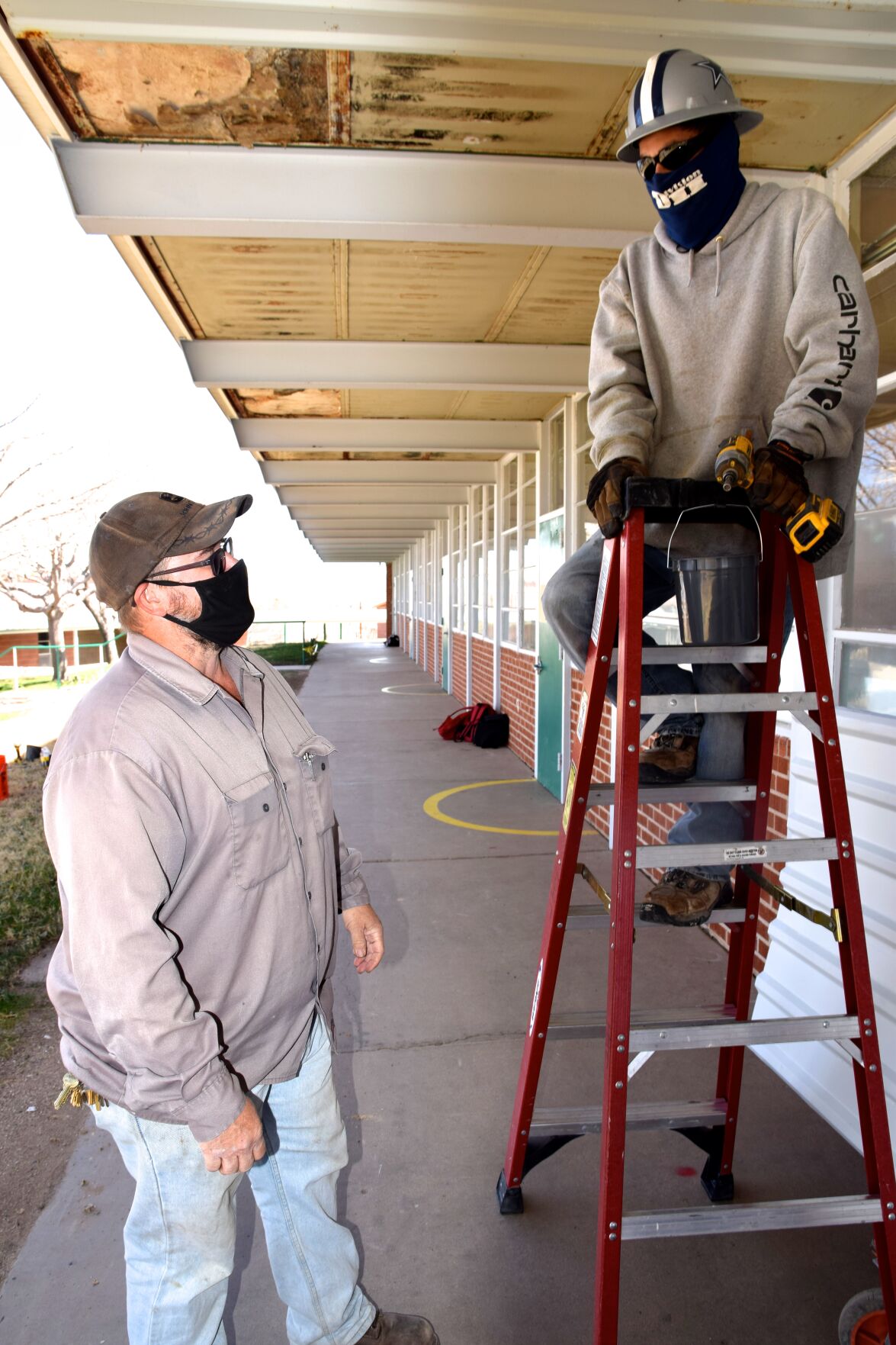 Ed Davis, facilities maintenance supervisor at Walter J. Meyer School in Tombstone, chats with Pat Aguilar, general carpenter for Division II, a Tucson construction company that was contracted to do a weatherization project at the school. 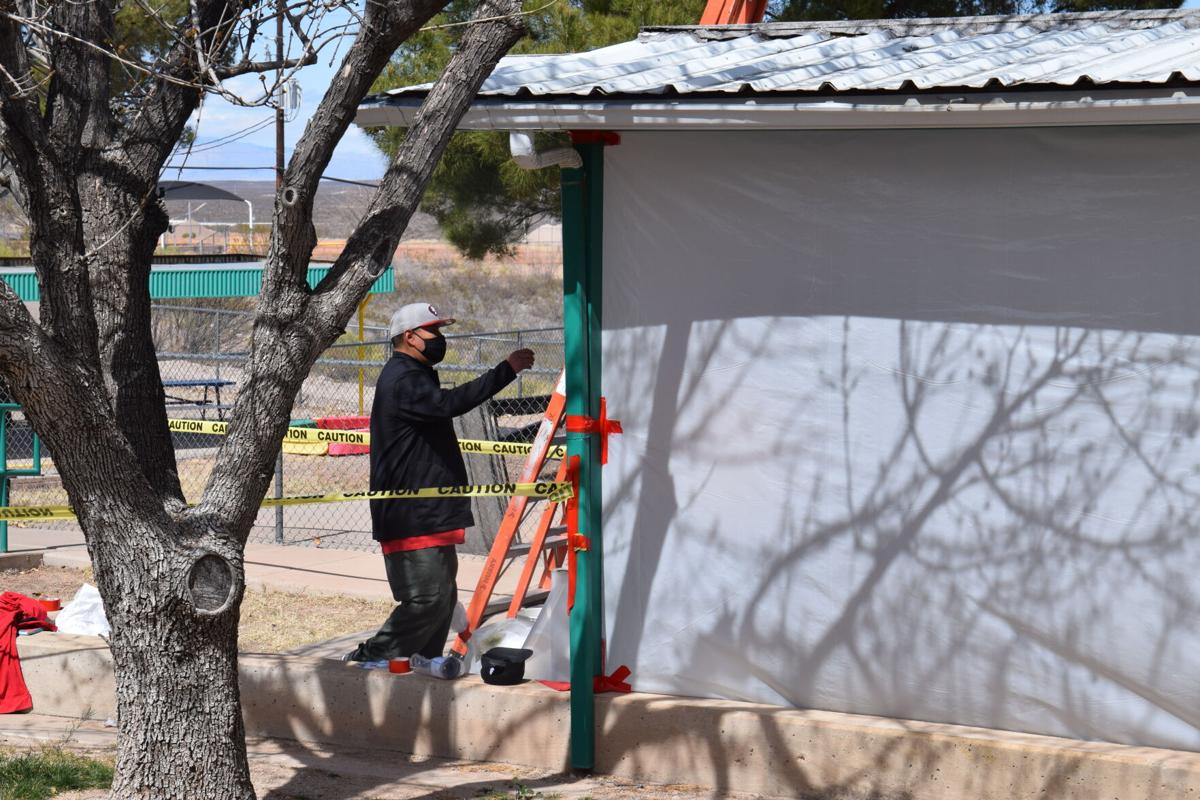 An area of the Walter J. Meyer School library building is encased with protective plastic while Southwest Hazard Control crews work on an asbestos abatement project.

Ed Davis, facilities maintenance supervisor at Walter J. Meyer School in Tombstone, chats with Pat Aguilar, general carpenter for Division II, a Tucson construction company that was contracted to do a weatherization project at the school.

An area of the Walter J. Meyer School library building is encased with protective plastic while Southwest Hazard Control crews work on an asbestos abatement project.

Funded by the state School Facilities Board, Division II Construction of Tucson was contracted to do the work. Crews will be replacing rotted fascia, corrugated panels and removing outdated windows and doors.

“Along with the windows and doors, this weatherizing project includes new paint, caulking, trim and anything on the outside of buildings to improve energy efficiency,” said Ed Davis, the school’s facilities maintenance supervisor. “Some of these buildings were constructed in 1956. Old windows are being replaced with double-pane windows that are going to save us a bunch of money on heating and cooling costs.”

Once construction was underway, more problem areas were discovered in different parts of the campus, mostly related to roofing.

“On the main building and cafeteria they found rotted wood and insects in the overhang sections,” said TUSD Superintendent Robert Devere. “This same condition appears to continue beyond the overhang area and extends throughout the roof. This is beyond the scope of the weatherization project, so we will be filing a new Building Renewal Grant (with SFB) to address this issue on both the main and cafeteria buildings.”

The removal of a series of swallow nests along the school’s gymnasium overhang presented another unexpected issue.

“All swallows are protected under the migratory bird act of 1917,” Davis said. “If there is no egg or a hatchling in the nest, which is the case with these nests, they can be removed.”

The school district turned to SFB for funding to remove the mud nests the swallows had been building through the years.

Once the funding came through, a company called Critter Control — known for its humane and environmentally responsible techniques for handling animal problems — was contacted for the project.

“Now that the nests have been removed, Critter Control will be coming back to install bird sloping, which creates a 45 degree angle where the soffit meets the building’s wall,” Davis said. “The angle prevents the birds from getting the footing they need to build their mud nests. When it’s time for them to migrate back here, they’ll find another nesting area,” said Davis, who added that the swallows would “dive bomb” children who got too close to the nesting area while out on the playground during recess.

“The swallows are a nuisance because their mud nests deface the outer walls and eaves of buildings, and they return to the same nesting areas every year,” he said.

In another area of the campus, Southwest Hazard Control of Tucson was working on asbestos abatement behind heavy sheets of plastic that encased areas where asbestos was a concern.

“When we got approved for the weatherization project, another company came out and sampled everything around here,” Davis said. “What they found is that all of the caulk that seals the windows and doors has minute amounts of asbestos in it. The asbestos didn’t present a danger because it was already encapsulated. If we had not been replacing windows and doors, we wouldn’t even be worried about it. But because window and door frames have to come out, so does the old caulking, which contains the asbestos,” Davis explained.

During spring break, Devere said there will be a lot of activity on campus as crews continue working on different projects.

“Although construction is noisy and messy, we are thrilled to have this project underway,” Devere said. “We greatly appreciate the support and funding provided by SFB and in particular, our liaison, Deborah Norris.”