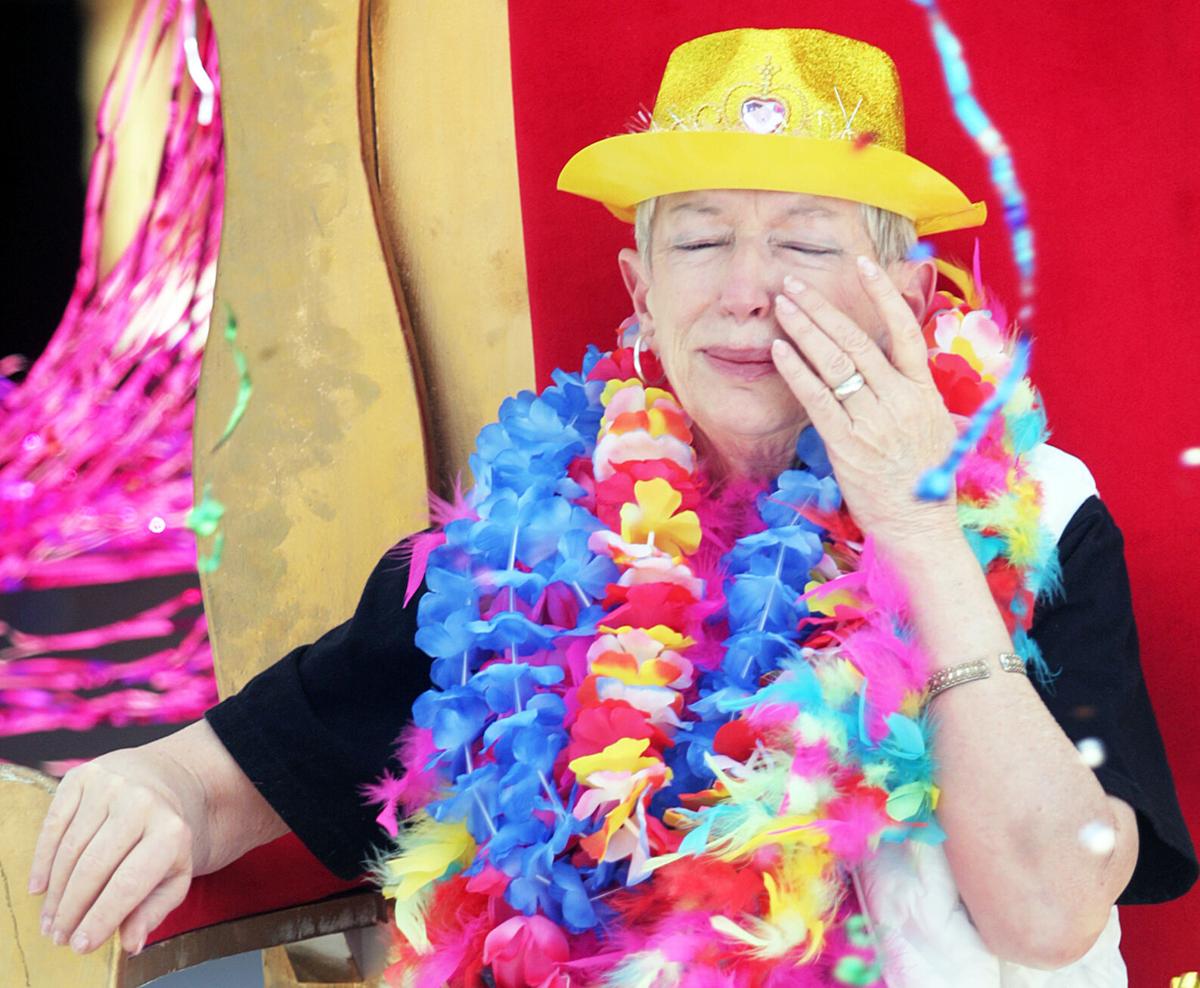 Buena High School’s longtime employee, Elaine Carlson, wipes away tears of joy during her surprise drive-through retirement party in front of the school. 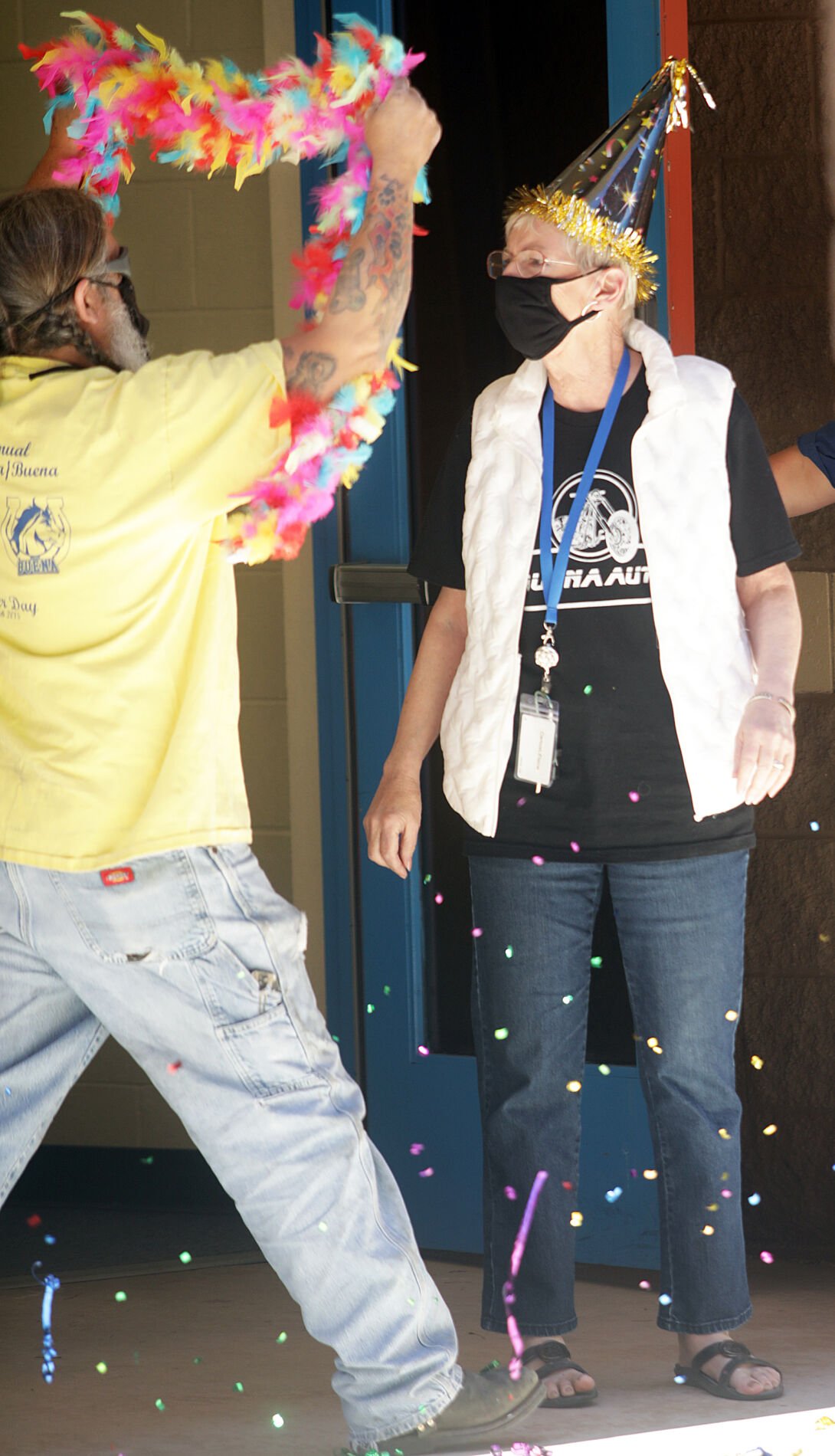 Retiring Buena High School counselor Elaine Carlson is in for a surprise as she is coaxed from the building on May 28. 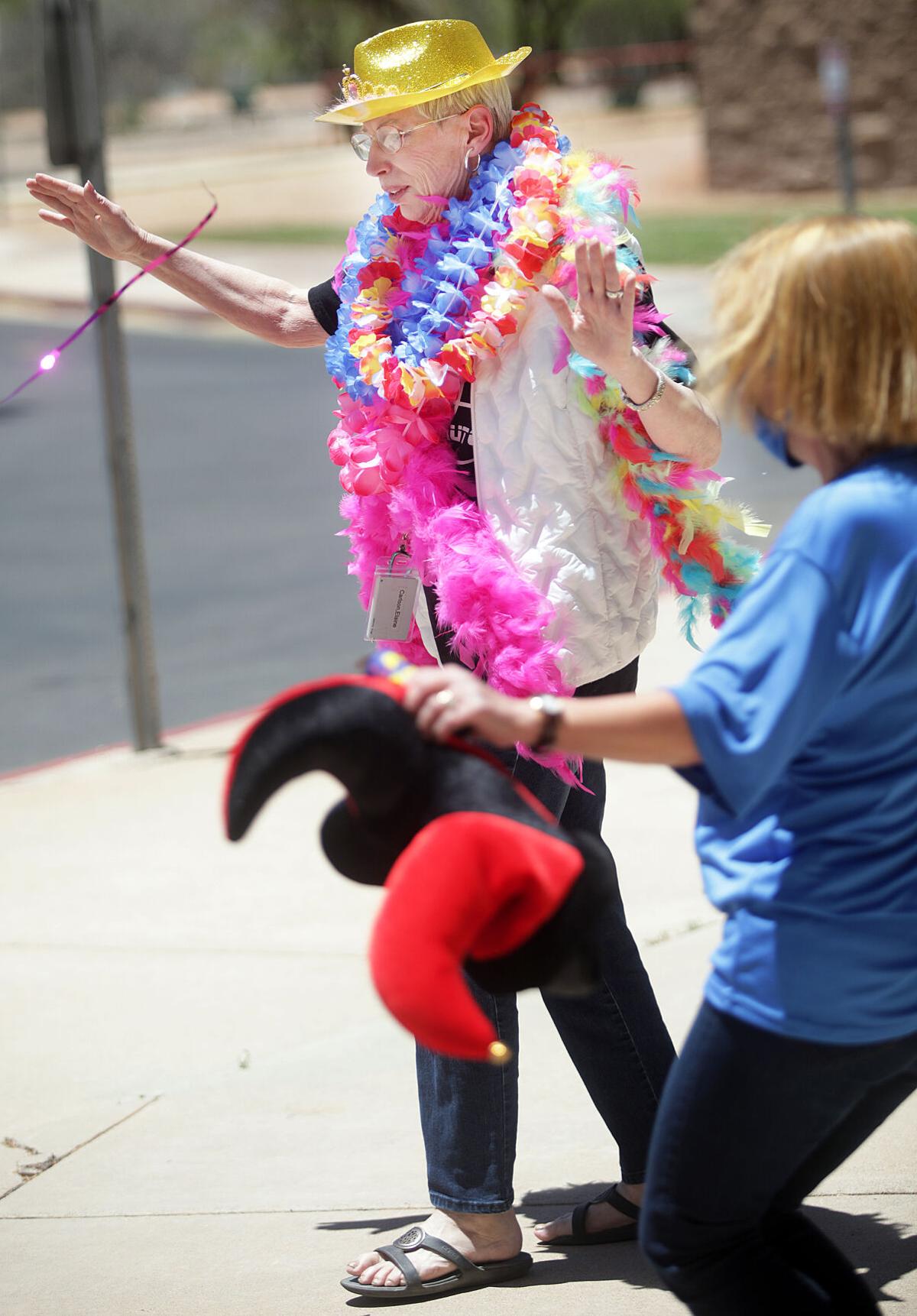 Carlson moves toward a special-made throne for her to wave to well-wishers as they pass by. 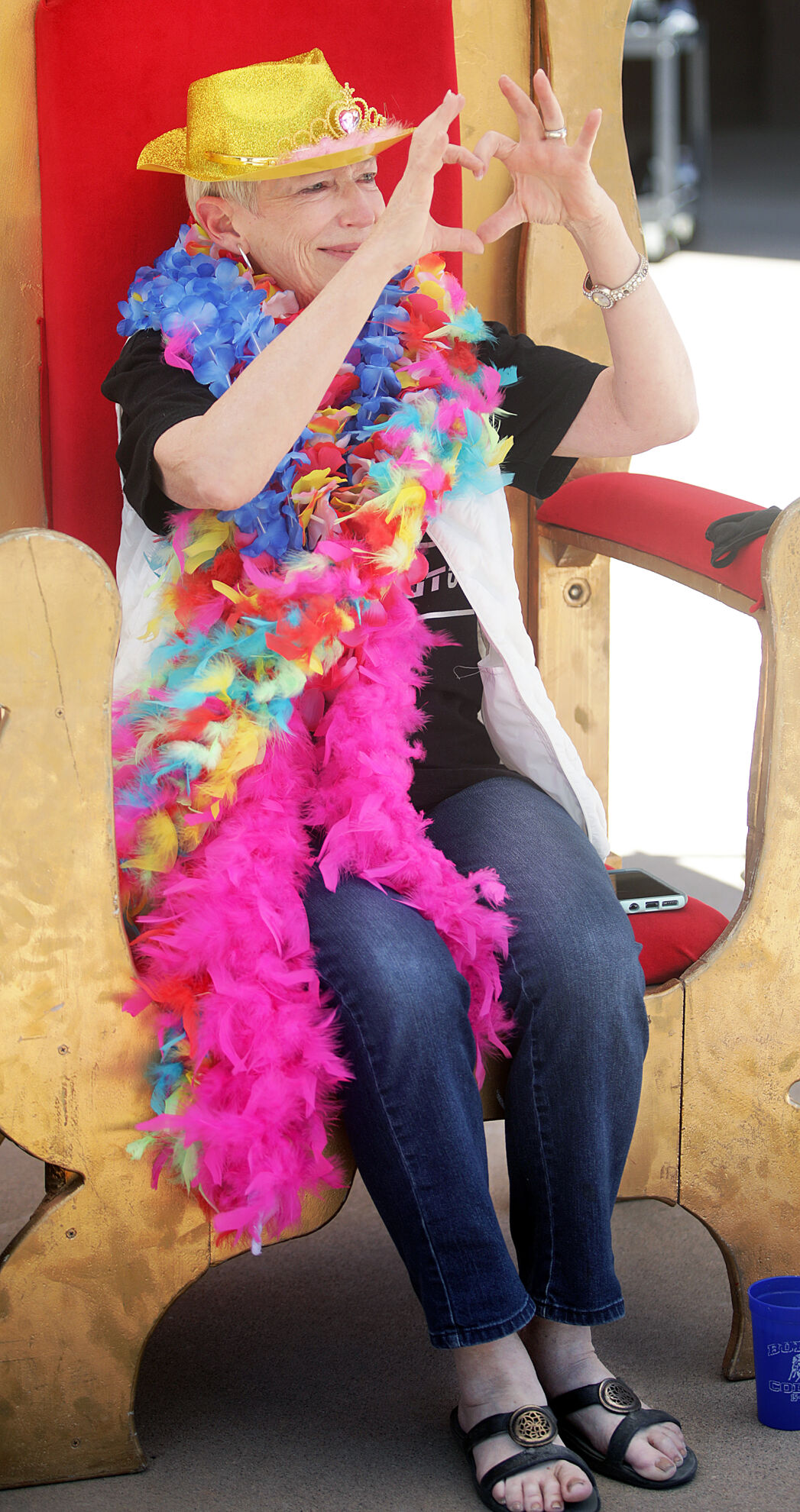 Carlson acknowledges one of the many vehicles honking as it passes by. 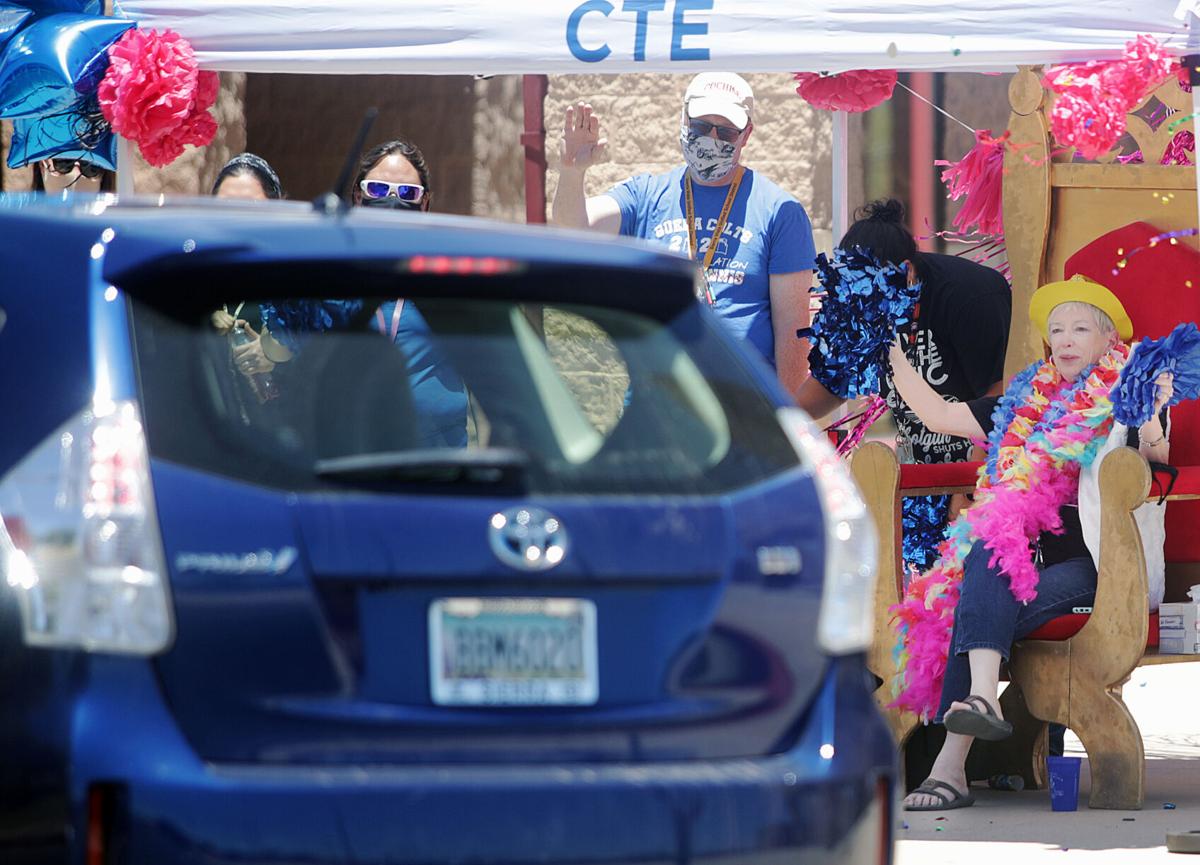 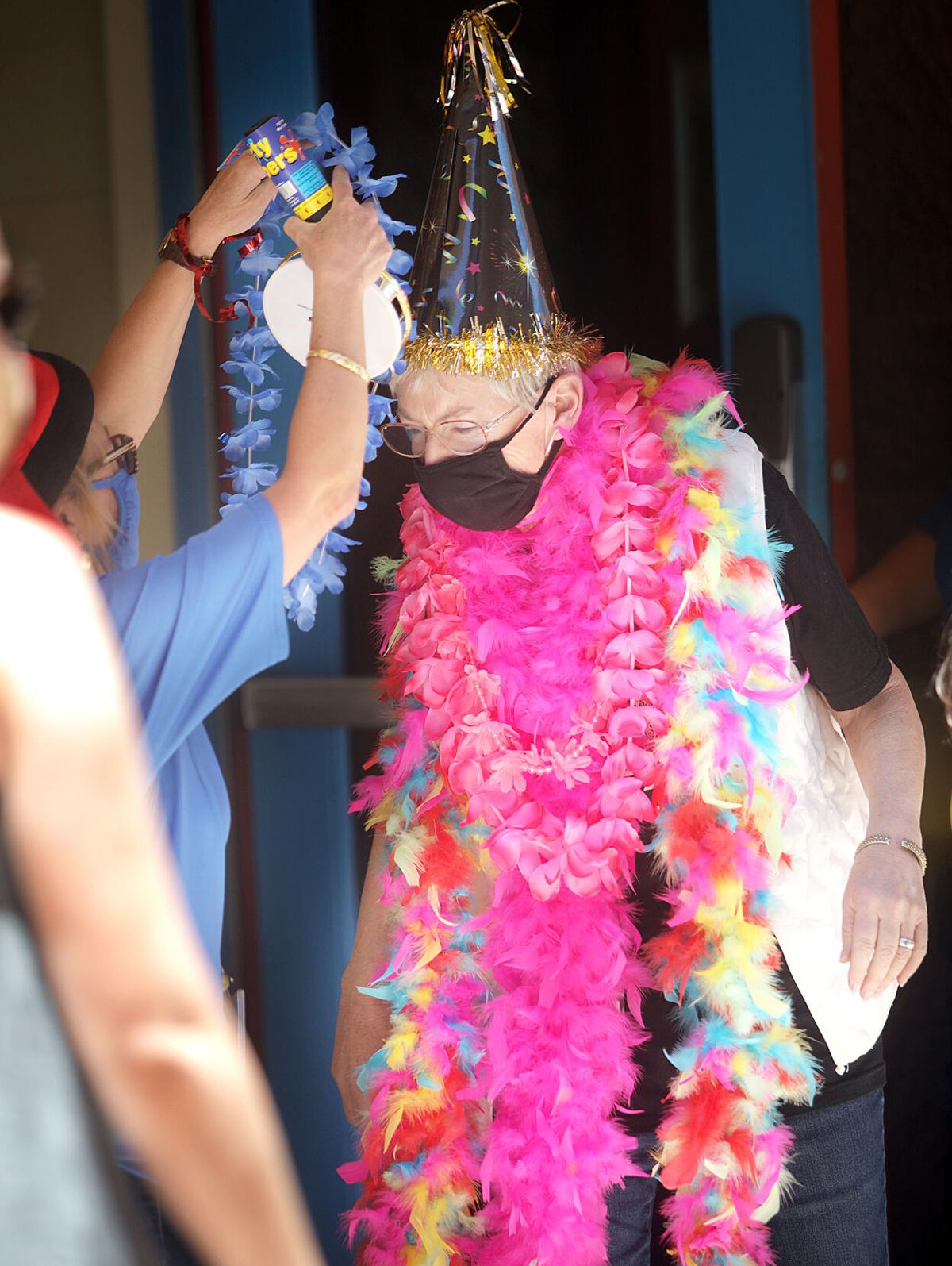 Carlson is ladened with leis at her retirement fling. 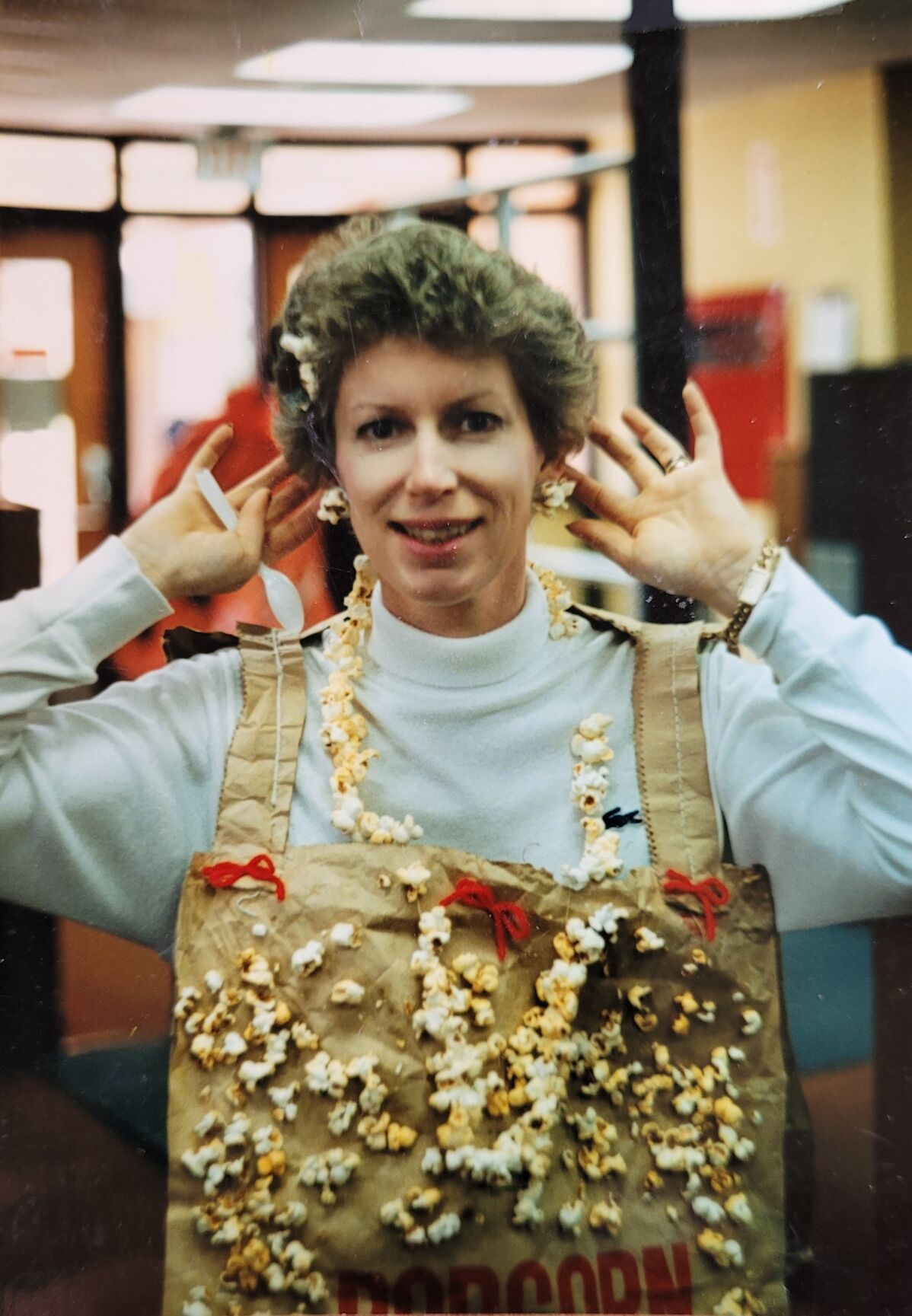 Carlson dressed up as a popcorn bag for Halloween in 1998.

Buena High School’s longtime employee, Elaine Carlson, wipes away tears of joy during her surprise drive-through retirement party in front of the school.

Retiring Buena High School counselor Elaine Carlson is in for a surprise as she is coaxed from the building on May 28.

Carlson moves toward a special-made throne for her to wave to well-wishers as they pass by.

Carlson acknowledges one of the many vehicles honking as it passes by.

Carlson is ladened with leis at her retirement fling.

Carlson dressed up as a popcorn bag for Halloween in 1998.

SIERRA VISTA — “The heart of our school.”

That pretty much sums up the feelings toward Elaine Carlson, who has retired after a 36-year career as an educator, administrator and counselor in the Sierra Vista Unified School District.

“Buena is an excellent high school and the culture of the community is a good place to work,” said Carlson, reflecting on her career. “It’s fun to see the students find their particular path of success. And if the students struggled, (being) the guide to help them move forward.”

“She is the heart of our school,” said Buena High School interim Principal Nicole Young. “She knows the ins and outs of Buena as well as how to be supportive and caring for both students and teachers. We cannot thank her enough for the time and support she has given to so many. We call her ‘Mother Sunshine’ and that is exactly what she represents.”

Carlson and her husband, Chuck Carlson, a pastor at the Sierra Vista Community Church, moved to Sierra Vista in the fall of 1985. Elaine Carlson taught psychology and human behavior at Buena until 1992.

“I’ve always enjoyed what makes people tick, and how to help them make the next right step,” said Carlson.

In 1993, Carlson was promoted to assistant principal at Buena.

“It was a blessing to be able to talk to kids to help them realize how they messed up, and how they can do better so they can be on the positive side and not the negative,” said Carlson. “One of the things I’ve enjoyed about being assistant principal is helping to train teachers.”

Carlson said she emphasized to her staff the importance of making the classroom inviting and welcoming. She also encouraged teachers to take the time to get to know each student.

For Carlson, this included lots of chocolate, costumes and birthday celebrations.

On students’ birthdays, Carlson said she would make them a “Happy Birthday Waldo,” sign and let them pick out a homemade chocolate lollipop from her office lollipop tree. “Waldo” was Carlson’s nickname for students.

The birthday festivities didn’t stop there: Carlson also celebrated her colleagues’ birthdays with a barrage of spontaneous singing at their office or classroom.

“We would knock on the door as the ‘birthday police’ and make a fuss about them and invite the class to sing along,” said Carlson.

For spirit days and Halloween, Carlson and her colleagues dressed up in a wide variety of costumes. Most notable for Carlson was her “bag of popcorn” costume for spirit day in 1998.

In addition, Carlson gifted her homemade chocolates, ranging in shapes from cowboy boots and crocodiles to heart-shaped boxes.

Carlson said she learned the craft at a chocolate-making demo at a Chicago branch of Mothers of Preschoolers, an international Christian organization focused on supporting mothers of young children.

Since then, Carlson has made a variety of chocolates and gifted them to students, colleagues, family and friends. Carlson was particularly revered for her chocolate peanut butter balls.

In 2008, Carlson was set to retire, but chose to return to Buena as a counselor because she felt it was too soon to leave the profession.

In addition to her responsibilities at the high school, Carlson extended her wisdom to the community through her “Ask Mrs. C” column in the Herald/Review, which anonymously addressed parents’ concerns about their children.

Running in the paper from 2008-19, Carlson said she started the column to promote the high school. Each student was referred to in the column as “Waldo.”

Carlson said she would have parents ask for advice in a wide range of topics, including school dress codes, eating in the classroom, shorter school days and grades.

Carlson retired on May 28 after more than 30 years in the education field. She was unaware of the surprise that awaited her that Friday afternoon.

Buena High School Assistant Principal Wesley Wood organized a drive-through retirement party for Carlson at the school, aiming to shower her with gratitude.

Carlson said the surprise began when she was called into a last-minute counselor meeting by lead counselor Angela Sedore. She was then escorted outside to be greeted by a parade of colleagues, students and their families who drove around the bus stop pullout with decorated signs and affectionate cheers.

“It felt like a ‘thank you’ would never be enough,” said Wood. “(It was) all word of mouth ... I just want to show her how much she is appreciated. It’s a lifetime of her work and I want to recognize that.”

Wood said the event was in a drive-through format to accommodate the district’s COVID-19 mitigation policies.

“She is someone you could call for help, seek advice, be a shoulder to lean on or cry on,” said Young. “We are thankful to her for so many things (that) have happened behind the scenes that she helps with.”

Wood and Young expressed deep appreciation for all Carlson has done for the community and the lives she’s touched.

“Thank you, Mrs. Carlson, for everything,” said Young. “Your legacy is etched in our building and will live on because of those you have had a tremendous impact on as a teacher, administrator, counselor, and more importantly, the biggest cheerleader for our school. Enjoy retirement, but feel free to drop by peanut butter balls once in a while.”

“People like her stick with you throughout the years,” said Wood. “We all know her and because of how strong she has been, and how much we mean to her ... The people who’ve gone through her office mean a lot to her. It won’t be the same without her, since she’s been a fixture here since ‘85. I’ll miss her everyday. The generosity of her time. Service is important to her, service to the community.”