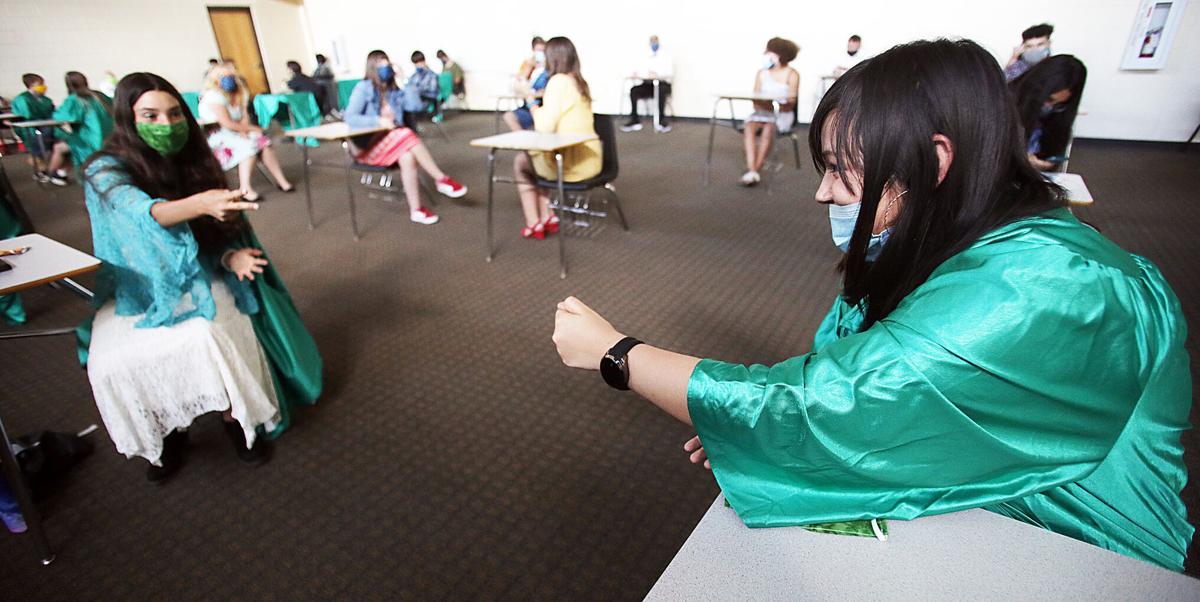 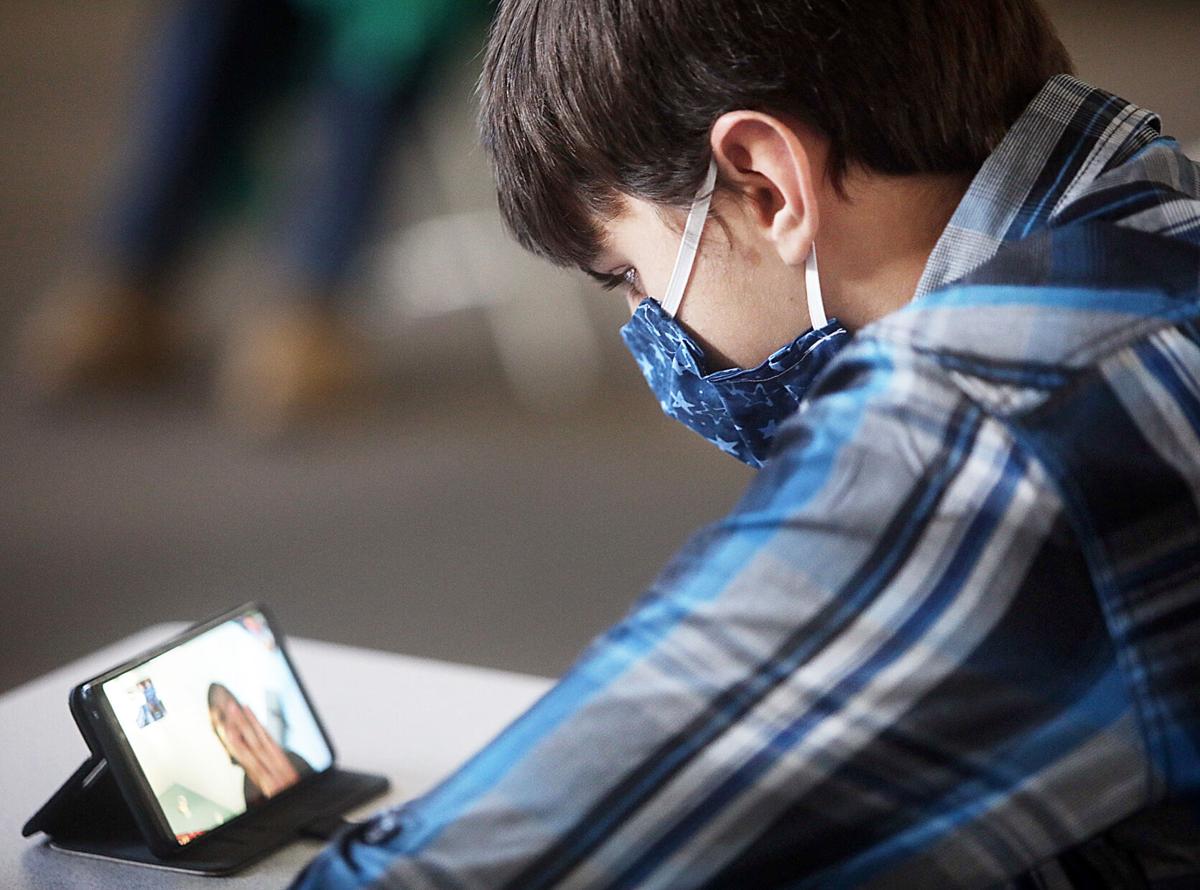 Eighth-grade student Jacob Twilley interacts with a friend from a different school, who isn’t having a promotion ceremony, and will be keeping his device on while sharing during Wednesday’s ceremony in Tombstone. 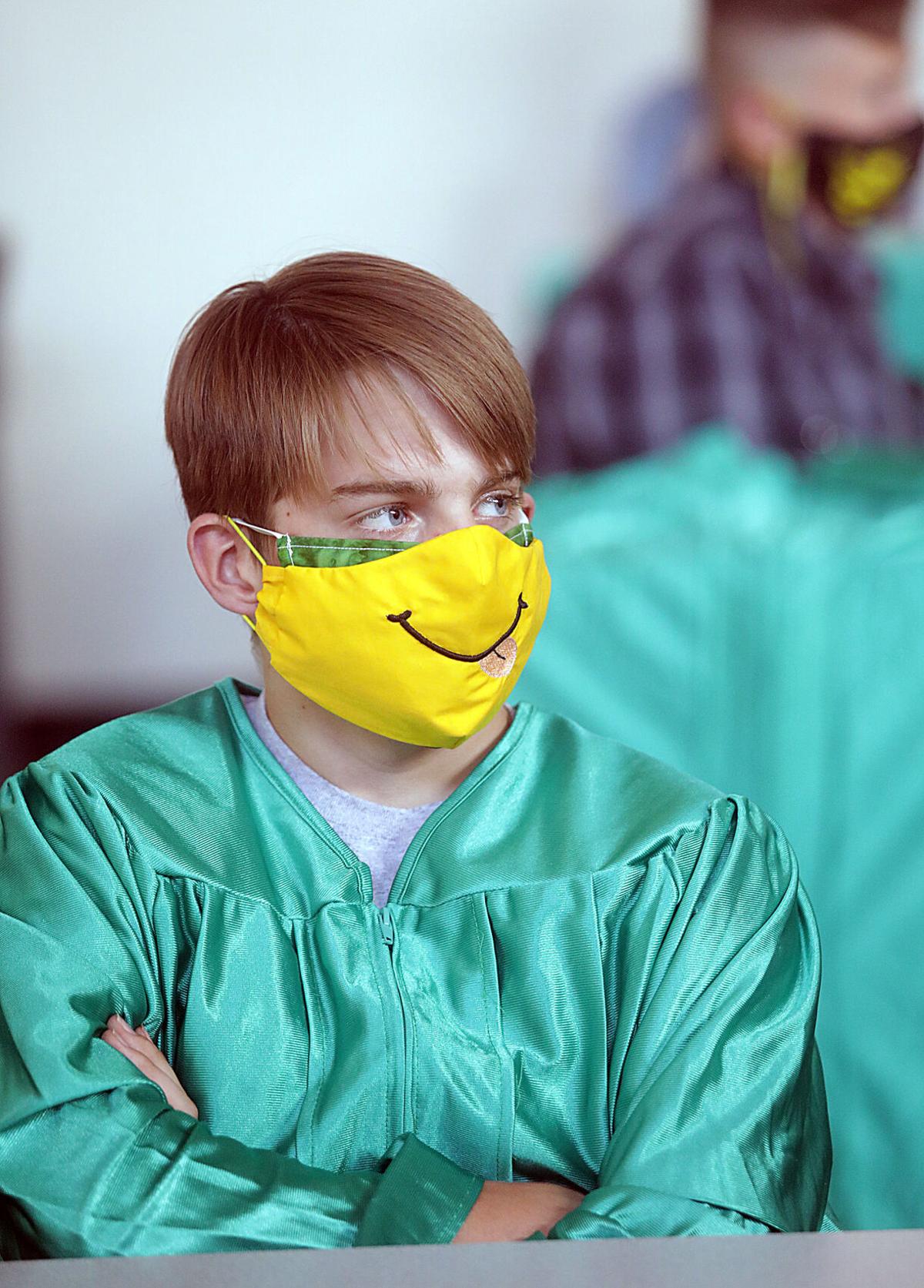 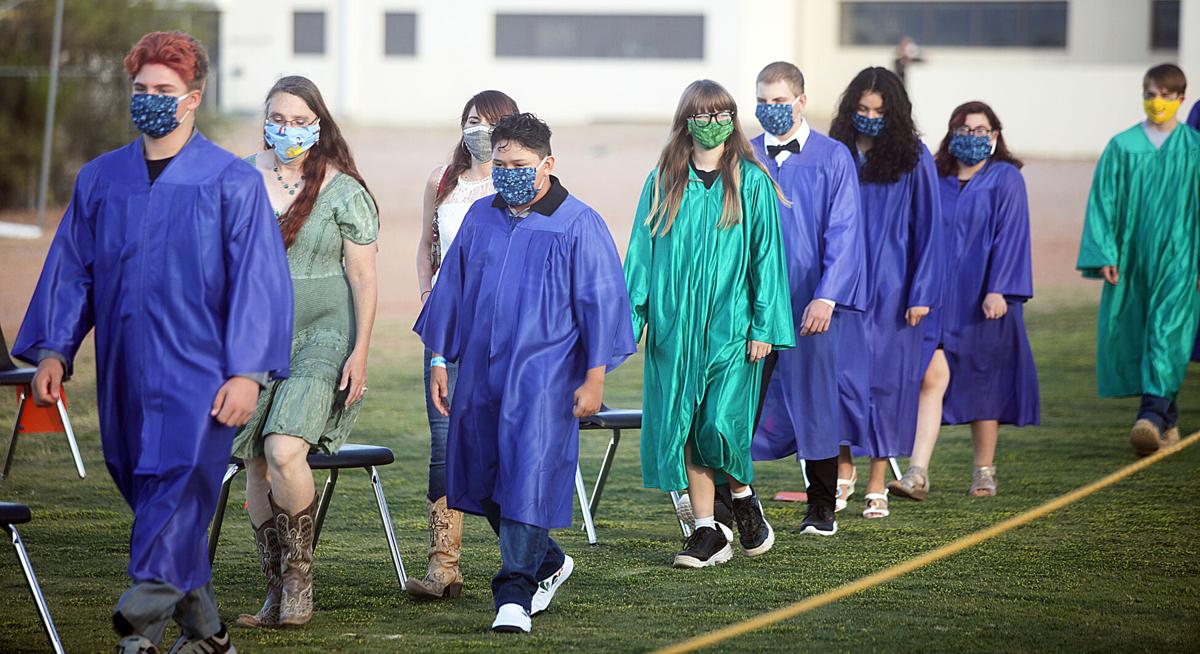 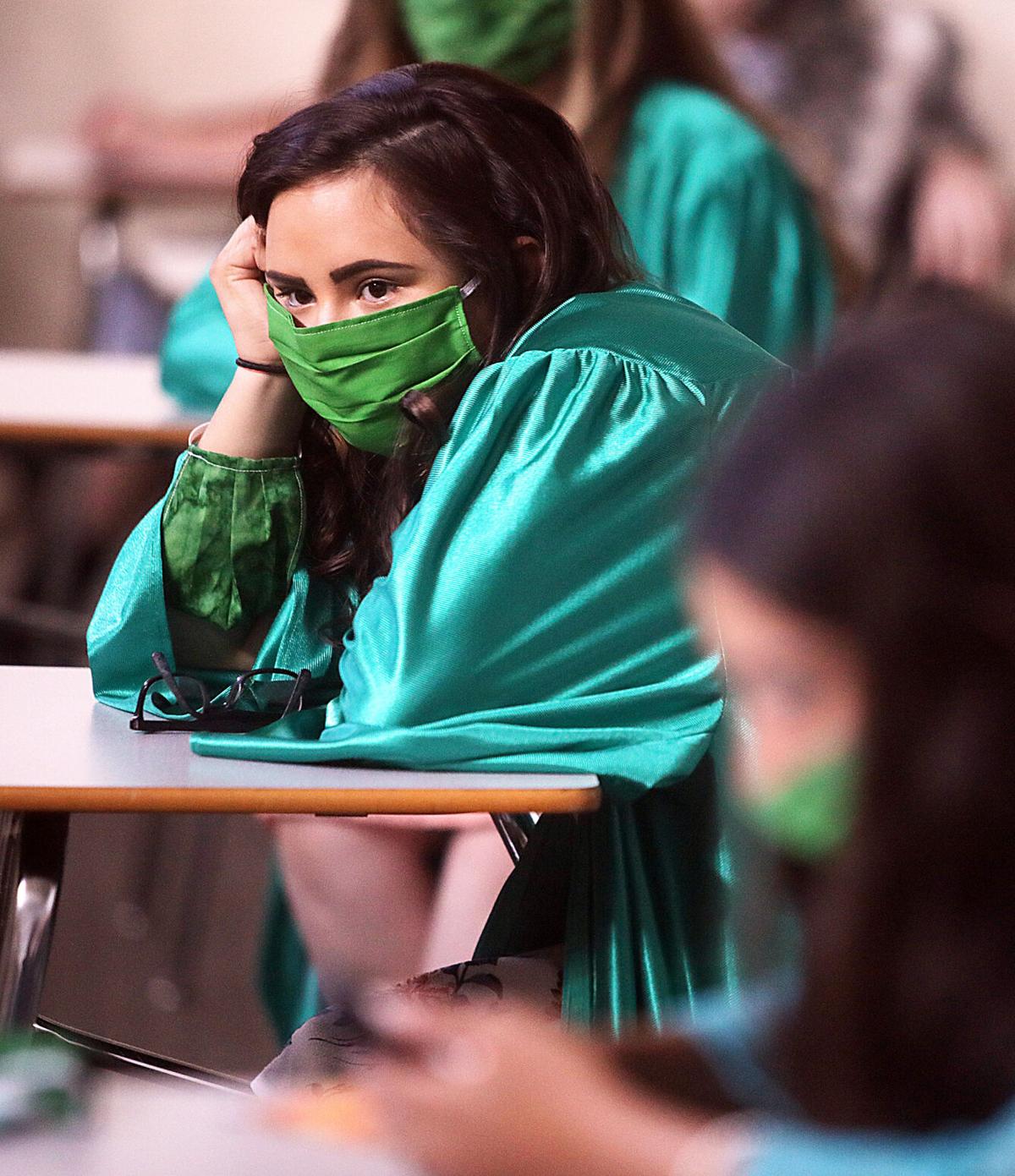 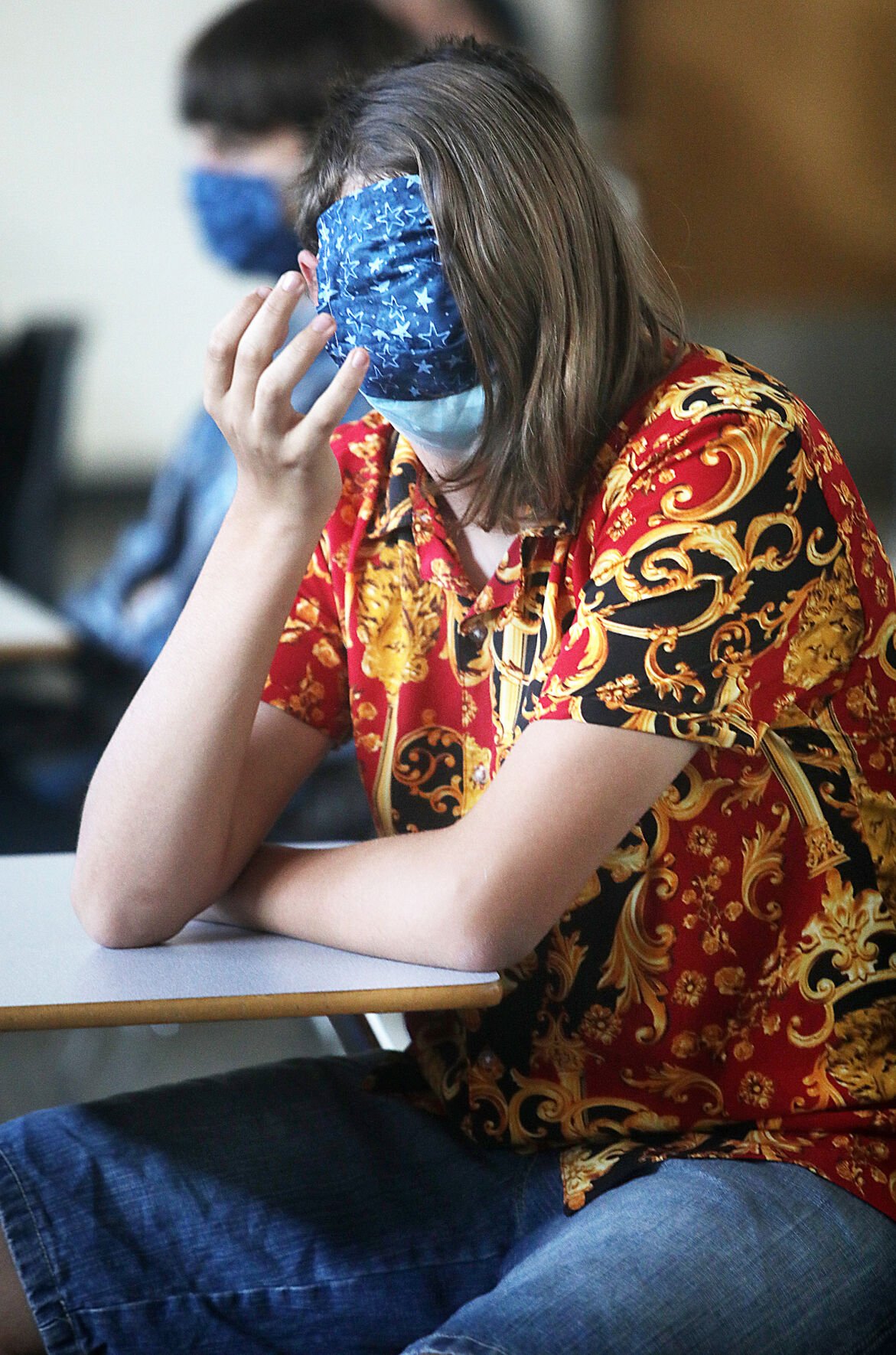 Eighth-grade student Jacob Twilley interacts with a friend from a different school, who isn’t having a promotion ceremony, and will be keeping his device on while sharing during Wednesday’s ceremony in Tombstone.

Most schools across the state turned to drive-through and virtual ceremonies for their promotion and commencement programs this year, but Tombstone School District held out for “as traditional a program as possible,” while following specific guidelines handed down from the state. The Huachuca City School valedictorian was Javier Lopez and the salutatorian was Isaiah Noonan, while the Walter J. Meyer valedictorian was Liam Cormany and the salutatorian was Maleigha Weihrauch.

“This is a very different graduation from what we were expecting, but I think our school did their best to make it a traditional one for us,” Walter J. Meyer student Josh Winberg said through his green mask. “We keep hearing that the classes of 2020 will go down in history because of this.”

“It was disappointing that we were not able to have a traditional graduation, I think everyone did a really good job with this, and I appreciate it,” he said. “It’s fun to see my classmates again after the long school closure, even with the face masks.”

Jacob Twilley included his friend and former classmate in the graduation through his cell phone.

“Rylee used to be in our class at Huachuca City School, but she moved to Arkansas last year, so I’m going to let her hear our ceremony through my phone,” Twilley said. “She has a lot of friends from Huachuca City School that are being promoted today.”

“Being able to have a ceremony with the class walking onto the field to ‘Pomp and Circumstance’ is a big moment for the students, and I’m glad we’re one of the few schools that made the effort to hold a ‘somewhat traditional’ promotion,” said Rebecca Robinson, THS band, choir and career and technical education director.

“I love it,” he said of the ceremony. “I think it’s fantastic. It took a lot of guts and preparation to follow the strict guidelines to do this. None of the other schools that I know of did this, and I’m happy to see that Tombstone decided to go through with it.”

While everyone was required to wear masks, as each eighth-grader walked up onto the stage individually to be recognized, the student was allowed to remove the mask briefly for a quick photo.

Huachuca City School Principal Kevin Beaman opened the promotion with an address to the crowd.He spoke of the challenges that COVID-19 created for the students and praised them for their accomplishments.

“I am not telling you anything you don’t already know when I say the past few months have been anything but routine and business as usual,” he said. “We left school for spring break in March, so ready for a week off to recuperate and had every expectation to come back after the week rejuvenated and ready to finish the school year.”

But the COVID-19 pandemic caused school closures across the country, forcing students to finish the school year through distance learning.

“We are here today to recognize your accomplishments … as we step into this new world called high school,” Beaman said. “I hope in the months ahead, all restrictions are lifted and as we see each other, we are able to give the congratulatory hugs and handshakes that have been missed,” he said.

Both valedictorians touched on the unique circumstances that led to school closures.

“This may be a weird graduation because of what is going on, but we are still having a graduation,” said Cormany. “This year has been tough and we even had to do online schooling. But we still got our chance to graduate and had an amazing time this year.”

Lopez said that “although the last quarter of school turned out to be a curveball,” he is proud of how his classmates handled it.

“Look around,” he said. “We are having an actual promotion this year, considering the circumstances.”

Those words resonated throughout the ceremony, with parents expressing their gratitude for the school district’s decision to hold a traditional ceremony.

“I thought the ceremony was very nice — really enjoyable,” said Terrence Barnes, who was there in support of William Boykin. “I’m glad the school district made the effort to do this.”

Lisa Frohne said the ceremony showed a lot of effort on the school district’s part.

“I liked everything about it,” she said. “The kids did really great, especially for not having any practices.”

Frohne also noted that the ceremony gave the students closure, as their school year ended abruptly because of COVID.

“Even with the face masks, I thought this was a very nice promotion,” said Pam Anderson, whose grandson, Tod Anderson, was one of the students being promoted. “You can take a look around and see the work that went into this, and I think the school has done a really nice job with a challenging situation.”