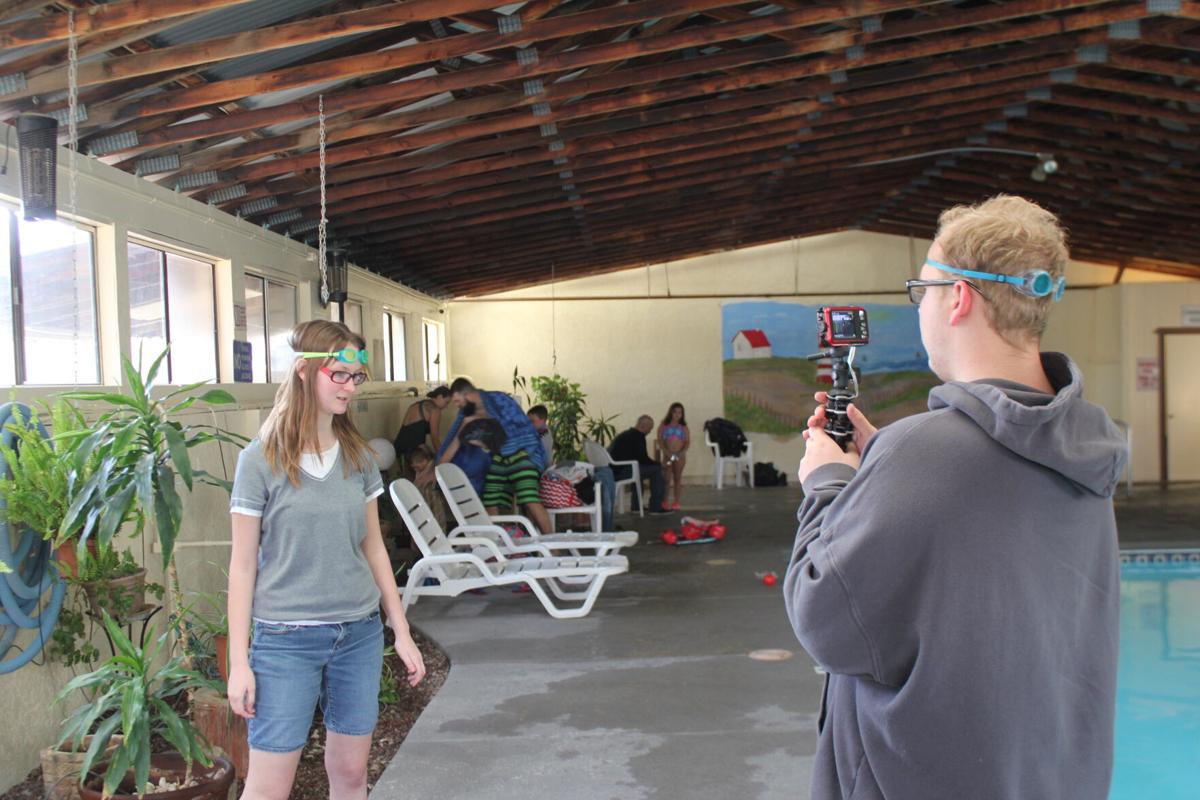 Nicole Lease, 15, and Kodi Anderson, 15, work on their entry for the Sierra Vista 48-hour Film Festival. 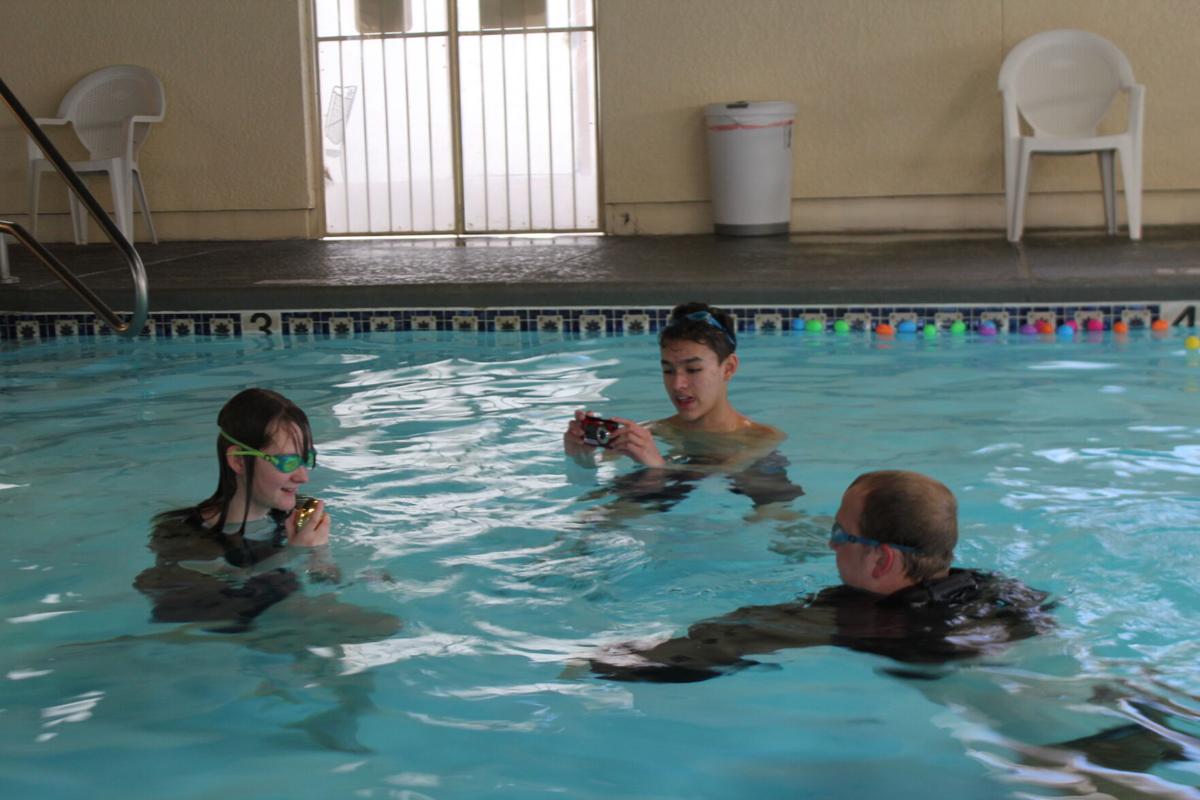 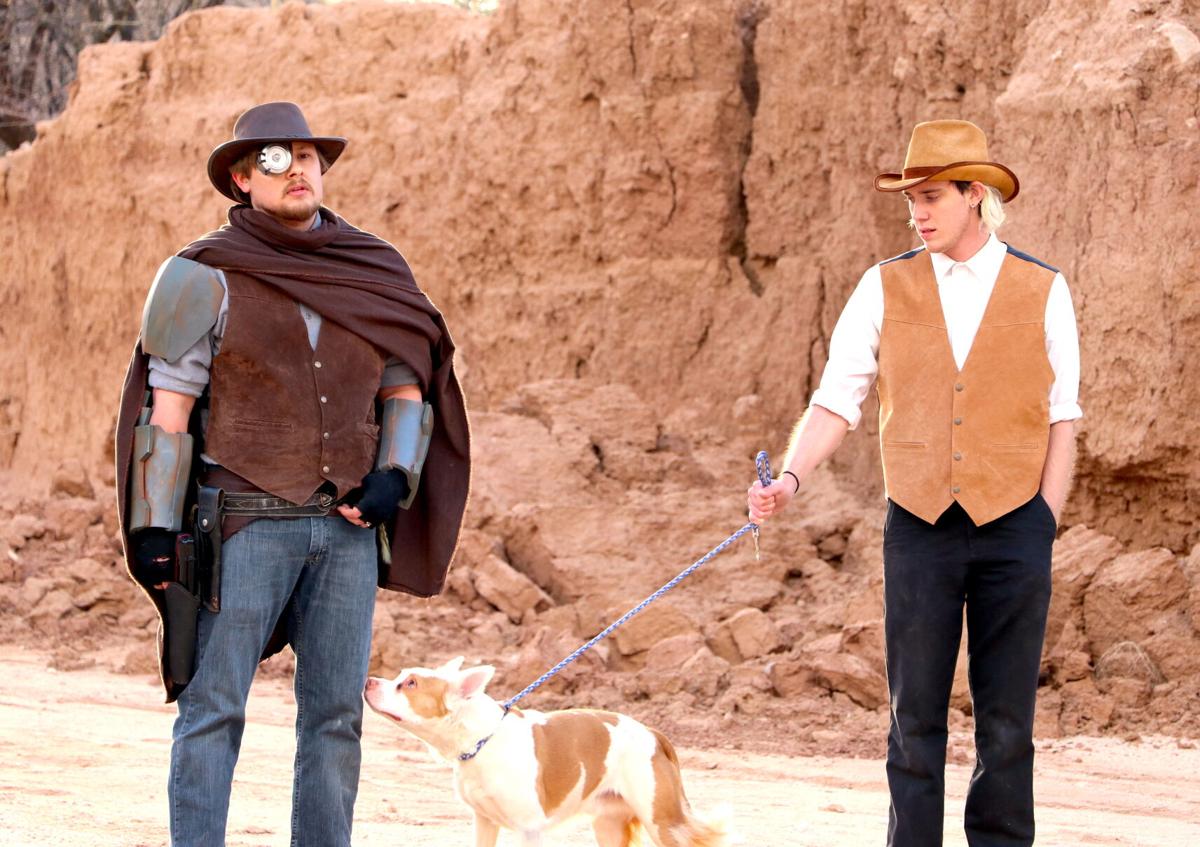 Late Saturday afternoon, with a little more than 24 hours left in the 48-hour competition, John VanHook, Matt Hammer and Gizmo the dog prepare for the ending scene of  "The Rider." 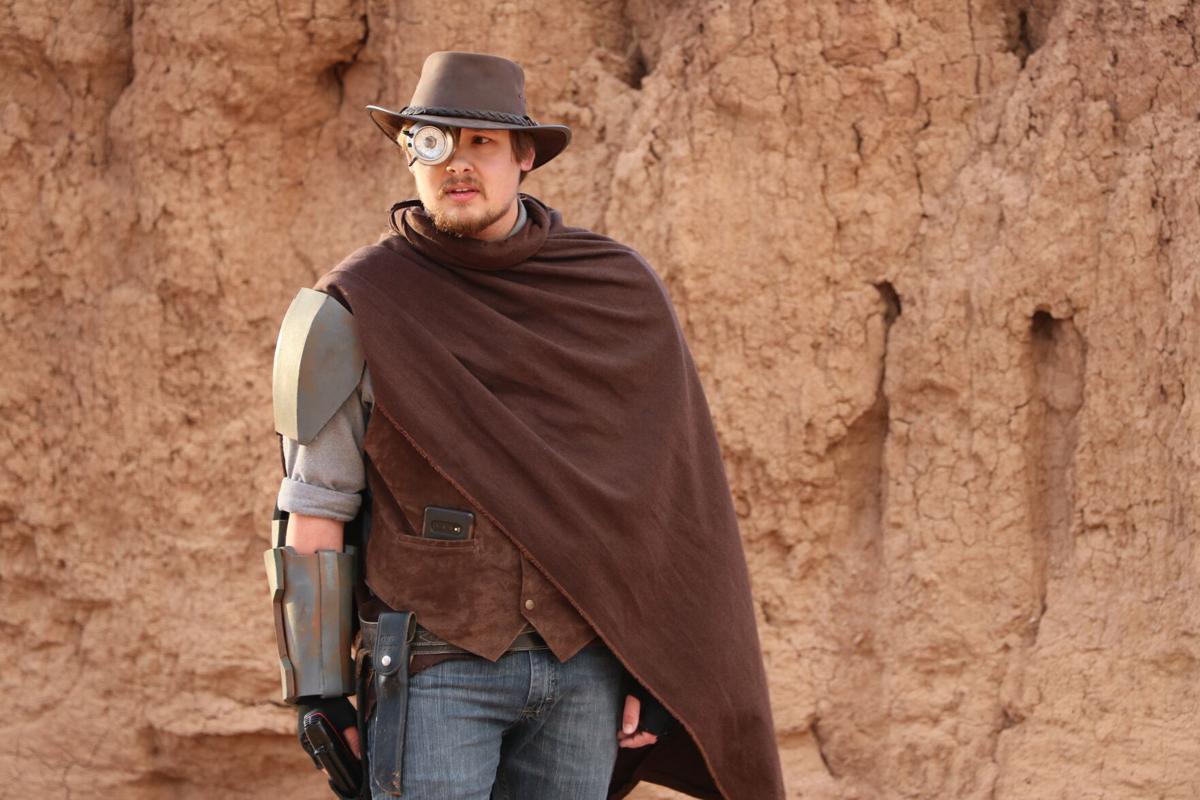 Director John VanHook on set of the film "The Rider." 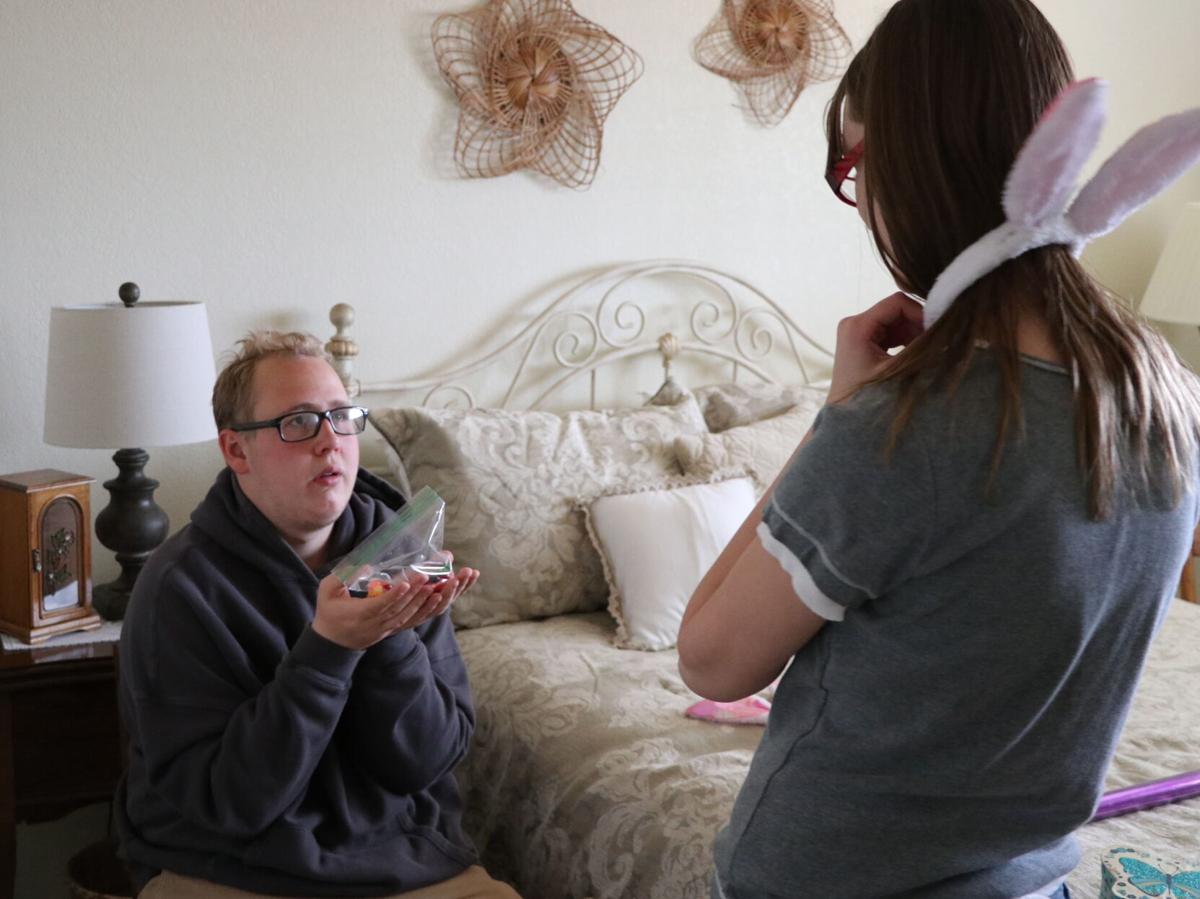 Kodi Anderson and director Nicole Lease go over lines for a scene for their film "The Box Thief." 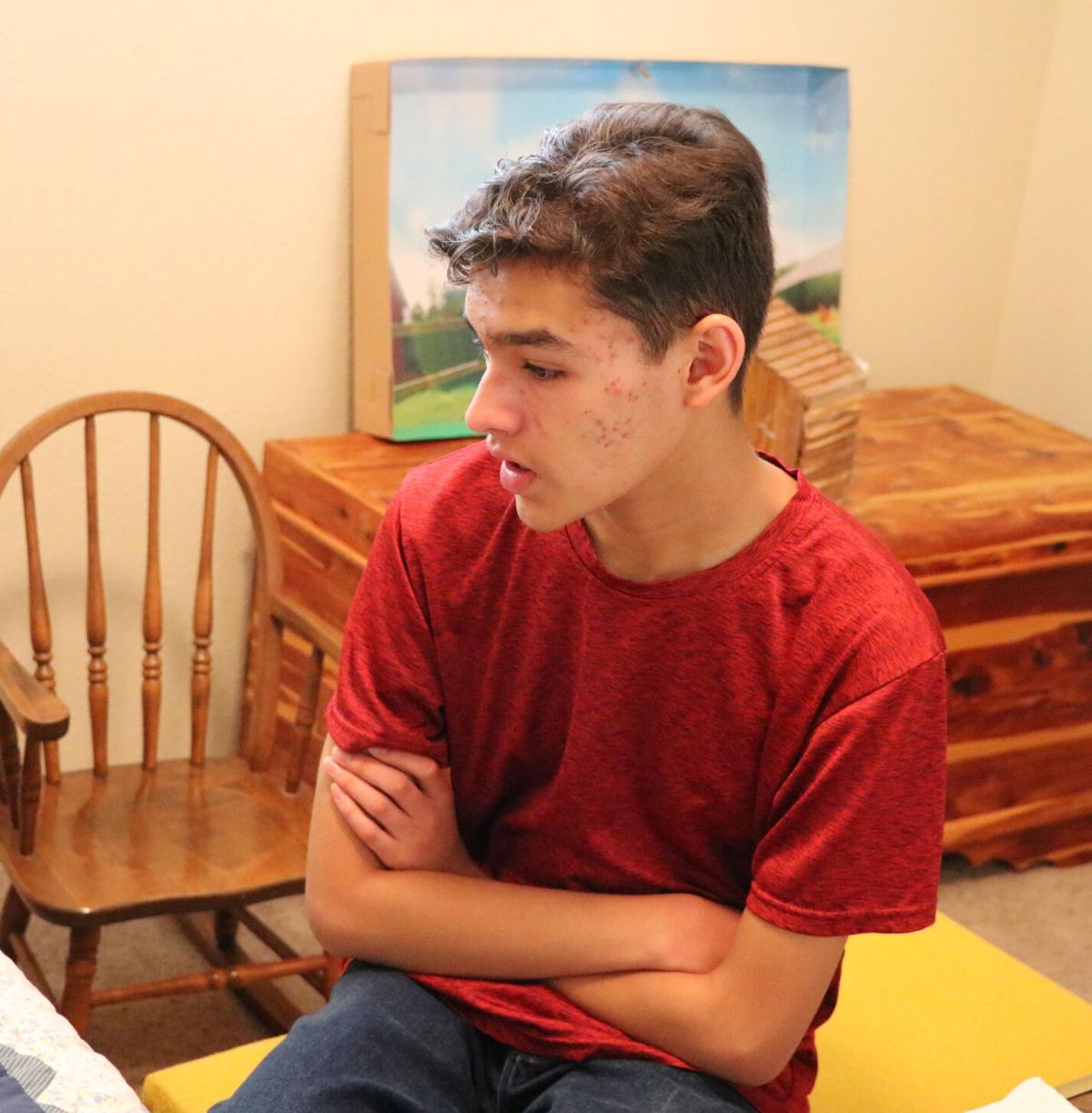 Collin Pregler on the set of "The Box Thief." Pregler is proud of the film he made with his teammates. 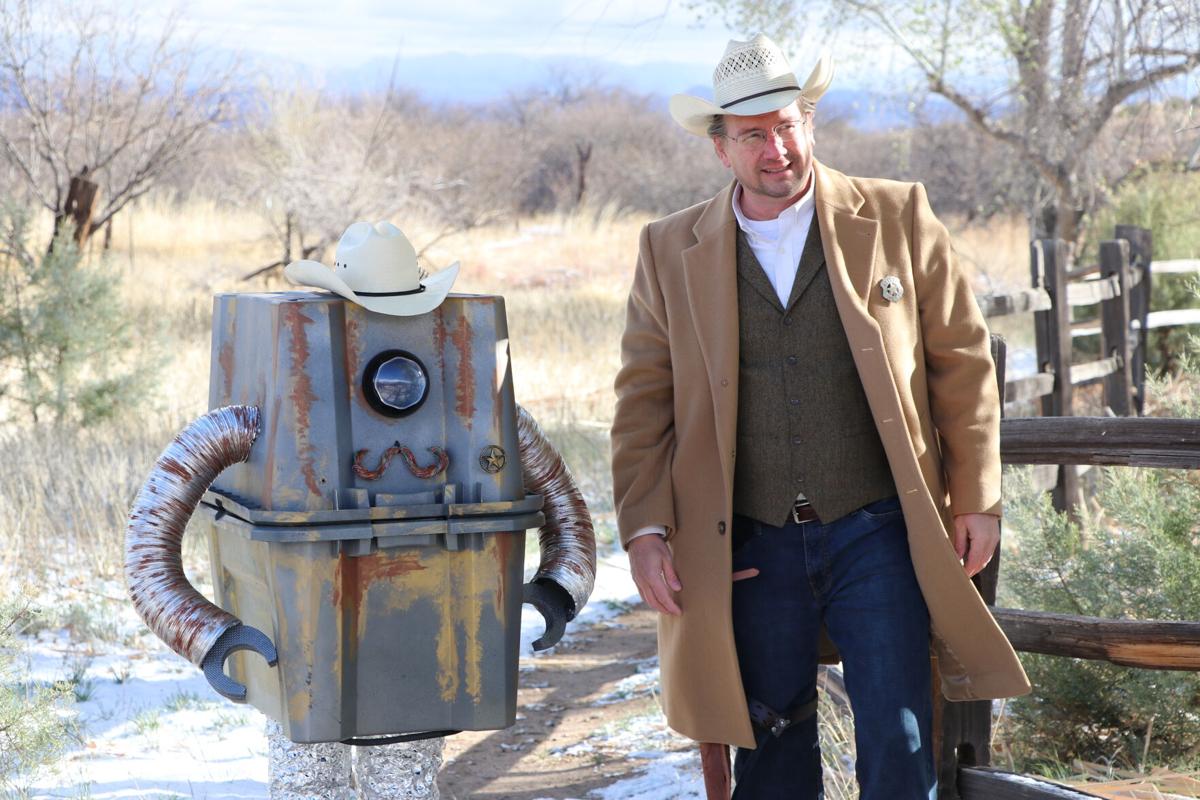 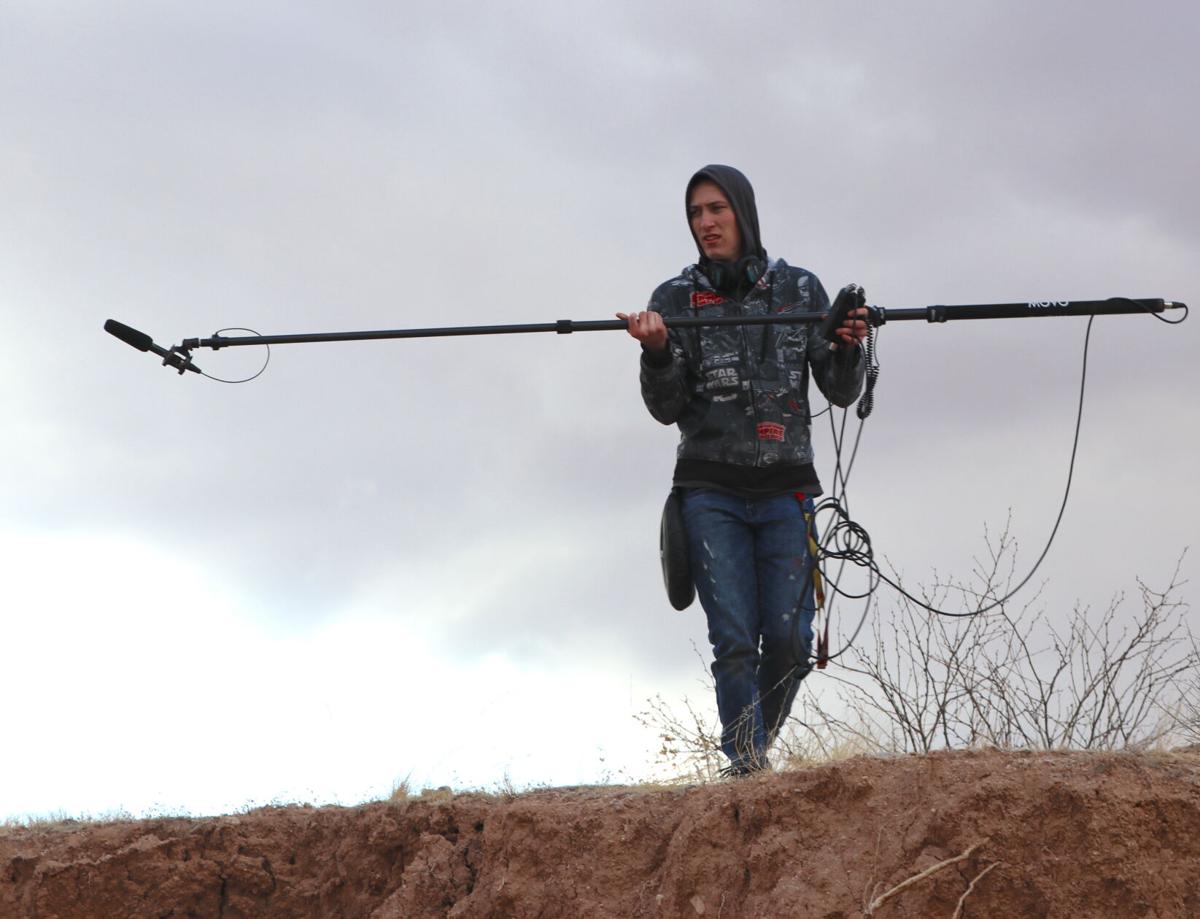 Dillon Cox preps a boom mic on the set of "Rider."

Nicole Lease, 15, and Kodi Anderson, 15, work on their entry for the Sierra Vista 48-hour Film Festival.

Late Saturday afternoon, with a little more than 24 hours left in the 48-hour competition, John VanHook, Matt Hammer and Gizmo the dog prepare for the ending scene of  "The Rider."

Director John VanHook on set of the film "The Rider."

Kodi Anderson and director Nicole Lease go over lines for a scene for their film "The Box Thief."

Collin Pregler on the set of "The Box Thief." Pregler is proud of the film he made with his teammates.

Dillon Cox preps a boom mic on the set of "Rider."

After 48 hours of scripting, filming and editing — the time limit on the entries — “Leigh D’s” was named runner-up for Best Film and the Best Actor awards in the Open Division, as well as taking the overall Audience Choice award in the third annual Sierra Vista 48-hour Film Festival.

Stephanie Deleon, 21, and her brother, Chase Deleon, 16, who directed and edited the film, expressed gratitude upon taking home three awards.

“We just wanted to make a film that we’re proud of, and I’m so happy about what we’ve accomplished,” said Stephanie. “We really felt the spark of the idea and we just got more and more excited with each production stage that went past, so by the time we were in the editing room it was just such a euphoric experience to come up with something like this.”

She said the inspiration for the story, two sisters conspiring to win a beauty pageant, comes from her experience in the pageant community.

“I reached out to some of my closest pageant sisters and they were wonderful and so fun to work with on set, and they made for a really great film,” she said.

Alyssa Alcala, who won the Best Actor award in the Open Division as a part of Deleon’s team, said her favorite scene to film was when her character confronts her sister about cheating in the beauty pageant.

“It’s like really funny, too,” said Alcala. “We were trying to hold in our laughs.”

Buena High School film instructor and co-director of the event, Timothy Ingold, said teams had to include a character named Jennifer, who’s “the winner,” gift wrapping paper as the prop and the line, “Hey. Who turned out the lights?” in their final feature films.

“To some degree, its pretty open-ended,” said Ingold. “Making a movie is such a hard thing to do, and having to turn it in within 48 hours is an incredible feat. There’s lots of students who get excited about doing this. It’s a tedious process. When you are giving such a short amount of time, you’re kinda forced to create what you want to make.”

In the Student Division, The Hydrate Team, including Nicole Lease, 15, Collin Pregler, 16, and Kodi Anderson, 15, took the Best Film award for “The Box Thief.”

“I just can’t believe that we actually won something,” said Lease, the team’s director.

“This one was really fun to do,” said Anderson. “We improvised some of the scenes and added some things. Overall, I though it was really good.”

Anderson said one of the challenges the team faced was with audio and filming underwater scenes in an indoor pool.

“We had to fix some things because in the pool, it was echoey and (there was) a lot of people talking loudly,” said Anderson. “So, we had to do some audio and add it in so we could fix that.”

Lease said their film centers around an Easter-themed gift-wrapping contest in which the assigned character, Jennifer, always wins. The climax comes with Jennifer’s competitors attempting to sabotage her seemingly inevitable win.

“A winner usually is someone who wins a competition a lot and how could we include gift wrapping into that and Easter baskets?” said Lease. “Because we have lots of Easter eggs and we have Easter baskets, so we just kinda built it off of that.”

Anderson, Lease, and Pregler said that they plan on returning to compete in the festival next year.

Kyle Johnson, 17, took the Best Actor award in the Student Division as a part of Team Phoenix for his role as “Jennifer the Winner.”

“I was thinking like, ‘you know what would be funny, having gender-swapping roles,’ ”said Johnson. “I mentioned it, and the director immediately liked it. We went with it, we continued it, and we came up with like, some little parodies (with) inspiration from ‘The Office’ and ‘Mean Girls’.”

Teams faced the additional challenges of filming on-location in unpredictable weather over the course of the 48 hours.

“There was some rocks in the road,” said Joshua Lindstrom, 18, cinematographer of team BTE (Better Than Ever).“I mean, it did blizzard where we were filming, so half of the day was gone yesterday, Saturday, which was our most important day. But we pulled through and we ended up getting all our reshoots done on Sunday.”

Lindstrom said while the weather was surprising, it ended up being an asset for his role as the team’s cinematographer.

“It actually wasn’t too bad because I love cloudy weather,” said Lindstrom. “It’s the best to film in, you get this perfect shade, like a diffused light. As a cinematographer, my job was pretty easy, I mean we filmed open fields, we had good colors everywhere we went. It was a breeze.”

Cox said his favorite part of making their film was in the costume and character design.

“That was probably was one of the best parts of being able to create our own world,” said Cox, 19. “I think our idea was very original in the sense that we got to create our own soapbox of a world and play with it how we wanted to, and that was really fun. I’d have to say that was probably above all, designing what we wanted our aliens to look like or what we wanted our robot to look like.”

VanHook, 22, said the main challenge of the festival was integrating the assigned prompts and finishing the film before the deadline.

“The prompts are always the first challenge that you get faced with immediately and it can always kinda be mind-boggling because you’re like, and you look at these things like ‘well, that has absolutely no place in a film of mine. But we’re gonna roll with it,’ ” said VanHook. “Other than that, it’s just weather and timing. It’s always weather and timing when it comes to things like this, especially with the 48-hour film (festival). We wanted to make it very eye-appealing and that added quite the challenge.”

Team BTE was unable to complete its film before the deadline but received an honorable mention in the screening and awards ceremony on Sunday evening.

Owner of the Uptown 3 Theatre and co-director of the festival, Levi Borland, regarded this year’s festival as a success with 10 teams competing. He extended his gratitude to Thunder Mountain Church for providing a space for judges to judge the films, Texas Roadhouse for volunteering to cater the judges’ meals, and Ingold for co-directing the event and fostering filmmaking interest in the community.

“What he’s done is not just create an atmosphere for students and adults alike to become interested and have outlets to challenge themselves, but continuously engage those in the community,” said Borland. “It’s amazing to see the impact its had. Mr. Ingold deserves all of the credit for that. None of this would be possible without Mr. Ingold.