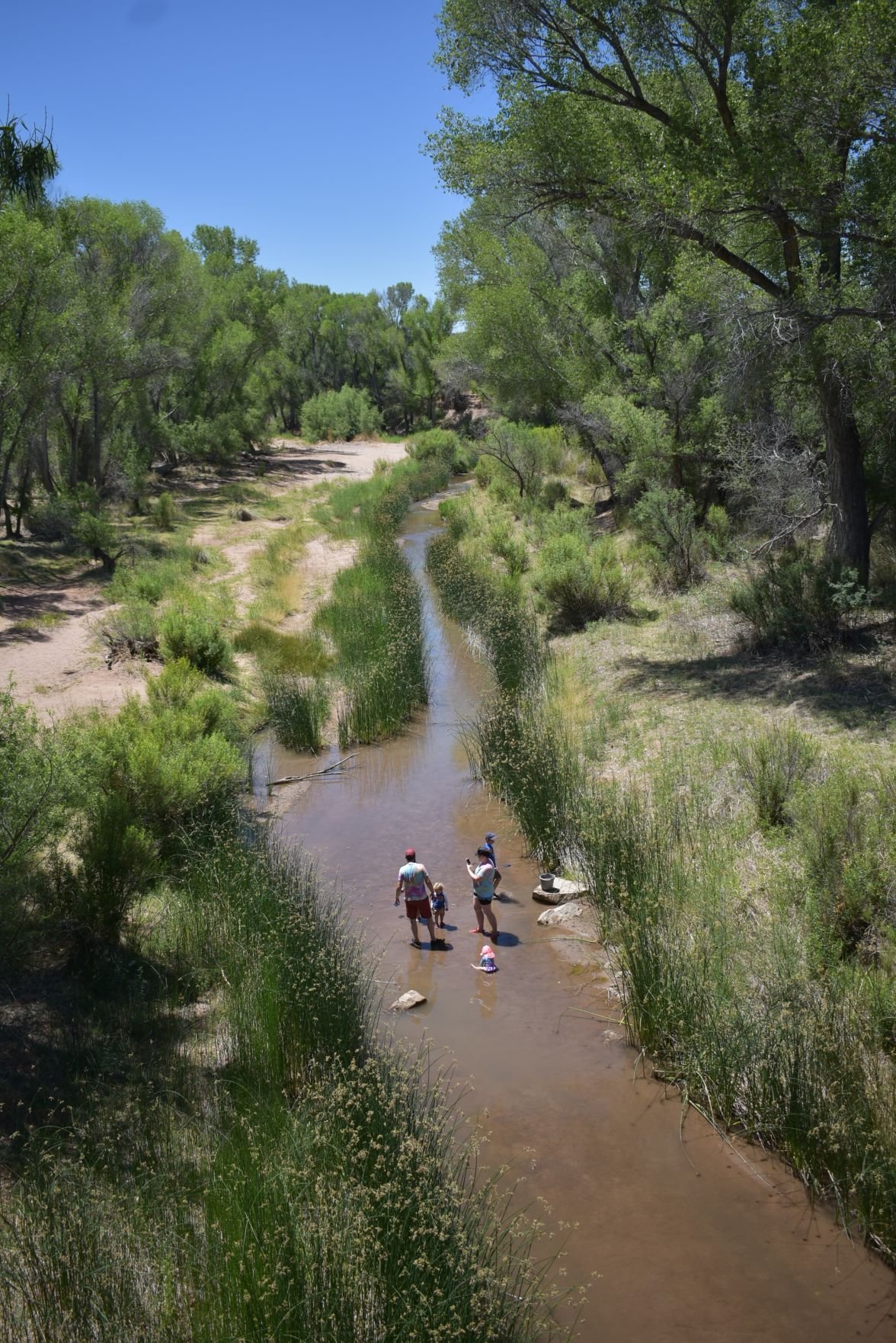 While volunteers walked the San Pedro River to collect data on wet and dry sections, a family played in the slow moving stream near the Charleston bridge last Saturday. 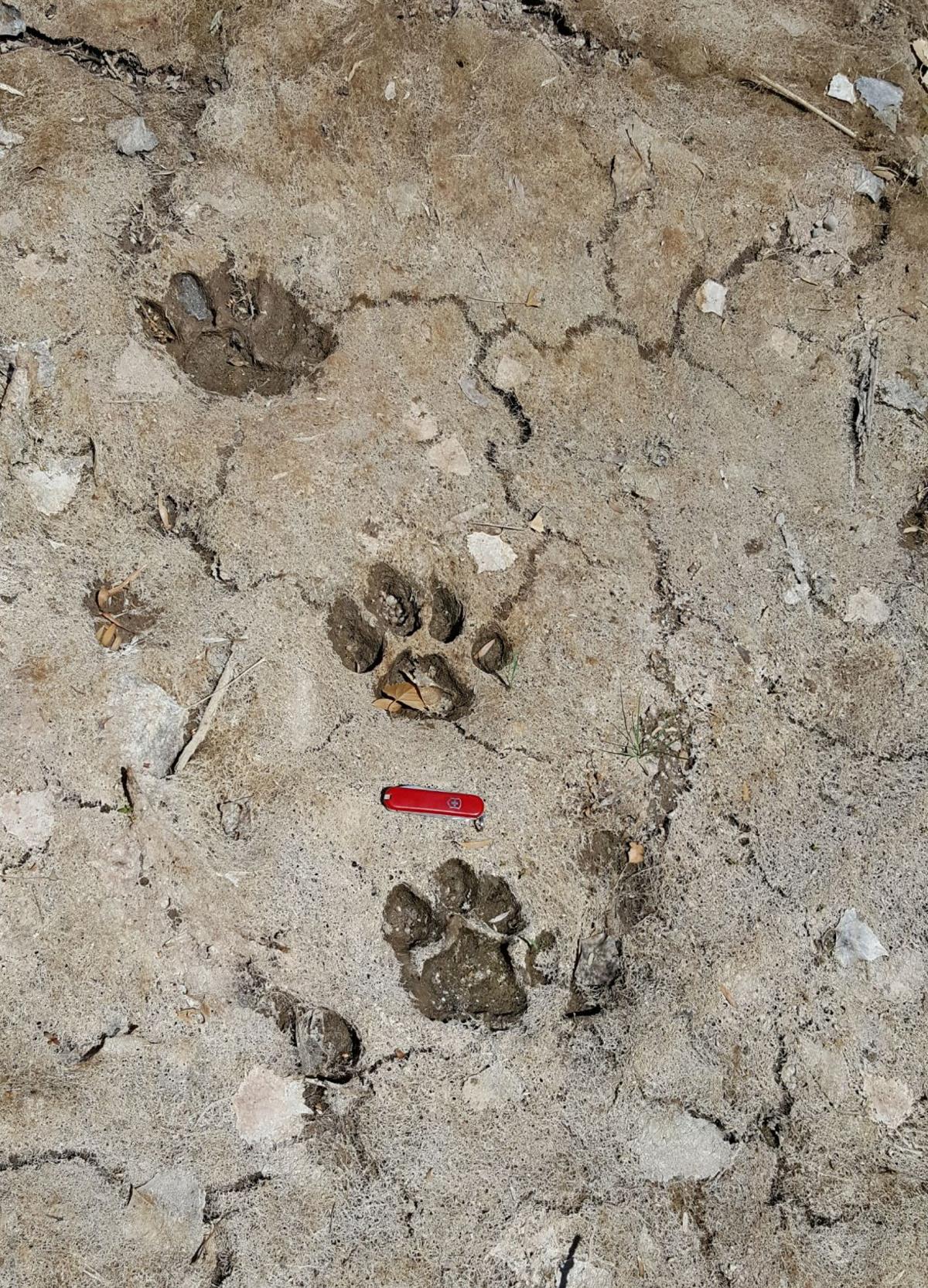 Mountain lion tracks in moist soil along the river were spotted on the wet/dry mapping project last Saturday on the San Pedro River. 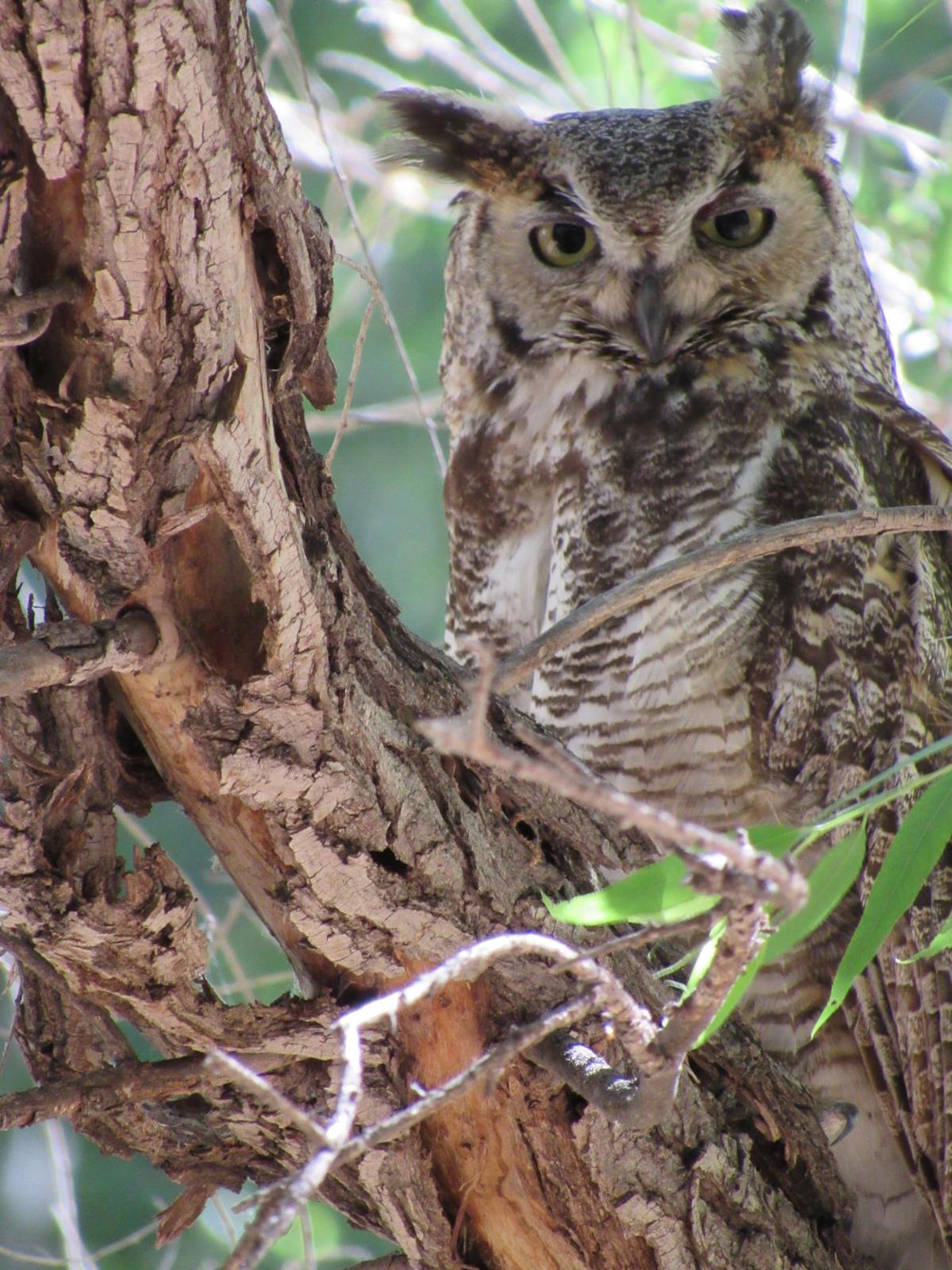 While volunteers walked the San Pedro River to collect data on wet and dry sections, a family played in the slow moving stream near the Charleston bridge last Saturday.

Mountain lion tracks in moist soil along the river were spotted on the wet/dry mapping project last Saturday on the San Pedro River.

SAN PEDRO RIVER — Last weekend, over 100 volunteers were out again on the San Pedro River for the 21st annual wet/dry mapping project supported by The Nature Conservancy (TNC).

The volunteers are split up into teams with each one taking a stretch of river, called reaches, which are sections of a river with similar hydrological conditions.

Each year, teams trek the shoreline from the border north to the confluence with the Gila River, some 155 miles. They wade through the shallow river to note the reaches and parts of reaches which are wet and which are dry during the hotest and driest part of the year prior to the start of the monsoons.

For TNC hydrologist Holly Richter, it is a labor of love and a good excuse to spend a cool morning or two following the twists and turns of the river and its many tributaries, checking its health and gathering data on streamflow or lack of streamflow. This year, she walked five miles of the San Pedro River and rode horseback for eight along the Baboquivari River, a tributary.

Richter has mapped reaches since the inception of the wet/dry project back in 1999.

“I started the mapping project when I moved here in 1998 to work along the San Pedro for The Nature Conservancy because there was so much disagreement about how much water the San Pedro River actually had,” she said.

“So, we asked volunteers to go out in teams, look at the river and map where they found water at the driest time of year. That provided the beginning conversations about local water issues and what was really happening. There was so much enthusiasm for the project after that first year, it became an annual volunteer event.”

“It’s also grown to include much of the river from its headwaters in Mexico all the way down to the confluence with the Gila River, and many its larger tributaries.”

Wet/dry mapping is simple thanks to hand-held GPS units. The volunteers record the beginning and endpoints of every wet portion along a stream or river. Using GIS software, these points are later translated to lines on a map for display and analysis.

TNC’s wet/dry mapping project builds goodwill between people and helps toward a common understanding of the river and its status. The streams and rivers covered by wet/dry mapping flow through a mix of public and private lands.

The TNC program has been recognized for its technical merit and scientific value, explained Richter.

“This year for World Water Day, the National Academy of Sciences recognized the river mapping technique developed on the San Pedro as an important tool for citizen scientists to use for measuring water availability in desert rivers,” she noted.

“We have not seen a long-term decline of flows throughout the San Pedro Riparian National Conservation Area (SPRNCA), based on the wet/dry data collected so far,” Richter explained.

“In fact, the area near Palominas has shown an improving trend in terms of the wetted length of river in that area. The volume of water pumped in that area nearest the river has declined and that has likely improved the groundwater levels. Last year the SPRNCA was the driest it has been since wet/dry mapping started in 1999.”

Ted Mouras is a dedicated volunteer who has been wet/dry mapping for 14 years. He and TNC teammate Brooke Bushman trekked five miles of the river from Charleston Bridge to Boston Mill. He, too, saw more water in the reach than the previous year, though it was still dry for about 20 percent of its length.

“We now have 20 years of wet/dry survey data, so we are at a point where we can begin to note if there are any trends. We certainly have insight into changes seen over this period of time,” he said.

Mouras added, “I do this because I believe it’s important to protect the last free-flowing desert river in Arizona, and the way to protect it is through data. The wet/dry survey is one of the data points used to assess the health of the river. Of course, I also enjoy walking on the river.”

The volunteers also report on the wildlife they see and this year they spotted a bevy of furred, feathered and scaled critters. A big horn sheep was seen in a Lower San Pedro tributary.

“The fact that over 100 people help map hundreds of miles of the river and its tributaries, when it’s the hottest, driest time to be out there year after year, attests to how much people all along the river care about it,” Richter said.

“Different people might care about it for different reasons, but it’s really heartening to see what can be done when many different communities come together toward a common purpose.”

There is much said about trying to strike a balance between protecting the river and development,” Mouras continued. “But any ‘balance’ by its very nature comes at the expense of the river. Given that this is the last of its kind and the only north-south oriented, relatively intact river between the Rio Grande and Colorado River, I’d argue that maybe this time we should error on the side of protecting this last of its kind.”

The value of citizen science

Wet/dry mapping turns a walk through the cottonwood forest into meaningful science. Participants in the past have included ranchers, realtors, regulatory agencies, environmentalists, city council members, children and reporters. It gives interested citizens a chance to learn more about their rivers and get their feet wet in the ecosystem. Along the way, mapping volunteers have encountered species such as coatimundi, mountain lion, leopard frogs, bear, Gila monsters, bobcats, gray hawks and longfin dace.

Wet/dry mapping has been used to: