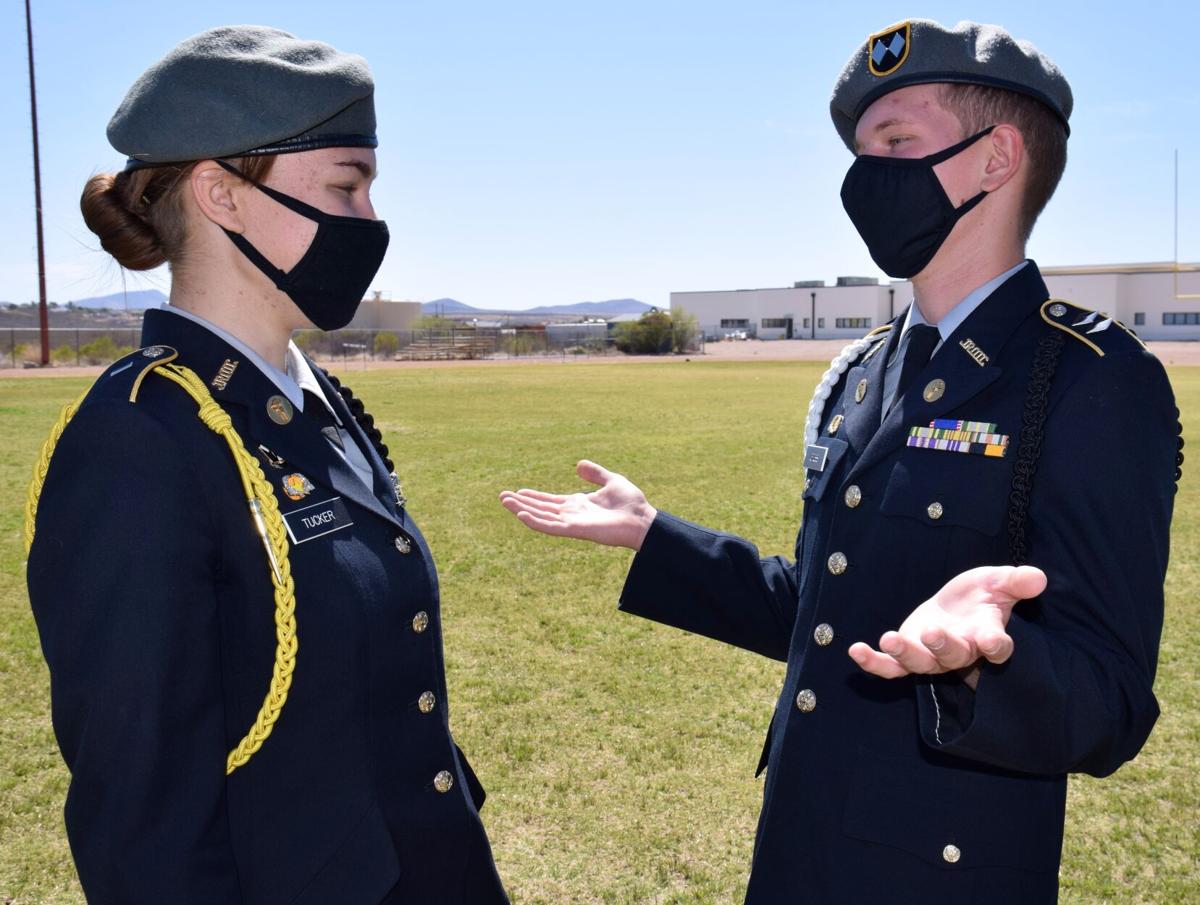 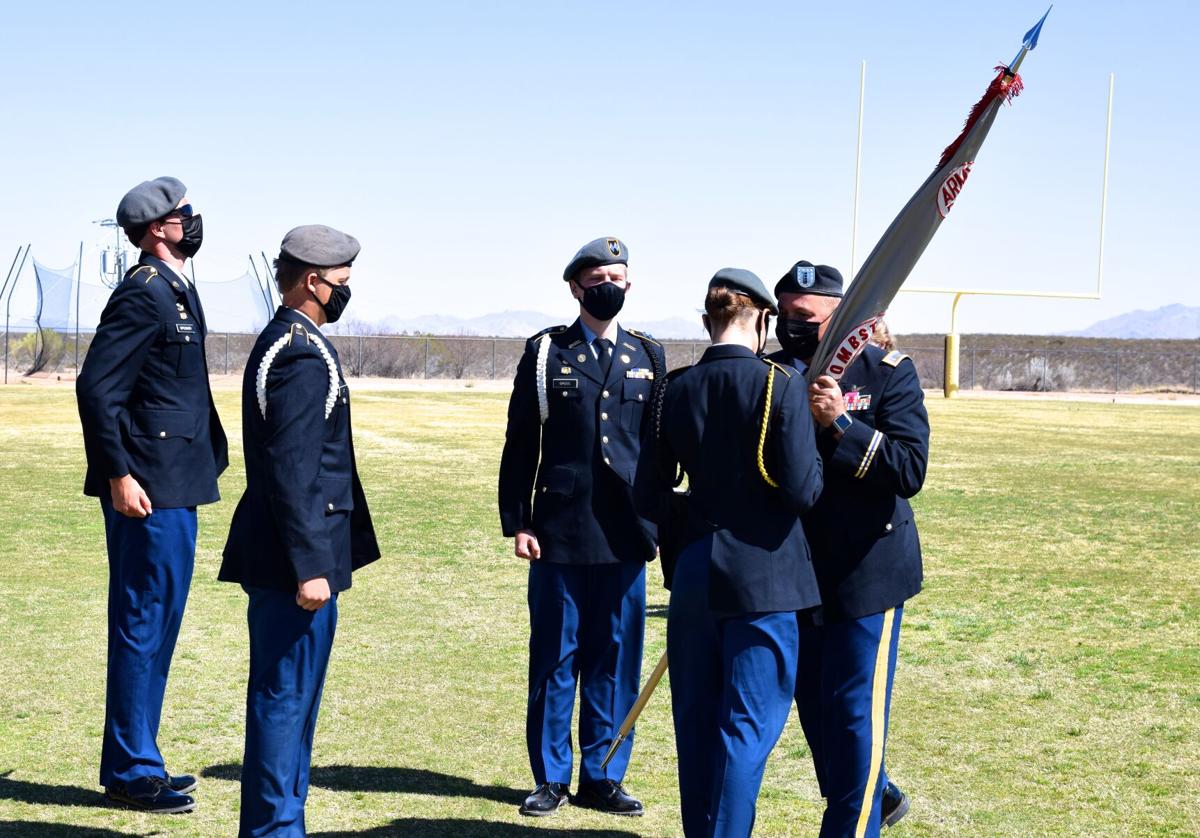 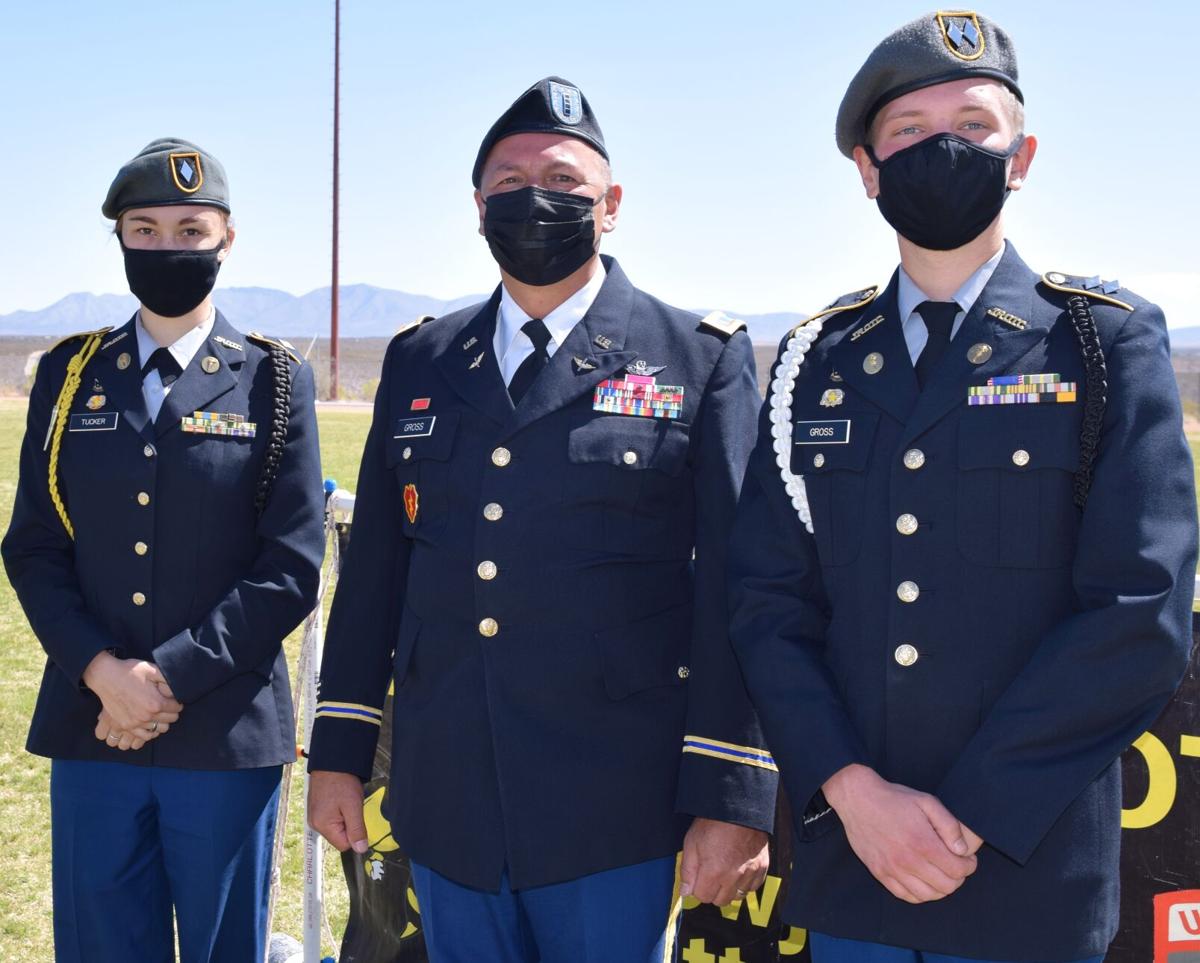 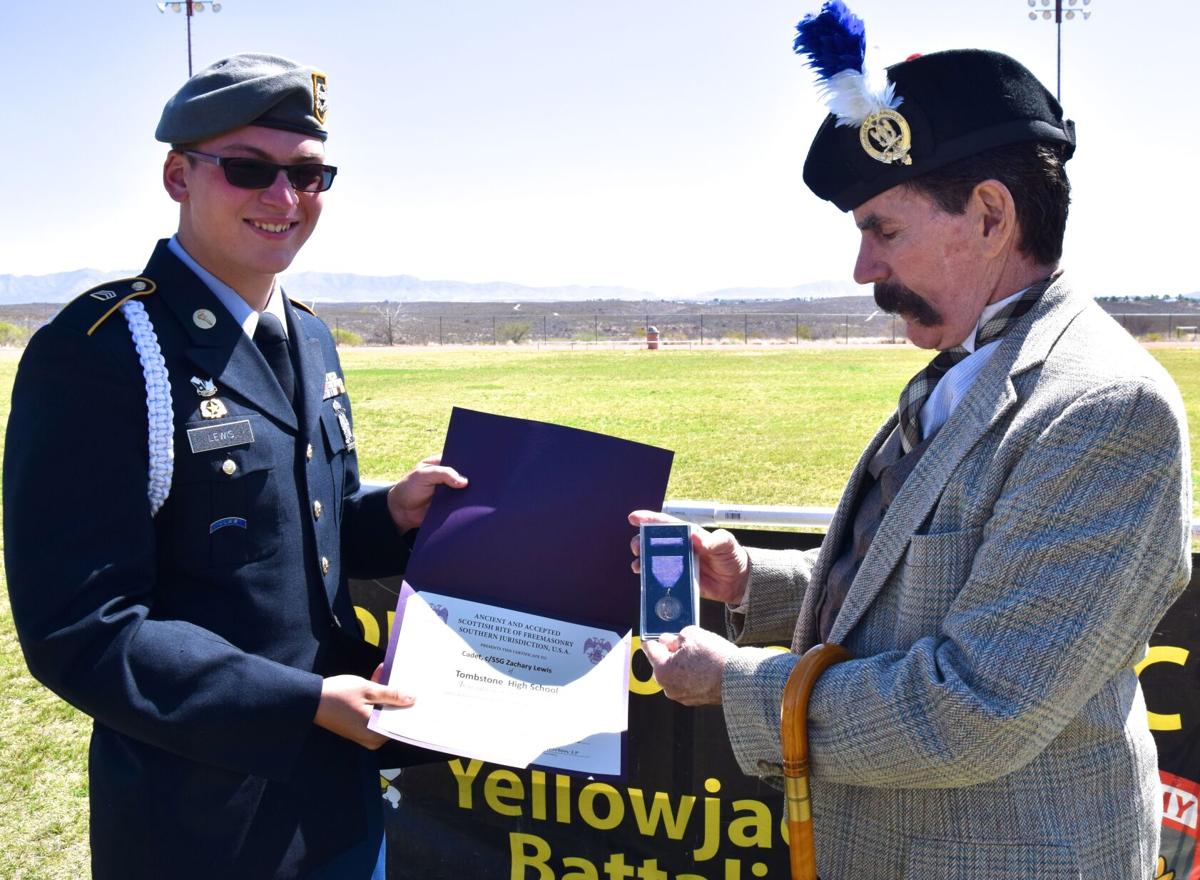 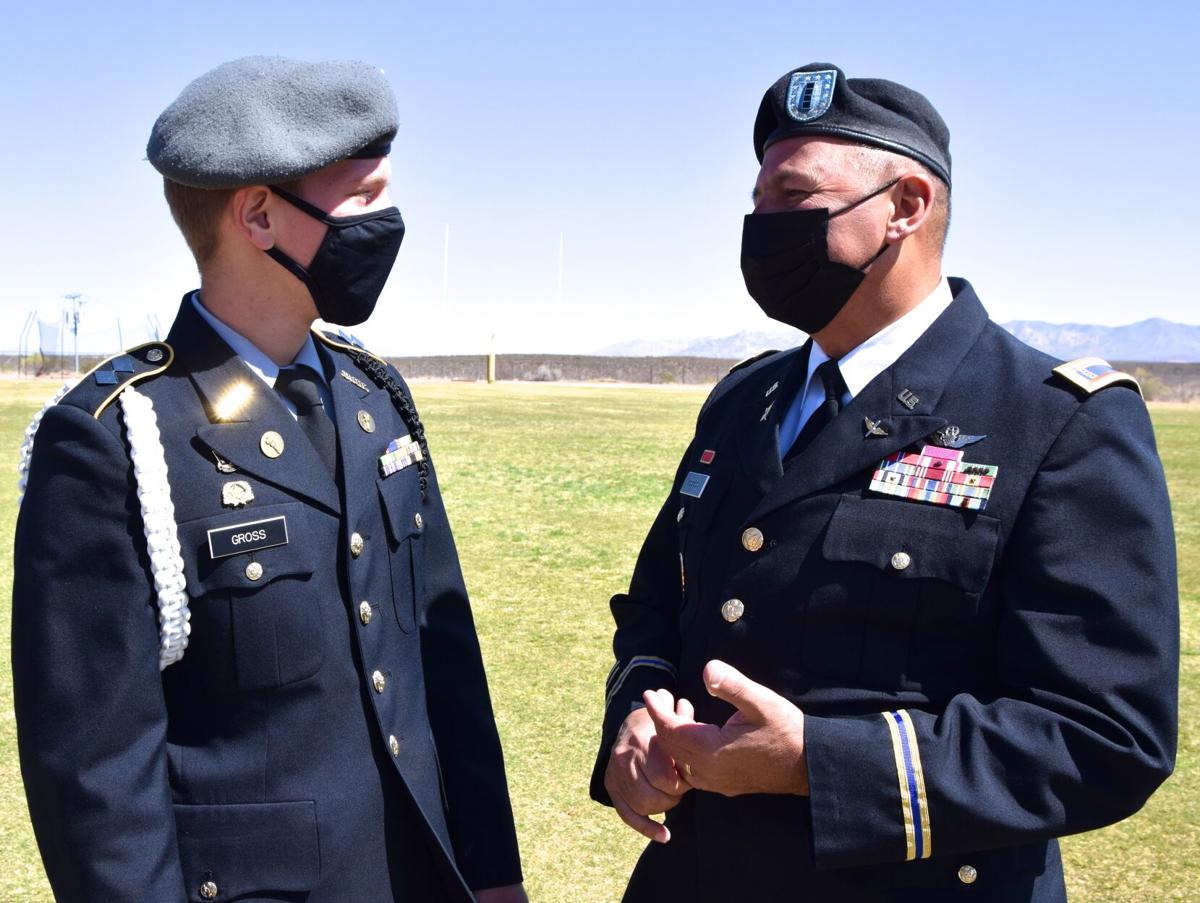 While reflecting back on a year of challenges and successes, Gross thanked all those who helped to make his command a rewarding experience, despite unique obstacles presented by COVID.

“To my command and staff, this year was without a doubt incredibly challenging,” he said. “I would like to thank each one of you for the work you’ve done and the time you’ve dedicated to our program.”

Gross praised the mentorship and guidance he received from the program’s two instructors, Chief Warrant Officer 4 (retired) Thomas Gross (no relation to the outgoing commander) and Master Sgt. Dan Kilpatrick.

“They are constantly looking out for every single cadet and their ability to motivate everyone differently is something I admire,” he said.

Yellow Jackets Battalion incoming commander Cadet Maj. Christina Tucker also earned commendations from Keenan Gross for her “leadership skills and ability to read and judge people,” which are attributes he said will serve her well as she steps into her new leadership position.

“You have a drive for completing tasks to the best of your ability, which is something the program values greatly,” he said. “Because of these characteristics, you will do great things as the new battalion commander.”

While the position and its responsibilities can be daunting at times, Gross advised Tucker to remember that her staff is a valuable tool, and to turn to them when needed.

“You will only be successful as a leader when your subordinates are successful,” he said in his concluding remarks. “Always be mindful of their strengths and weaknesses, and set them up for success.”

In her remarks, Tucker thanked instructors Gross and Kilpatrick for entrusting her with the battalion. She also thanked all those who helped her through tough times, and offered special words of thanks to the outgoing staff and commander.

“Keenan, you showed me what a leader looks like and gave me an example to follow, and for that I am grateful,” she said. “I am super excited for the year to come. Even though the existing pandemic is constantly affecting everything we do, we will stay strong as a battalion, and continue to put ourselves out there.”

Instructor Thomas Gross praised Keenan Gross for turning the JROTC program over to Tucker at “an all-time high.”

“We faced challenges this year that we could have never imagined,” Gross said. “Through all the adversity, we have thrived ... Many programs around the state and country took the free pass given by Cadet Command and stopped competing and holding events. The Yellow Jackets Battalion never quit, and found ways to make this as normal of a year as could be allowed.”

Gross noted that Tucker is taking command at a crucial point in the program’s history.

“This battalion is full of cadets ready and willing to give their all for you,” he said. “Do not take the challenge of command lightly ... Remember, you were chosen for a reason. You are a strong and confident leader.”

At the ceremony’s conclusion, prior to transferring the battalion guidon from outgoing commander Gross to Tucker, the following highlights of Tombstone High School’s JROTC program were read by a narrator.

The school’s JROTC was established in May 2011 and consists of three companies and a staff. Now in its 10th year, the program boasts one of only two JROTC mounted color guards in the country, its academic and leadership teams have qualified for the national finals in Washington D.C., and three teams have advanced to the platinum round of Cyber Patriot. In addition, the rifle and raider teams continue to bring home trophies wherever they compete.

“With the transfer of the guidon, the unit’s legacy is passed as the foundation for the future performance and achievements by the new commander and her unit.”

In his parting words to the seniors, Chief Gross spoke of how proud he is of their hard work and contributions to the program.

“As you go off to start the next chapter in life, whether it be college, the military or entry into the civilian workforce, I wish you the best of luck,” he said. You will always be part of the Yellow Jackets Battalion. You are welcome back any time.”

In addition to the change of command ceremony, 40 awards were presented to the cadets. The event was held on the football field so family members could attend while accommodating social distancing.