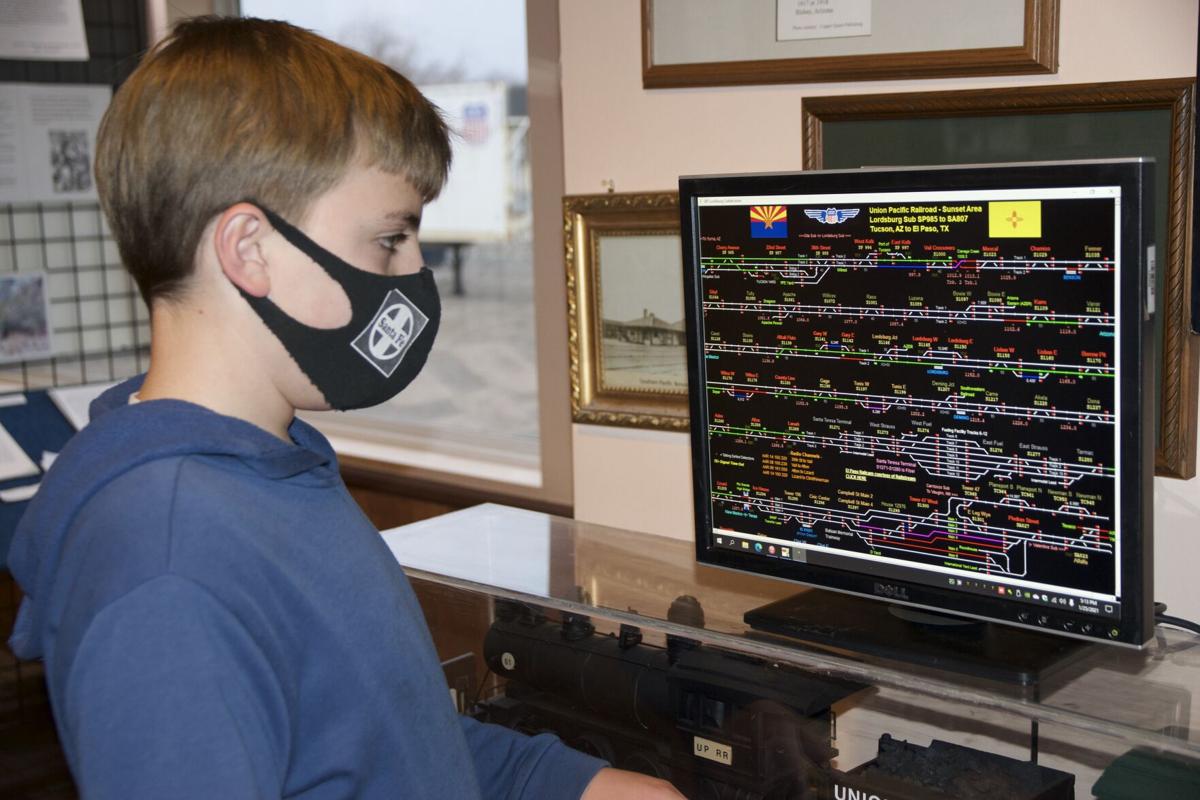 Train enthusiast Henry Tifft, 10, explores a new train tracking system that was installed at the Benson Visitor Center Saturday. The ACTS computerized system, which was donated to the Visitor Center by Jeff Rossi of RailFanAZ, allows users to follow trains from different locations as they roll through Benson. 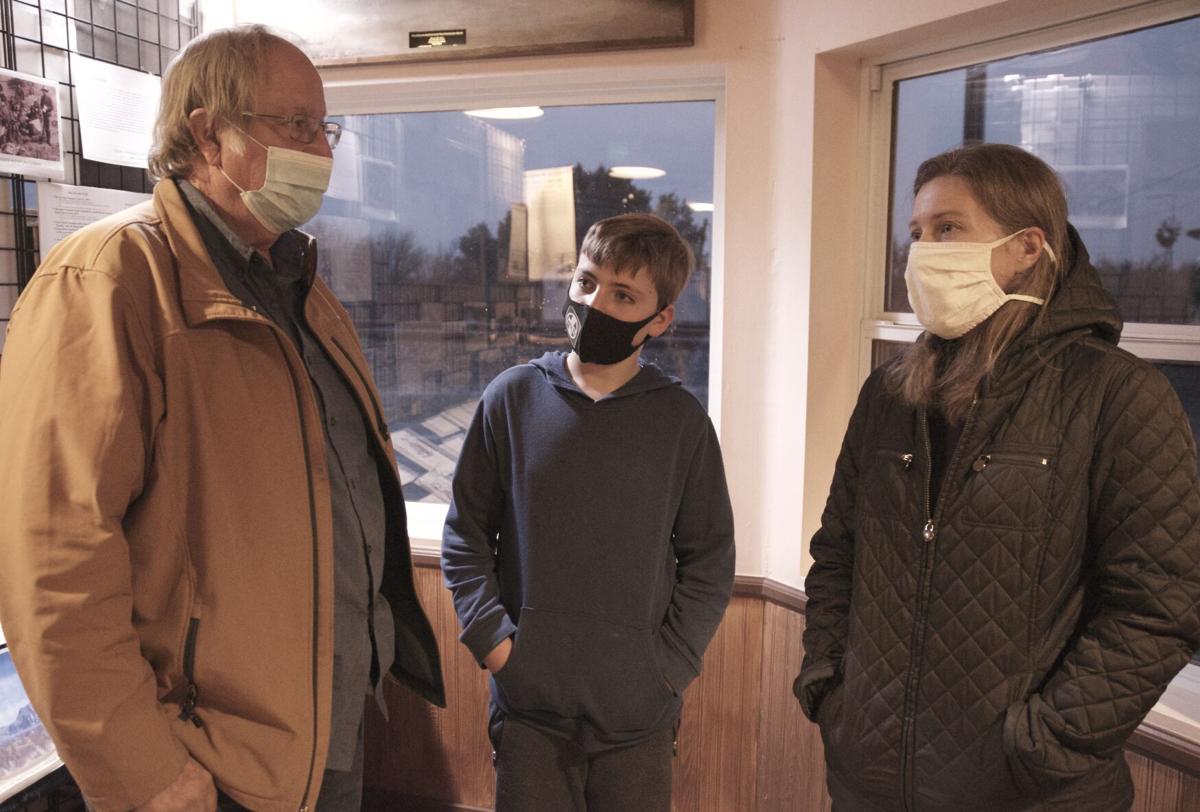 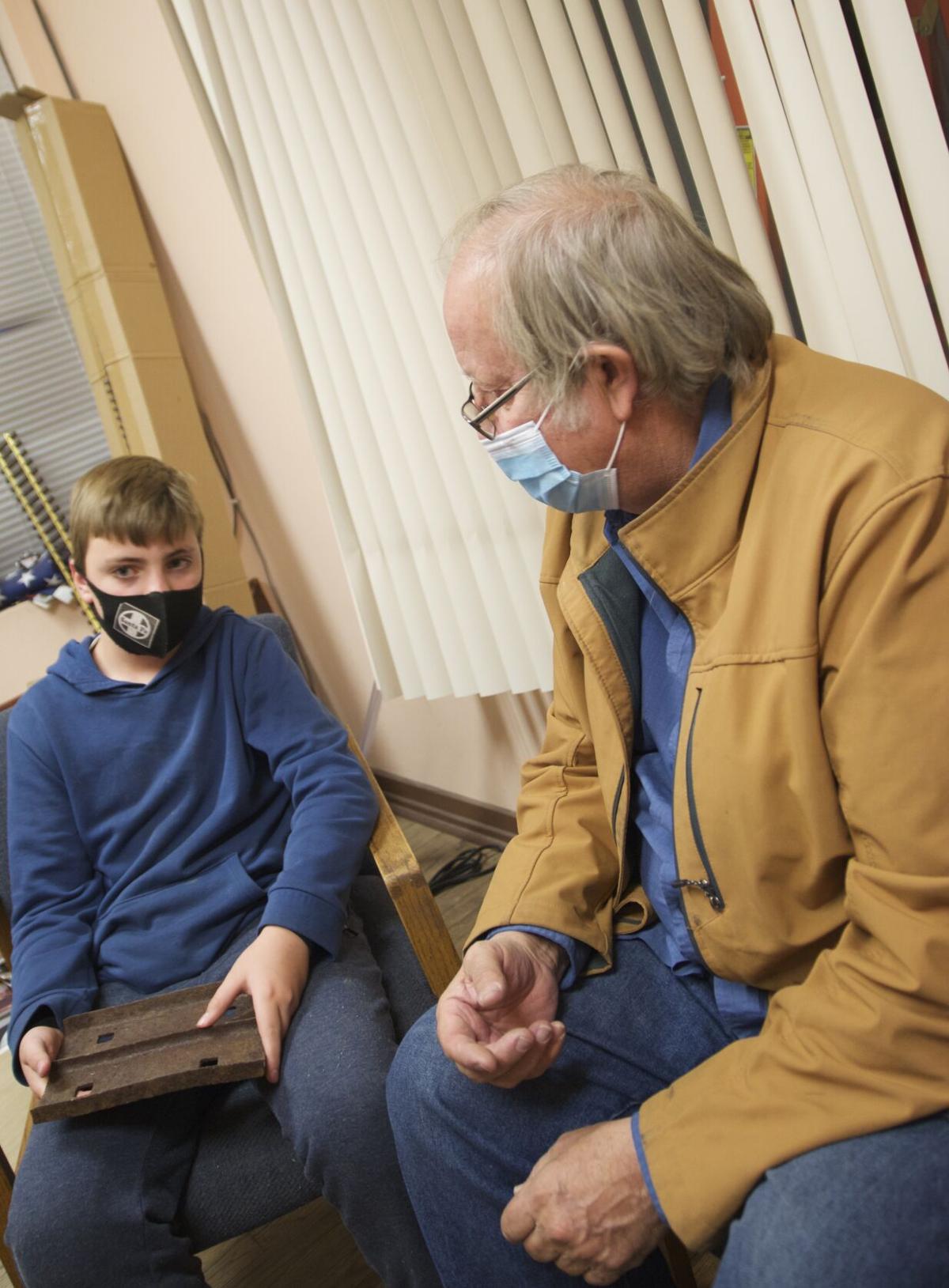 Henry Tifft, a 10-year old train enthusiast, admires an 1880s railroad tie plate while Bob Nilson of the Benson Visitor Center talks about how much the plates have evolved through the years. 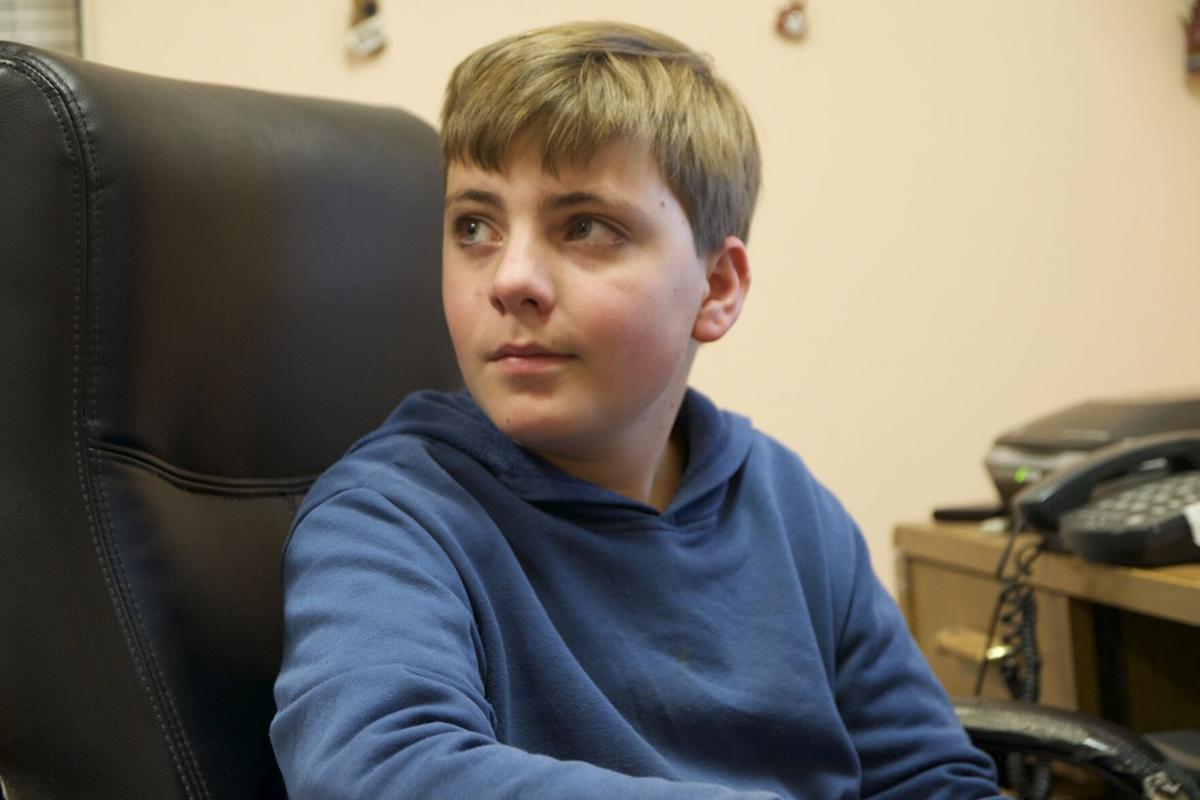 Henry Tifft, 10, shifts around in an chair at the Benson Visitor Center while watching a train as it rolls past the building Monday evening. 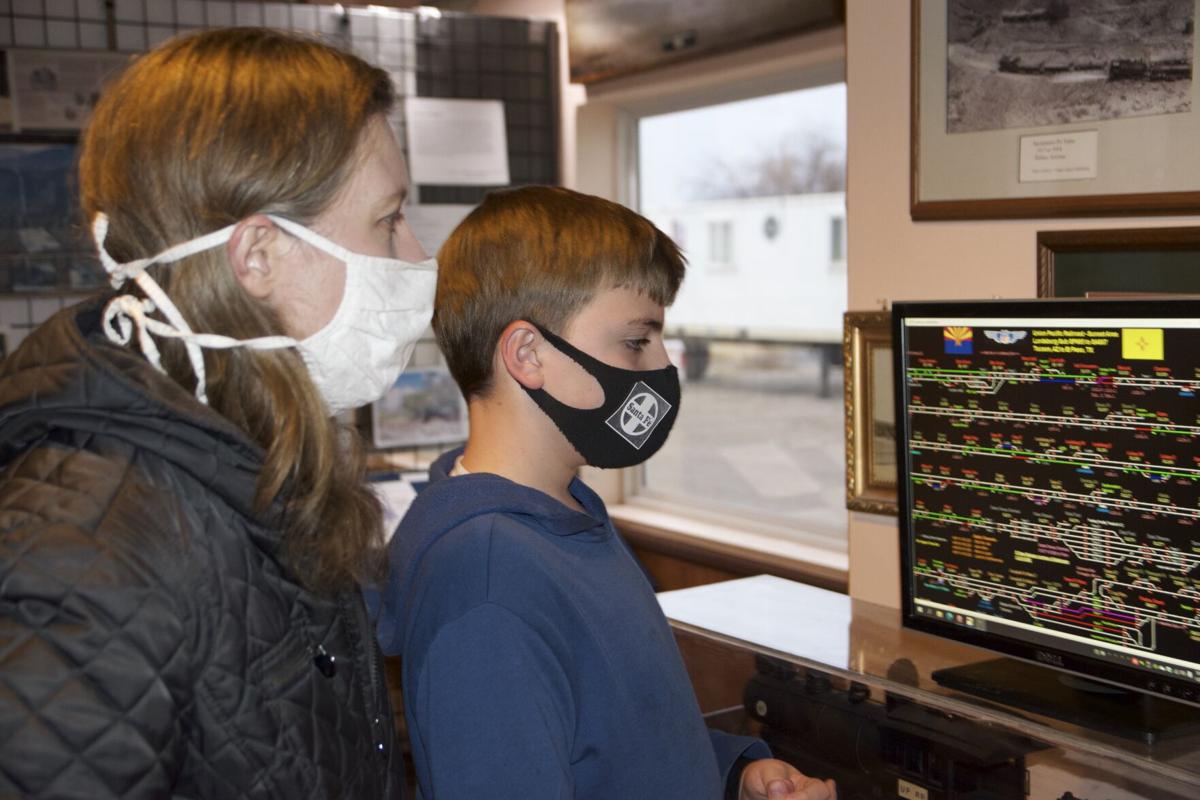 Karin Tifft and her son, Henry, follow a train on a new computerized system as it heads toward Benson.

Train enthusiast Henry Tifft, 10, explores a new train tracking system that was installed at the Benson Visitor Center Saturday. The ACTS computerized system, which was donated to the Visitor Center by Jeff Rossi of RailFanAZ, allows users to follow trains from different locations as they roll through Benson.

Henry Tifft, a 10-year old train enthusiast, admires an 1880s railroad tie plate while Bob Nilson of the Benson Visitor Center talks about how much the plates have evolved through the years.

Henry Tifft, 10, shifts around in an chair at the Benson Visitor Center while watching a train as it rolls past the building Monday evening.

Karin Tifft and her son, Henry, follow a train on a new computerized system as it heads toward Benson.

For as long as he can remember, this young Benson resident has been fascinated by the trains that roll through his hometown. He lives on a hill where he has a bird’s-eye view of the railroad tracks, frequents the Benson Visitor Center with its train-themed displays, and is an undisputed expert on just about anything “rail.”

The son of Karin and Casey Tifft, Henry plans to be a train engineer and is well on his way to achieving that goal.

“Henry lives and breathes railroad,” said Bob Nilson, who is the visitor center supervisor. “When he walks in the door, I take a back seat if he’s talking trains. His knowledge about trains, their history, and the rail industry’s impact on this country is beyond impressive, especially for someone his age.”

As a true rail fan, when Henry learned about the Visitor Center’s latest piece of train technology — a computerized tracking system that follows trains as they come through Benson — he went to the center Monday evening to see the equipment himself.

“I think this technology is pretty cool,” he said. “I need to use it more so I can understand how it works more fully, but I like it.”

Provided to the Visitor Center by Christi and Jeff Rossi of RailFanAZ as a donation, the Rossis were in Benson last Saturday to install the Advanced Train Control System at the center for the public’s use. ATCS allows users to monitor train movements on a particular section of railroad. The system is a replica of what dispatchers use while tracking and routing rail traffic all over the country.

“We have established multiple ATCS sites in Arizona and California at locations like the La Posada Hotel in Winslow, The Jackrabbit Trading Post in Joseph City and Jac’s Whistle Stop Cafe in Tacna,” the Rossis said through an email.

Information about the display in Benson and other RailFan train monitoring sites can be found on the website at https://www.railfanaz.com

“Being able to follow the trains is going to make a nice new addition to the Visitor Center,” Nilson said. “We get a steady stream of train enthusiasts through here, and they’re always fascinated by the railroad displays we have.”

Because of his passion for trains, Tifft is a familiar face at the visitor center.

“I’m in here a lot and I talk to people who come into the visitor center about trains,” he said. “I help them understand some of the terminology and answer questions.”

While on the topic of train terminology, Tifft is quick to warn against using the words “engineer” and “conductor” interchangeably. “People, and that includes the media, mix the two up all the time,” he said. “These are two totally different positions. Engineers drive trains and conductors manage the crew and passengers on the train. My goal is to be an engineer.”

When his mother suggested he might want to consider a “logistical position” with the railroad because of his technological skills, Henry immediately shot that idea down.

“I want to be an engineer, not a dispatcher,” he said. “I’m not interested in working inside an office on computers all day.”

After viewing the ATCS system, Nilson suggested that Henry sit at the computer in his office where he used Google Earth to look up different rail routes and abandoned train stations around the country.

“This one is the Communipaw Terminal in Jersey City,” he said while gazing at a majestic red brick building constructed in the late 1800s. “This one hasn’t been used since 1973. They stopped running the passenger trains in 1967 after the Central Railroad of New Jersey went bankrupt, but continued with freight service until 1973,” said Tifft, who is much like a walking railroad encyclopedia.

The next stop on Tifft’s train tour was the Utica station in New York, a stunning Italian-style building that was added to the National Register of Historic Places in 1975.

Describing the Utica station as “beautifully redone,” Karin said the Tiffts chose to go to Utica on a family trip because of the train station.

“The tile work and dome are glorious,” she said. “It has the oldest continuously used barber shop in a train station, and Henry’s grandfather had his hair cut there. They still have the original barber chairs and tiny little sinks from 1917.”

Along with visiting numerous train stations, Henry has traveled on passenger trains to Lordsburg, New Mexico, out of Benson, the Grand Canyon out of Williams and has taken a train from Tucson to Benson. He also has been on train rides in Colorado and traveled on the Attica Railway, to name some of his rail travels.

“He has gotten to hang out with the guys with the San Pedro and Southwestern and he has taken a ride on that train as well,” Karin said.

With about 40 trains coming through Benson every day, Henry was drawn into the world of rail at a young age.

“When he was in second grade, he was already reading very complicated coffee-table books about trains,” Karin said of her son’s passion. “So he was at the highest grade level in reading because he pushed himself to read about trains.”

His passion for trains continues to grow all the time.

“I think this new train tracking system is a good thing for the visitor center,” he said. “You can be a rail fan without having to do a ton of research on the UP timetable and to find your way around the internet. It’s going to help predict eastbound and westbound rail traffic, making it a lot easier to follow the trains.”