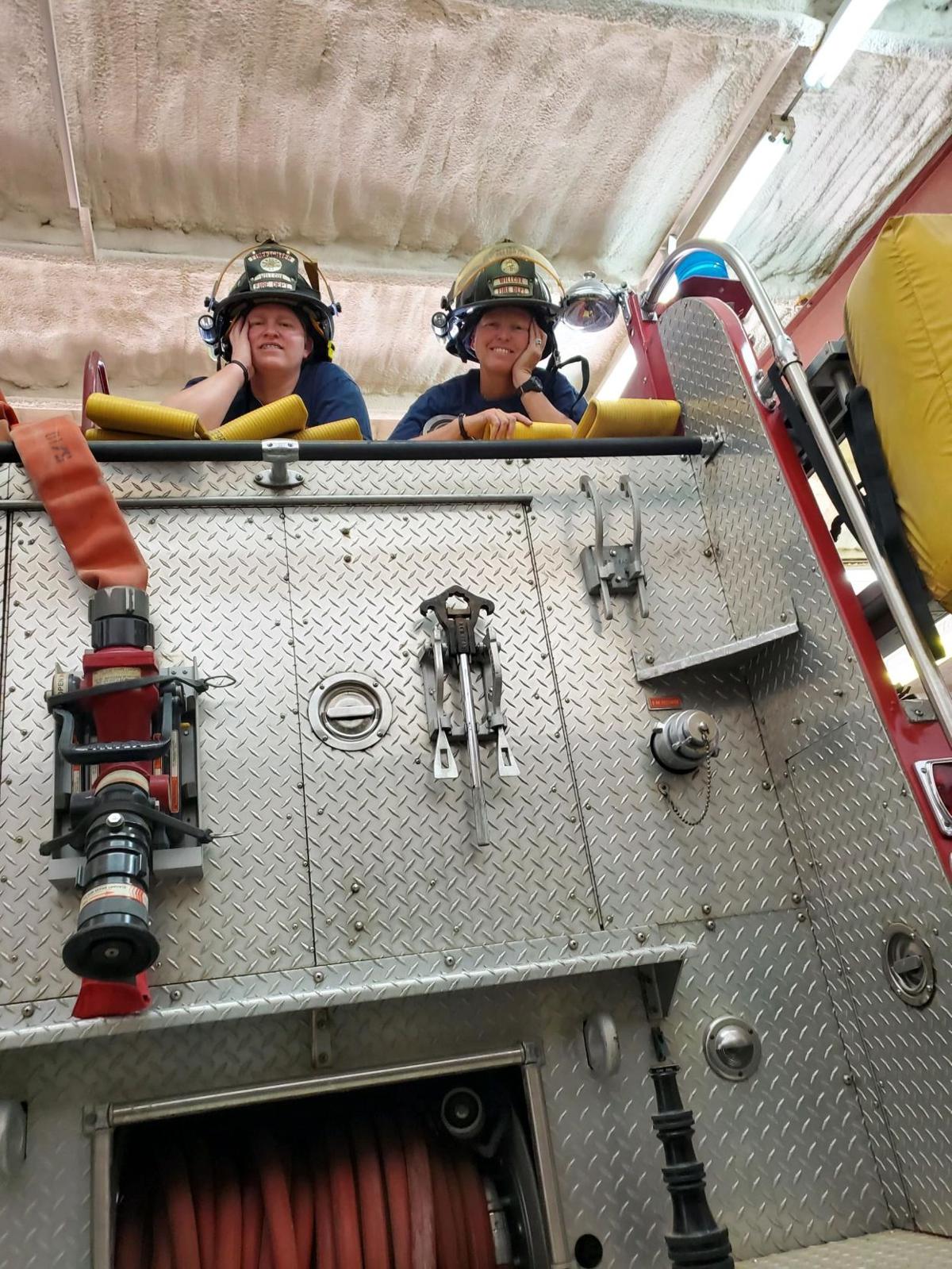 Kasey Callahan-English, left, and Marsha Callahan-English go on fire calls together. Although the fear of potentially losing their spouse is there, Kasey and Marsha have the advantage of knowing what each other needs even without speaking while on a fire call. 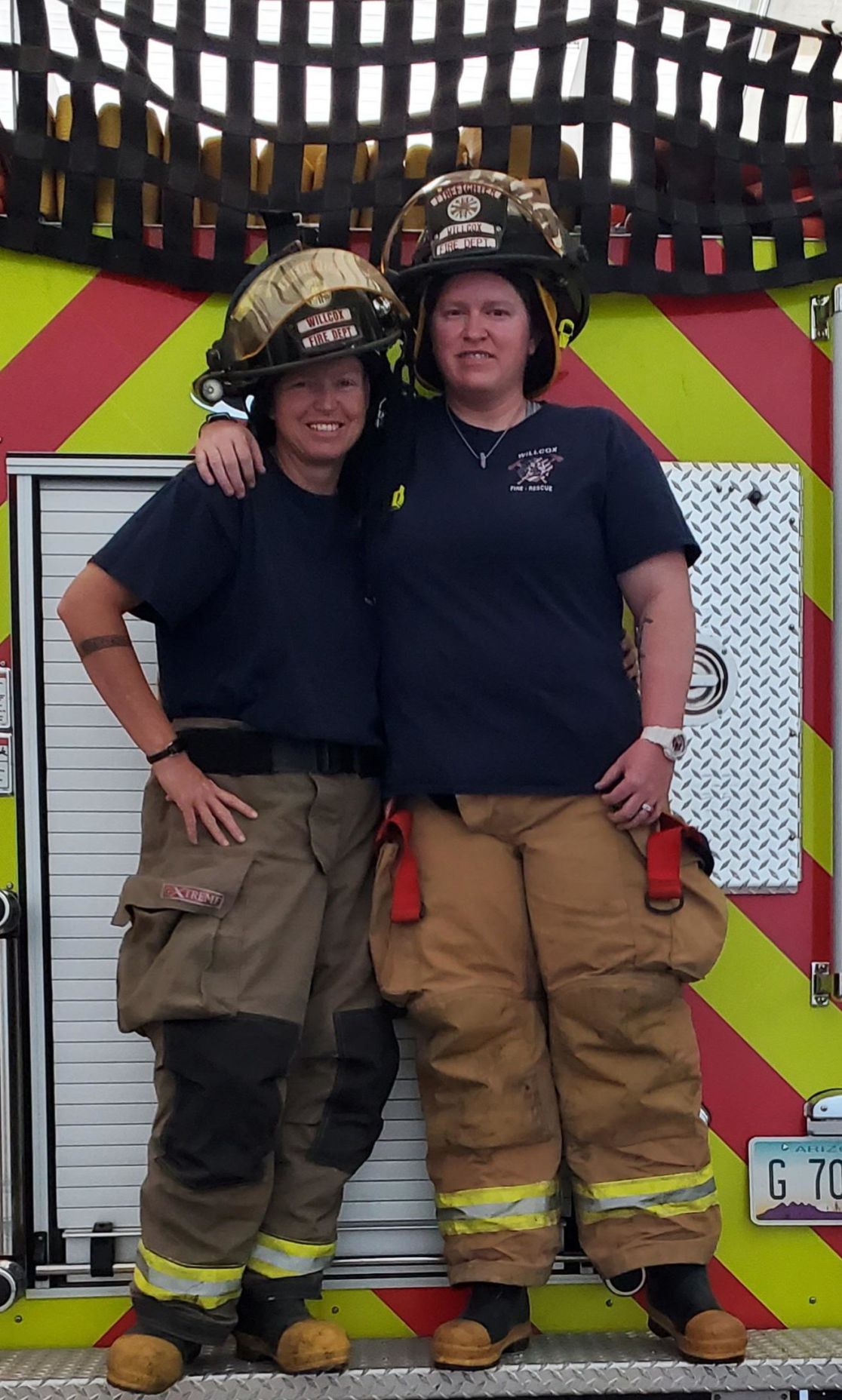 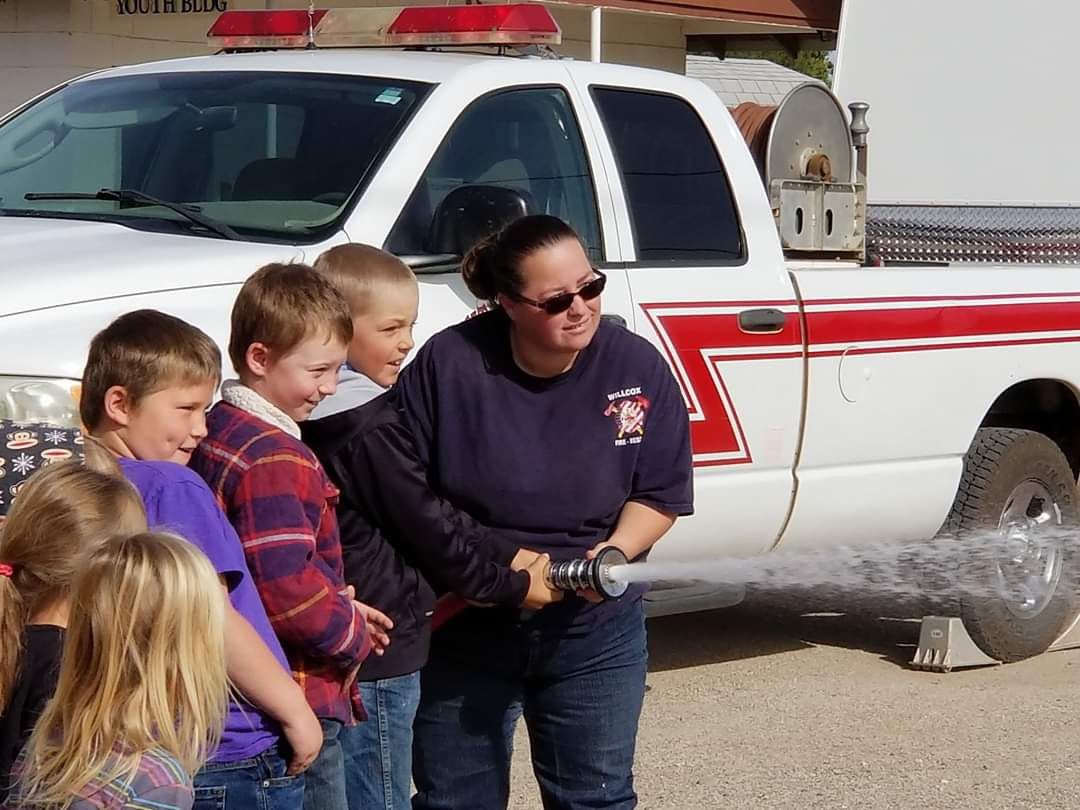 Willcox firefighter Julie Teeters shows some youngsters how to use a water hose. 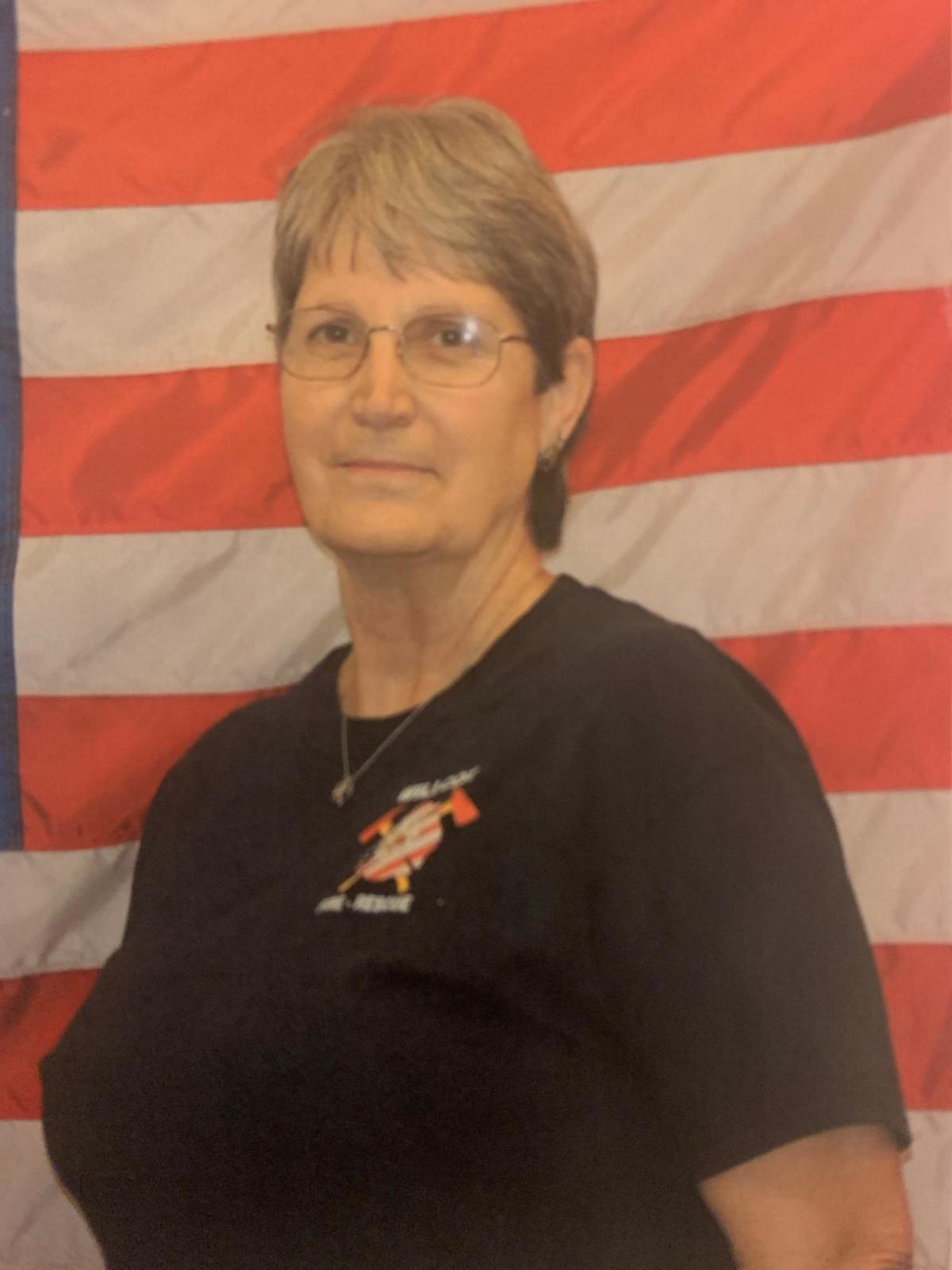 Assistant Fire Chief Patti Ackerson-Rodriguez was the first woman firefighter in Willcox, starting her career in the area in 1988.

Kasey Callahan-English, left, and Marsha Callahan-English go on fire calls together. Although the fear of potentially losing their spouse is there, Kasey and Marsha have the advantage of knowing what each other needs even without speaking while on a fire call.

Willcox firefighter Julie Teeters shows some youngsters how to use a water hose.

Assistant Fire Chief Patti Ackerson-Rodriguez was the first woman firefighter in Willcox, starting her career in the area in 1988.

There’s one adjective that can’t be used to describe the female firefighters of Willcox, and that one word is sedate.

The women firefighters in Willcox work full-time as emergency room nurses, dispatchers and police officers. These women gear up and show up.

Assistant Fire Chief Patti Ackerson-Rodriguez was the first woman firefighter in Willcox, starting her career in the area in 1988 when firefighters were paid full-time wages.

When the department switched to volunteer firefighting, Ackerson changed her day job to be the communications and records supervisor for the Willcox Police Department. Now a great grandmother, Ackerson has lived in Willcox for 31 years.

“I had no actual goal in life except to be a mom and wife,” Ackerson said. “I enjoy being able to help people.”

Ackerson said she has been discriminated against at times in her career as a firefighter. However, she said she has proven herself time and again.

“I basically had to be just like one of the guys,” Ackerson said. “I don’t care. I know in my heart I’m doing the best I can.”

“It’s hard work. It’s strenuous, it’s stressful, it’s heartbreaking,” she said. “But in your heart, you know you’ve done the best you can. In my opinion, it’s a very thankful and gratifying job.”

Ackerson said the most heartbreaking memory she has is of the Willcox school burning.

“We tried so hard to save the high school when it was on fire. It affected the city the most. We fought that fire for days and we were out there for at least three days,” said Ackerson.

Marsha Callahan-English and Kasey Callahan-English both volunteer for the Willcox Fire Department. Marsha works as a police officer for the City of Willcox as a day job, while Kasey is an emergency room nurse and paramedic at the Northern Cochise Community Hospital.

Marsha started volunteering with the Willcox Fire Department in 1997, leaving for some time to later return to the department in 2017. Marsha is an engineer, able to drive the fire truck if needed. Kasey started in firefighting in 2017 as a wildland firefighter.

They have three children and work together as a tag team when it comes to firefighting calls. When asked how they choose who goes to a fire when there isn’t a babysitter available, Marsha said that if the call has a medical situation going on, Kasey will attend it. If one of them has the day off while the other is just getting home from work, the one with the day off will answer the call.

“There’s this weird little connection, I can tell what she needs without talking to her,” said Kasey. “It’s terrifying because she can be one of the ones that doesn’t come out.”

Together Kasey and Marsha work through the stress of going on fire calls together, acknowledging the danger.

“We’re mostly trying to make it home to our family,” Marsha said. “It’s a lot of emotions you go through.”

Kasey said one of the most difficult physical aspects of the job is wearing the heavy equipment. At any time a firefighter may wear an extra 95 pounds of gear. Marsha said the Arizona heat is what she considers to be one of the hardest parts of the physical stress of being a firefighter.

Mental stress is also another factor of being a firefighter. For Marsha, the loss of life in an incident hits her hardest emotionally.

“Anytime you have a loss of a victim to fire, or a crash — especially if they are children — it takes a while to get over that,” she said.

Kasey’s emotional stress is the fear something might happen to one of her fellow firefighters.

“We know we might not all go home at the end of the day,” Kasey said.

Kasey explained that she understands the gravity of the job all too well since a co-worker was shot while she was working as a paramedic in Billings, Montana.

One of the best feelings is to be able help put out the fire in a building, or saving someone on an accident scene, Marsha said.

Kasey said she finds the most emotional reward in rescuing humans and animals from the danger of fire. However, she also enjoys the educational side of being a firefighter, teaching children fire safety.

When it comes to discrimination of any sort within the Willcox Fire Department, Marsha and Kasey both say it is non-existent.

“This department is amazing,” Marsha said. “They are equal with everyone.”

Julie Teeters started volunteering with the Willcox Fire Department in 1999, taking a break to go to college and then returning in 2003. Teeters also works as a dispatch operator for the City of Willcox, and is a mom to four children.

“I always wanted to be a firefighter. Dad was a fire chief here for a long time,” Teeters said. “I tried it, and really wanted to do it.”

She said the biggest reward for her is helping the Willcox community. However, the role of a firefighter is not an easy one. She said firefighters have to keep themselves in fit condition and can be out on calls with no rest and no relief for hours on end. However, Teeters said the emotional rewards of being a firefighter are amazing.

“When you save somebody from a burning building, it’s incredible. That feeling you get when you help somebody. There is no other feeling in the world like when you do that,” she said.

She admits sometimes it is hard being a mom firefighter, but with her youngest child starting school in the fall, she hopes fire calls will be easier to answer.

When asked what she might tell another woman who is interested in firefighting, her answer was simple: “Go for it.”

Teeters explained that volunteer fire departments can be a good way to try out firefighting. If an individual is interested in becoming a professional firefighter, they can then move from a volunteer department to a larger department in Phoenix or Tucson after receiving experience and training.

Teeters it has been her experience that some of the men on the firefighting team may be standoffish for the first few weeks. She said this is because the amount of trust within a firefighting team has to be very strong, and it is sometimes difficult for members of a team to trust a newcomer.

However, once a new member of the team can prove that they will be there for their teammates, the new firefighter will most likely be accepted by the rest of the department, she said. Aside from this initial cautious behavior, everyone is treated equally and there is no discrimination within the department, Teeters said.

Giving it a try

Jennifer Colby is a relative newcomer to the Willcox community, and works a day job as the City of Willcox community engagement specialist, but she is interested in becoming a firefighter. So far, Colby has attended two training sessions with the department.

“I’ve learned so much in training already and look forward to serving the community and working with the public safety force,” Colby said. “The fire department is one crucial piece of what keeps our community safe, and it’s an honor to learn to become a part of that.”

Assets to the department

Dale Hadfield, chief for both the Willcox Police and Fire departments, said he finds the women firefighters to be an integral part of his team.

“I have yet to find anything a male firefighter can do better,” Hadfield said. “I love the fact that female firefighters are integrating into a male-dominated field. They are absolutely an asset to the volunteer fire department.”