OK
You have permission to edit this article.
Edit 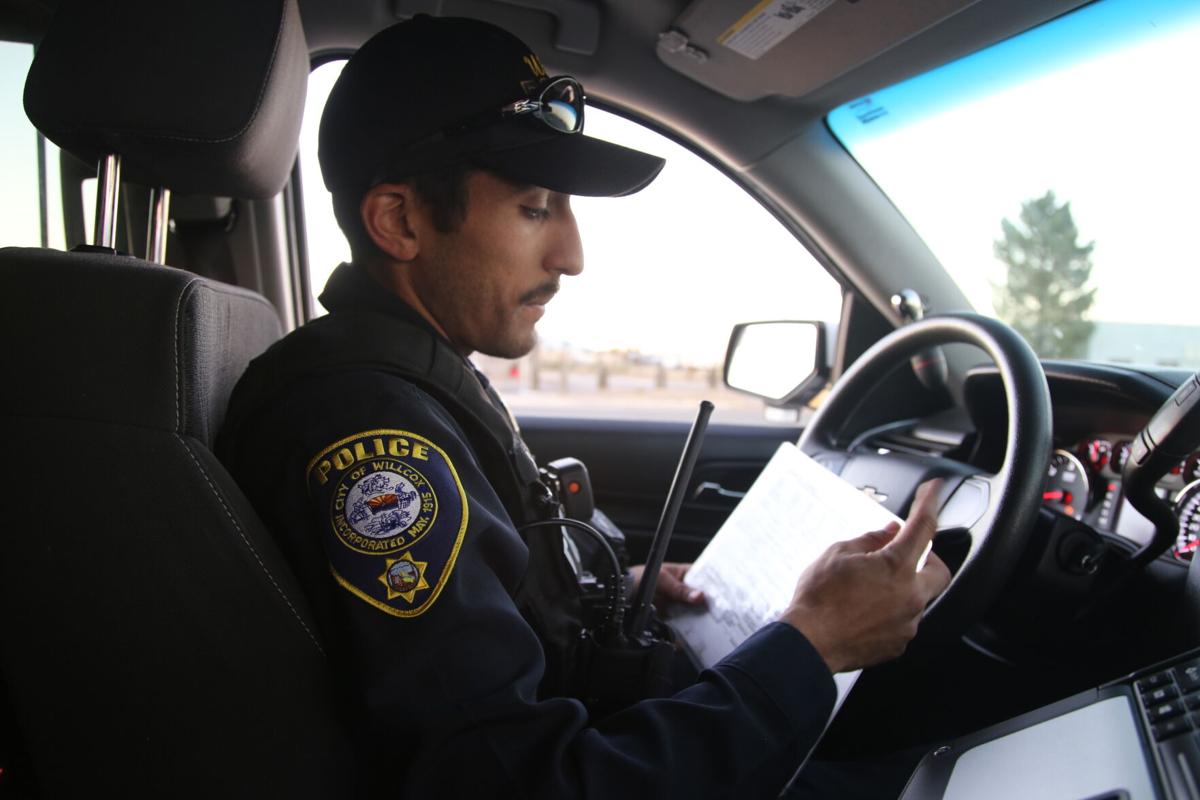 Willcox Police Officer Sergio Pacheco reviews some of the ways that will stand up in court to determine if a driver is intoxicated. Pacheco is a two-year member of the Willcox force. 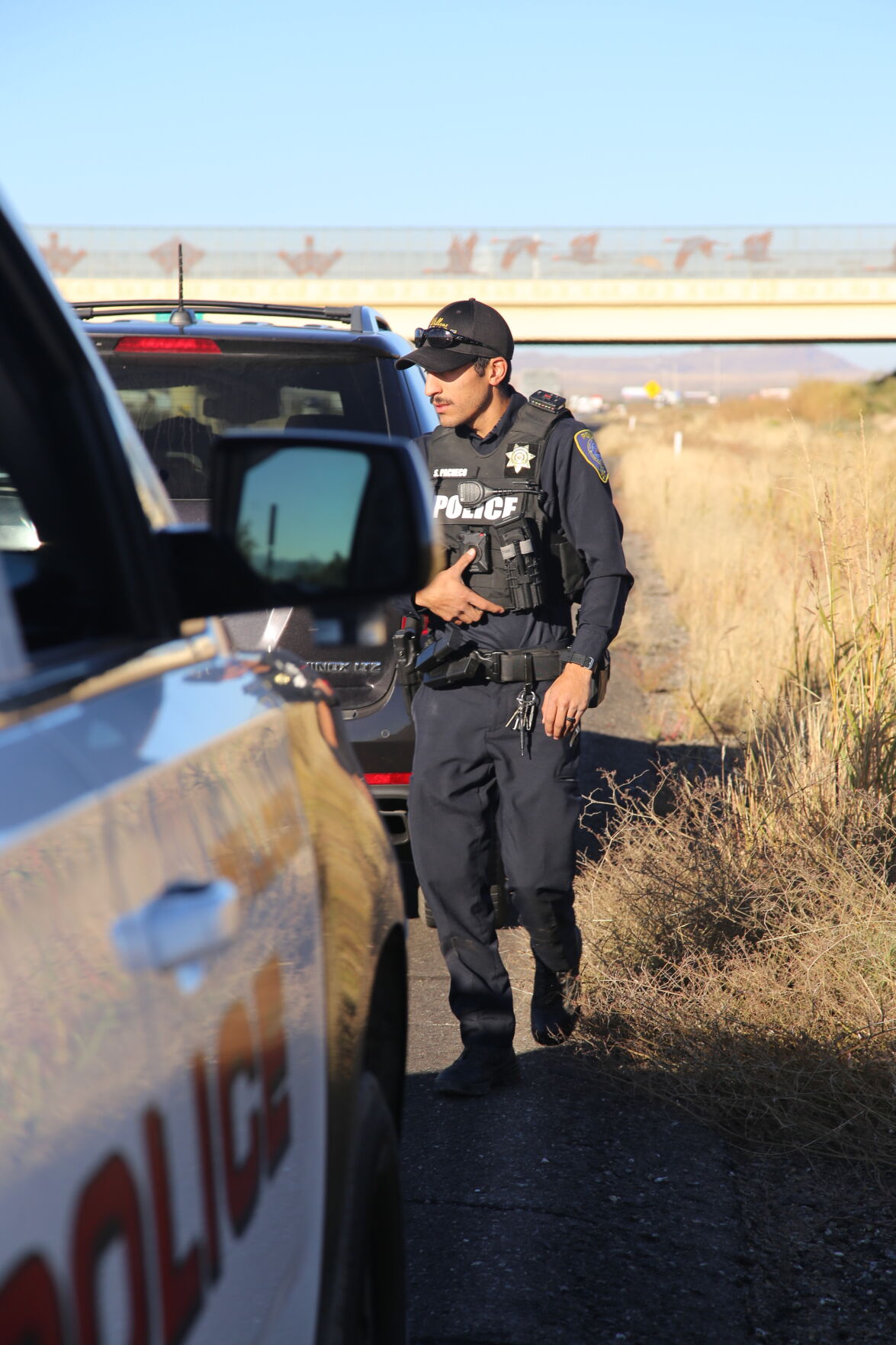 Willcox Police Officer Sergio Pacheco reviews some of the ways that will stand up in court to determine if a driver is intoxicated. Pacheco is a two-year member of the Willcox force.

WILLCOX — Police officer Sergio Pacheco has only one plan for the end of every day that he goes to work: to get home safely to his family, and if he can save a life in the process, even better.

It’s just all in a day’s work.

“We train a lot with de-escalation,” he said. “(People) are ready to snap at any moment, we have to bring them down to where they’re calm enough to talk to us. We’re not just law enforcement. We’re social services, we’re behavioral health, we’re emotional support. We do everything. One of the other officers and I, we talked a gentleman from jumping off of a bridge. He was up on a ledge with a rope around his neck. We were able to talk him off and got him the help that he needed.”

What’s it like being a peace officer in a small town like Willcox? For one thing, one day is never like the next. It’s always different, according to Pacheco. From the moment he checks in for his eight-hour shift it can be a lot of slow times patrolling the town when everyone seems to be behaving, or it can be exciting fast chases up and down the interstate stopping traffic violators but just issuing a warning, or at other times it can be heart-pounding stops that result in foot chases and arrests. “Ordinary day” is not in a police officer’s vocabulary.

“There’s no such thing as a normal day on this job,” Pacheco said. “It’s always something new. That’s the good thing about doing this job, it’s never the same thing every day. One day you can have no calls and another day you can have calls that are pending back to back to back. It gives you a variety of everything. You can deal with anything from domestics to civil complaints.”

There are some things that never change, however.

Pacheco’s day begins with a confab with the officer who worked the shift before his about what’s new in town. After that he checks over his equipment. Using tuning forks, he calibrates the radar gun that’s mounted on the deck of his patrol SUV. The radar is set to within 1 mile per hour more or less. Today, because his patrol car is in the shop getting serviced, Pacheco has to drive the swing car, a 2015 Chevy Tahoe that features failing air conditioning. Fortunately, on this day (last Thursday) it isn’t too hot and he can drive with the windows down. Finally, after all the preliminaries, Pacheco shoves off to protect the tiny city he calls home.

Even though it’s small (only about 3,200 people live in Willcox, according to the most recent census), Pacheco, 24, admits it’s still a thrill to pull out of the police building’s parking lot to begin the day’s work.

“Even being experienced, we still get excited,” Pacheco said.

Today things seem fairly quiet so Pacheco begins by patrolling the city. He makes his rounds, following the city limits, which is within his jurisdiction, although he may also cross city lines into county territory. As a state-certified peace officer, Pacheco is authorized to enforce the law anywhere in the state of Arizona, but unless requested, he stays within his own city. Pacheco patrols the cemetery, the park and the lake beds. He rolls up and down Railroad Avenue, Rex Allen Drive, Maley Street and just about everywhere around town. He knows where there might be speeding and drag racing, where people like to do donuts in their souped-up cars, where kids like to hang out, even where there could be trafficking in both drugs and humans. He keeps his eyes open.

One thing is clear: When Pacheco is on the job, he is alert. No matter how mundane or exciting the day goes, Pacheco is always, always alert. Any little noise and he is looking for the source. Pacheco hears the quietest sounds. Even while he is speaking, at least half of his attention is on what’s going on around him.

After patrolling the city, Pacheco pulls into a parking lot that is not quite concealed — you can see him easily if you look, but who’s looking? He leaves the engine running and watches the traffic and the radar. He’s nabbed plenty of speeders and stop-sign runners at this particular intersection.

“If I don’t have any prior commitments, like follow up or anything like that, then I just drive around, keep an eye on the town, look for traffic violations, look for criminal activity,” he said. “Then I get onto I-10 and do a little interdiction work.”

Traffic stops such as these might seem mundane, but Pacheco and his peers take pride in reducing the amount of speeding that was taking place in Willcox. Today no one seems to want to break the law, so after a while it’s time to get on Interstate 10 East.

Pacheco has a spot in the median he favors while he watches the fast-moving traffic. When doing radar work, Pacheco likes to give people a small amount of leeway, maybe a few miles an hour over the speed limit, but only a few. Not all officers feel that way, of course. Some, he said, will nail you for just two miles an hour over the speed limit. Still, speeding is just one part of the entirety when Pacheco is building a case. He watches for other violations, too, such as lane swerving, or items hanging from the rearview mirror, or taillights that don’t work. These are small but they could all add up to trouble.

When Pacheco sees something, he switches on the flashing red and blue lights and takes off after the vehicle in question. The Tahoe flies, going up to 100 miles per hour and faster. It handles the road well, and Pacheco is confident behind the wheel, but he is concentrating. He drives up beside the vehicle, looking in at the driver, even from his driver’s side, and signals the driver to pull over.

This time it was only a minor violation, but Pacheco never knows what he will encounter so he is careful about how he walks up to a vehicle, taking a wide berth as he approaches from the passenger side. He admits he still gets afraid, but that’s a necessary part of the job.

“When I took this job, I knew what it entailed,” he said. “I knew the consequences of some of the calls we have to go to. I knew the risks. I knew that there’s always a possibility that I won’t be going home at the end of the shift, right? And so, I don’t get afraid for myself, but what makes me afraid is not being able to go home to my family, and not being able to continue to do the work that I’m doing out here and continue to try to make the community safer ... If there’s a cop out there that tells you he doesn’t get afraid to some extent, then it’s time for him to retire. Fear is what helps keep us alive. It’s our ability to get past that fear and use that fear to our advantage that helps us do the job, if that makes sense.”

Pacheco has been a Willcox police officer for two years. In that time, he has never had to discharge his weapon. He is one class away from his associate’s degree, though he graduated from the police academy at Cochise College in Douglas. Even so, his training never stops. He’s been on at least six trainings since he joined the force two years ago. He’s learned everything from first aid to how to shoot from a moving vehicle.

Being a police officer was not always on his radar; in fact, he was looking to join the U.S. Marine Corps, but circumstances dictated a different course. Now married with a family of his own, Pacheco lives on 15 acres outside town, actually on the land where he grew up. His ties are deep here, so he stays. It’s also why he became a peace officer.

It’s especially true when he makes a drug arrest.

“He was raised in the community (he) serves, and we are very lucky to have him,” Hadfield said.

As satisfying as the work is, it’s also a job that takes a lot from the officer and his or her family.

“It definitely takes a type-A personality to become law enforcement,” Pacheco said. “You definitely have to have that type of go-getter attitude just to stay busy. It’s a hard job. Family life is hard. Just having free time is hard, but it is definitely a very rewarding career.”

As the day wears into night, Pacheco goes back to patrolling town. He is now looking for criminal activity, for people he knows from past experience could be involved in something nefarious. He’s also looking for drunken drivers and speeders, knowing this is the time they could be leaving local watering holes. Just as he is finishing up his day, thinking things have quieted down, screeching tires and a near collision grab his attention. Then, with lights flashing and siren sounding, it’s off to see why that happened.

If he could tell the people of Willcox one thing, it would be this:

“We’re out here doing our job, but we’re still a normal person like they are,” he said. “We have a job that we need to do, and our job is to promote the safety of the public. I tell people all the time, I’m not any better than them, I’m not any different than them. I have a job I need to do, and I don’t think any less of them for the mistakes they make. I don’t think they’re under me. I don’t think anything bad about them. If they give me respect then I’ll give them respect right back. Just because they made a mistake I’m not going to treat them any differently than I would if they didn’t. We just have to deal with the consequences of their mistake.”