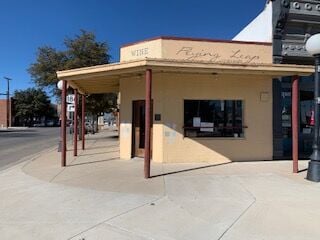 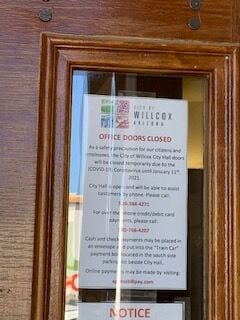 Posted signage outside Willcox City Hall on  Jan. 4 updates the public on the recent closure of City Hall to the public and COVID-19 protocol moving forward.

Posted signage outside Willcox City Hall on  Jan. 4 updates the public on the recent closure of City Hall to the public and COVID-19 protocol moving forward.

WILLCOX— Throughout a year with a global pandemic and the new phrase “socially distanced” was coined, Willcox’s city representatives responded in a manner they saw as most feasible.

Willcox City Hall closed its doors to the public on Dec. 28 out of a health and safety precaution as COVID-19 cases began to rise in the area, with the plan to reopen on Jan. 4.

That plan was revised due to the ongoing rise in COVID-19 cases in northern Cochise County. City Hall is available by phone to handle any of the essential services provided previously, but the building will be shuttered until Jan. 11.

Willcox City Council is looking to discuss the following pertinent manners: approving the liquor license of Birds and Barrels, which plans to move into the old Flying Leap Vineyards taproom on Railroad Avenue; approving and adopting the 2021 general plan; a resolution declaring as a public record documents filed with the city clerk regarding recreational marijuana; an ordinance amending the city council by revising Title 12, streets and sidewalks; and discussion and/or direction on the city’s response to the COVID-19 virus.

City manager Caleb Blaschke spoke to why the city council is pushing for an open door policy regarding the recent voter-approved recreational marijuana Proposition 207.

According to Blaschke, it comes down to three main reasons why the city council is in support of Prop. 207.

“Number one, people can grow it in their backyard already, there is nothing to tell them they can’t do that; number two, Arizona voters voted it in, they’ve already approved it; and three, to insure our police department gets revenue from any marijuana-related issues,” Blaschke said.

“New businesses will have to follow the same regulations as are already in our medical marijuana ordinance.”

“We copy and pasted from our previous ordinance regarding medical marijuana, so that it mirrors it,” Blaschke said.

The first city council meeting of the year will take place Thursday, Jan. 7, at 5:30 p.m.

A report will appear in next week’s Herald/Review County Edition.