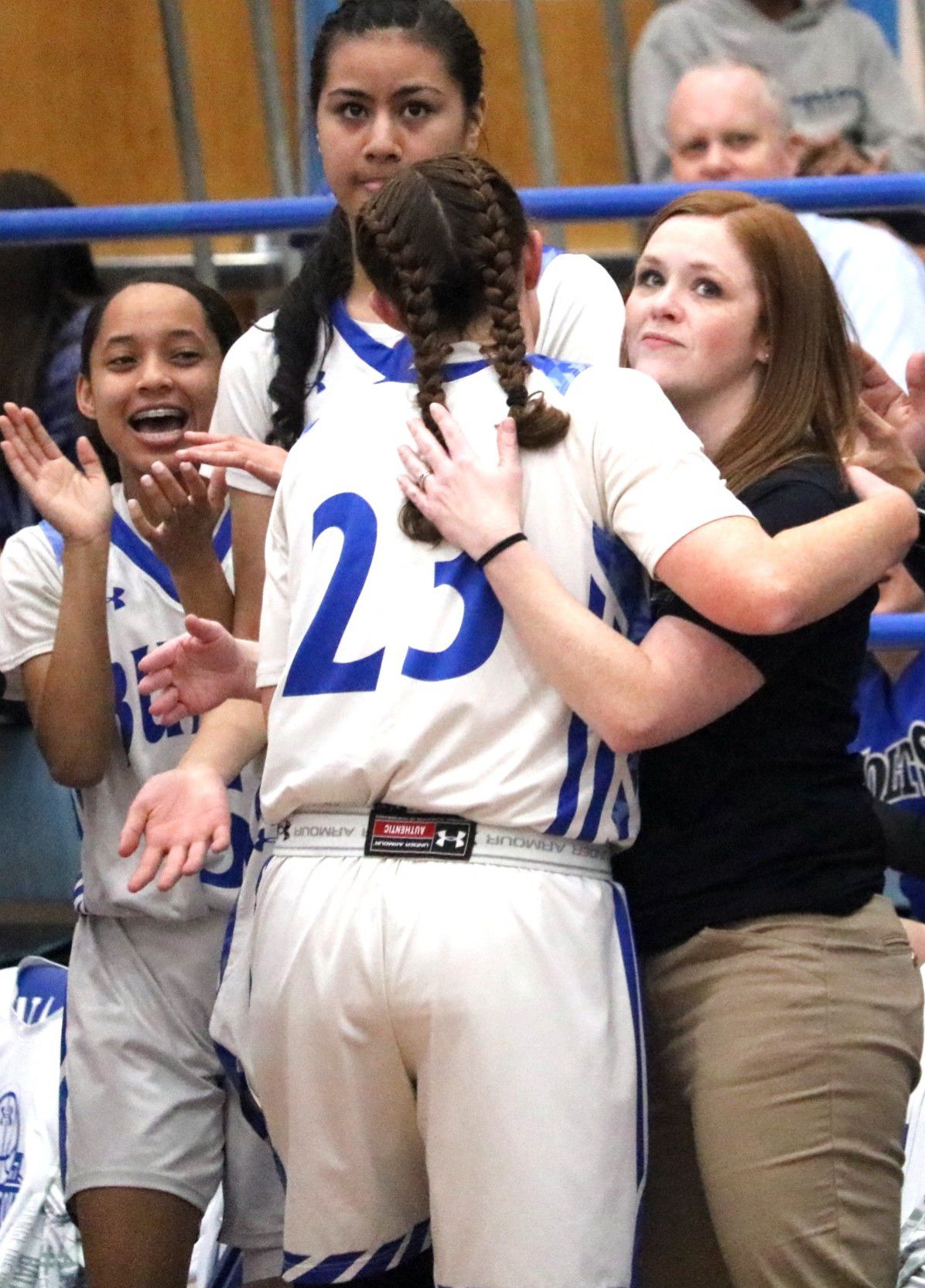 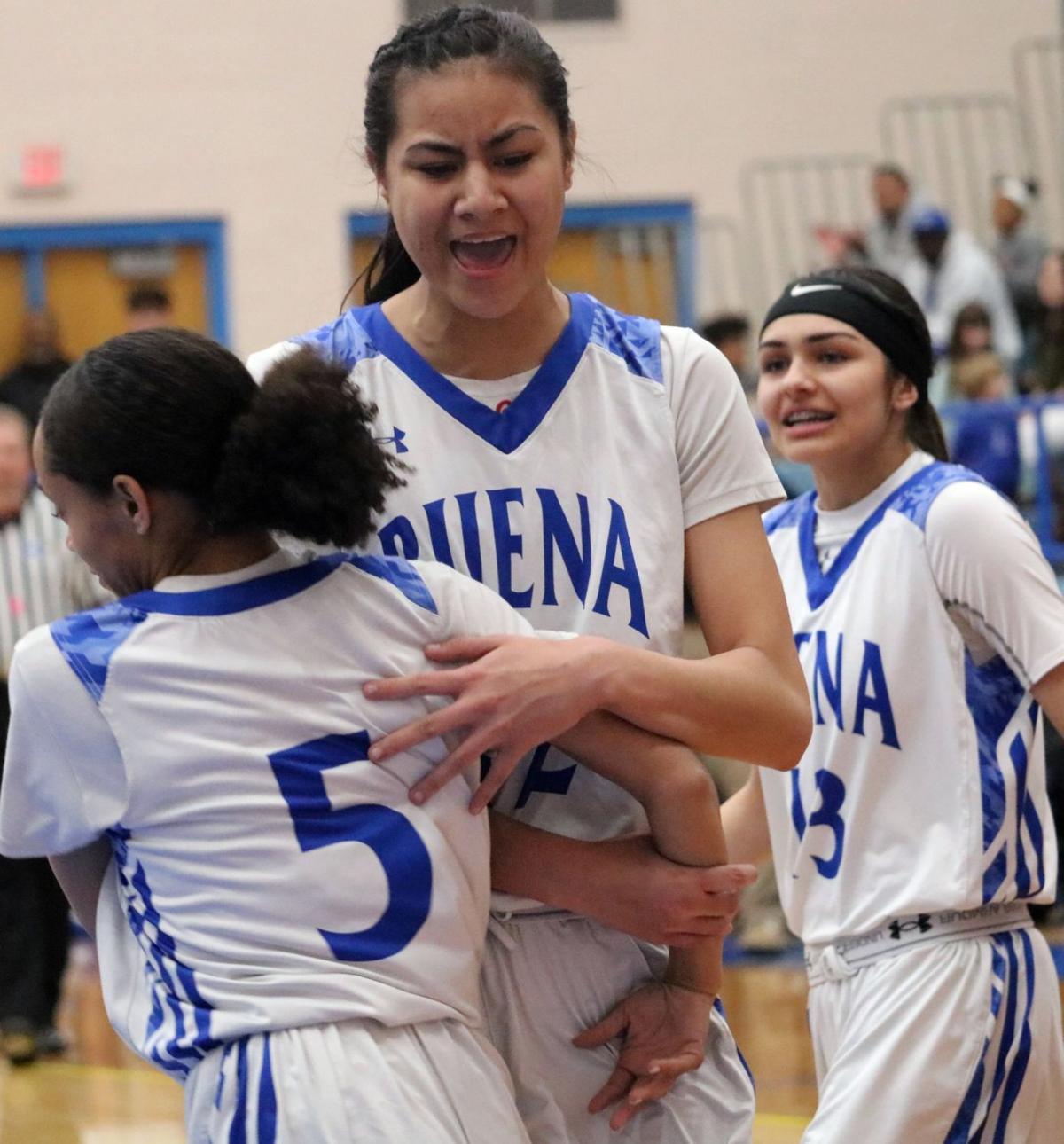 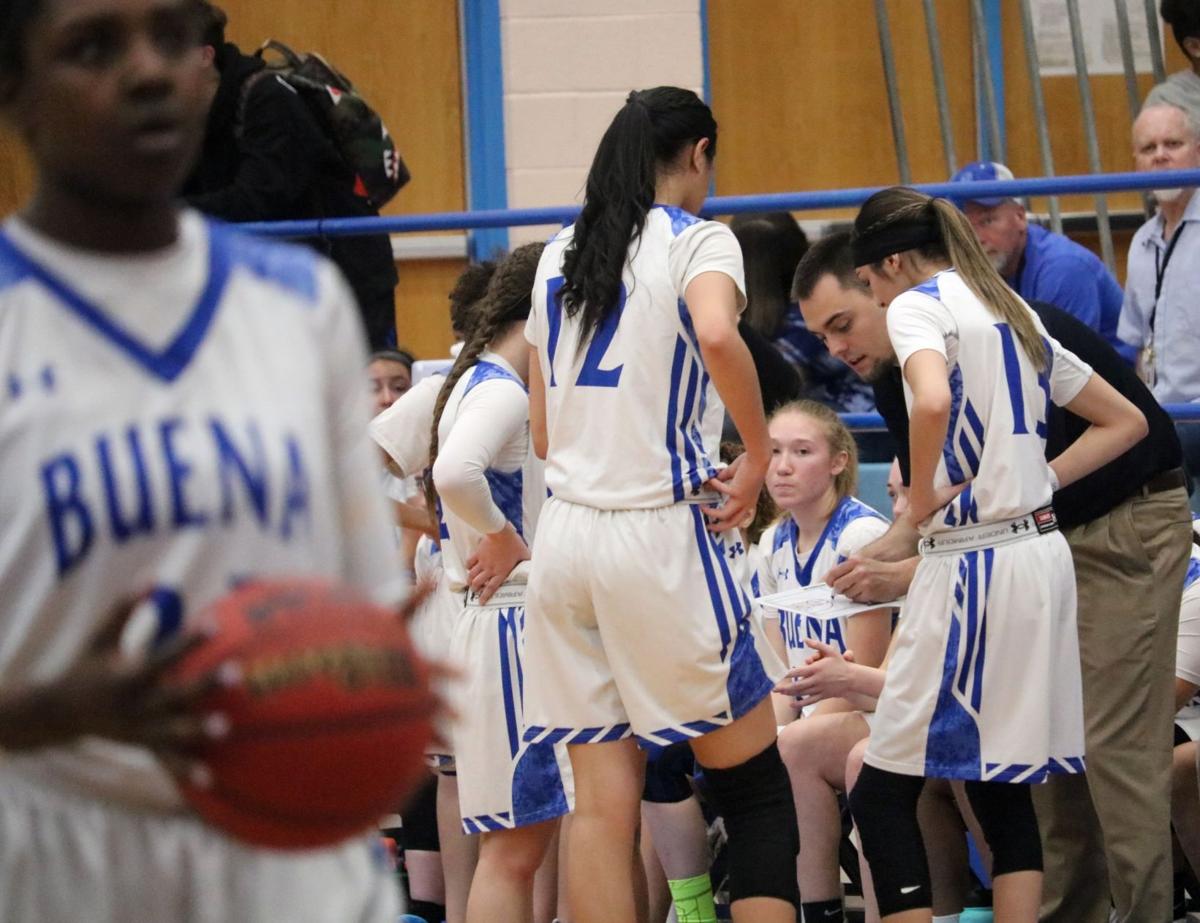 Coach Cole Colvin uses a brief pause in action to draw up a play for his team in the first half against Nogales on Friday. 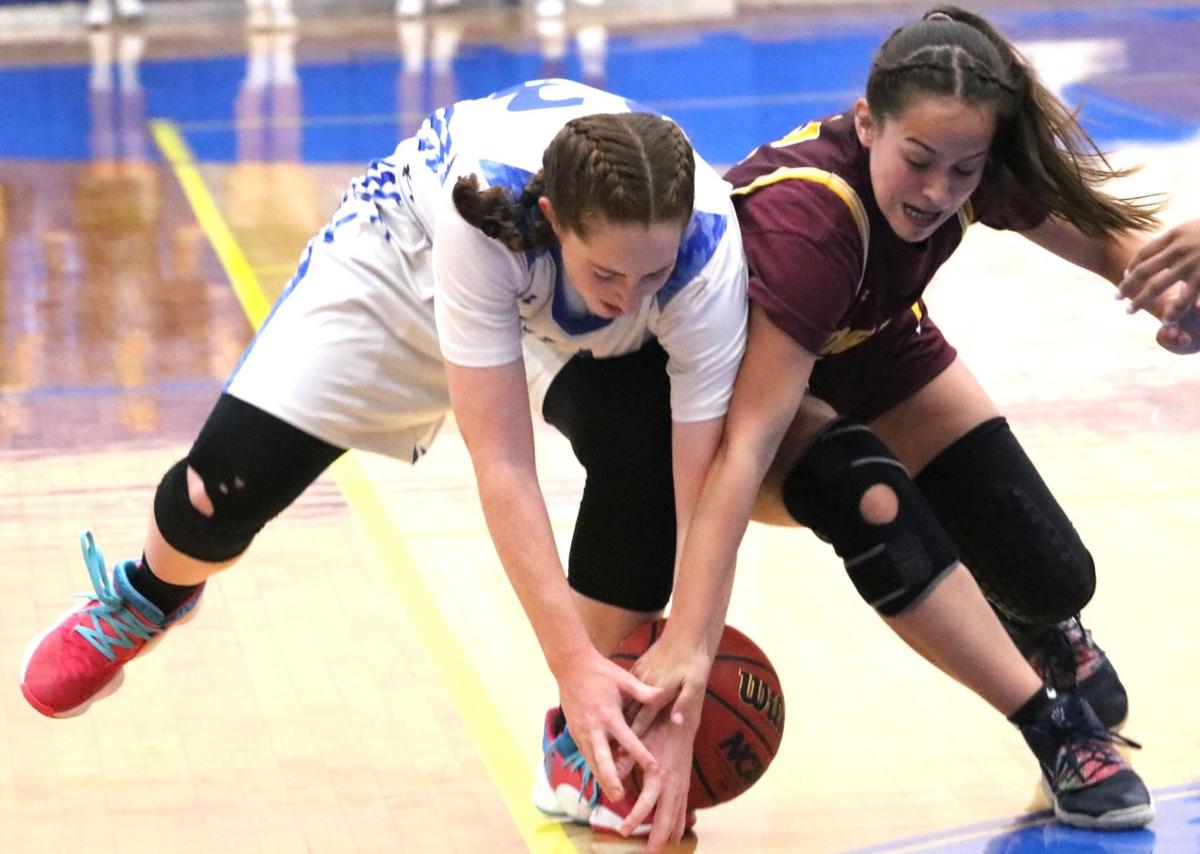 Lydia Griffith battles for the ball in the first half of Buena’s win over Nogales. 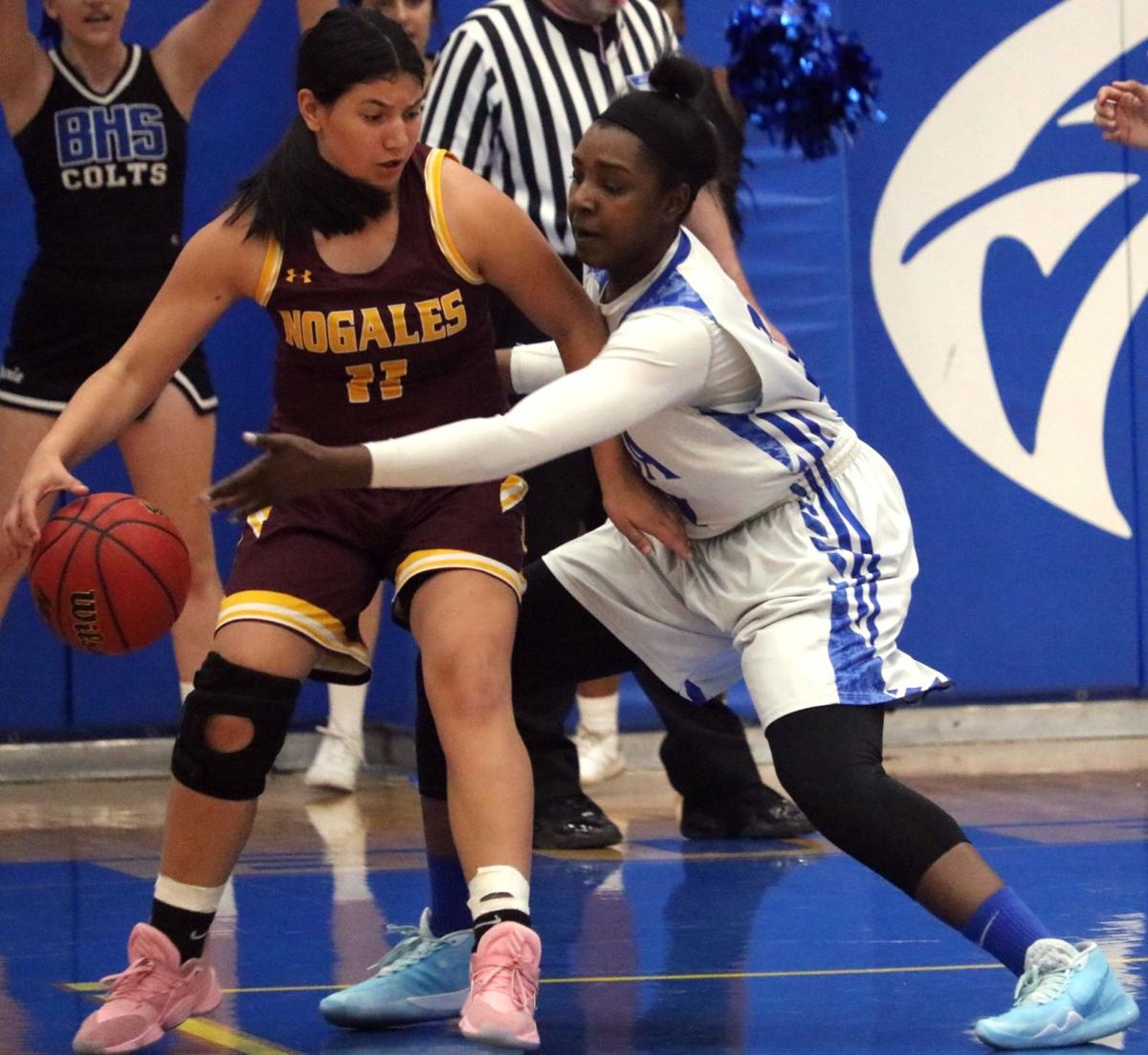 Coach Cole Colvin uses a brief pause in action to draw up a play for his team in the first half against Nogales on Friday.

Lydia Griffith battles for the ball in the first half of Buena’s win over Nogales.

SIERRA VISTA — It may have taken more game time than Lydia Griffith wanted, but the senior became Buena High School’s all time leading scorer Friday night in a 51-41 win over Nogales in Sierra Vista.

Griffith entered Friday’s game coming off a 19-point performance against Sunnyside on Wednesday and three points away from the 939 school record for career points. The senior was held without a point in the first quarter but knocked down a 3-pointer with 6:38 to play in the second quarter off an inbound pass to surpass the previous record.

“It was nerves that made it take so long,” Griffith said after the game. “Ever since sophomore year I wanted it. The stats are in the locker room and I saw it and wanted it. I’m very proud (of breaking the record).”

She had eight points in the win and sits at 945 career points with three regular season games and the postseason left in her high school career.

“The fact that Lydia was the one to break the record is so ironic as she is the model team player and would be perfectly fine with her teammates scoring the ball and us winning.” head coach Cole Colvin wrote in a statement to the Herald/Review.

“Lydia is the perfect young lady. She is the best leader I have ever seen, she holds herself and her team to high standards, but most importantly she gives everything she has every night.”

“Lydia is truly going be missed after this year is over, but the bond her and I have created over these years makes this record even more special.”

Griffith said the “coolest” part of breaking the points total is now her and Jaslyn Booker both are in the Buena history book.

“It’s very special cause Booker has hers and now I have mine,” she said. “We’ve grown up together from eighth grade to now ... so it’s special.”

Although it took Griffith some time to shake the jitters, the Colts were off to a fast start. They took to a four point lead but Nogales capitalized on a brief Buena offensive lull and tied the game 4-4 three minutes into the game. Booker broke the tie with a put back and the Colts defense forced steals for quick buckets in transition to have a 12-4 lead with 2:48 remaining in the quarter.

A late 3-pointer by Nogales cut Buena’s lead back to four, 12-8, at the end of the first eight minutes.

The Apaches pulled within one point in less than a minute and a half. Griffith’s record breaking 3-pointer was the Colts’ first points of the second quarter. Nogales took their first lead less than a minute later. A three-point play by Booker kept Buena within one, 19-18, with 3:14 left in the half.

Bianca Bellinger scored the Colts next seven points to put some space between her team and the Apaches. Bellinger was Buena’s second leading scorer with nine points. The Colts held a 27-21 advantage at halftime.

Alani Encinas scored Buena’s first five points of the second half, which boosted Buena’s lead to 34-26 with 3:31 to play in the third quarter. Despite a surge in point production, Nogales still trailed by seven, 37-30, heading into the final eight minutes.

Encinas sparked the Colts in fourth quarter, scoring nine of her team-leading 16 points in the final frame.

Friday’s win puts the No. 6 Colts at 13-2 overall and a perfect 7-0 in region play. They travel to Marana on Tuesday and play their final home game of the regular season on Friday when they host Ironwood Ridge at 7 p.m.