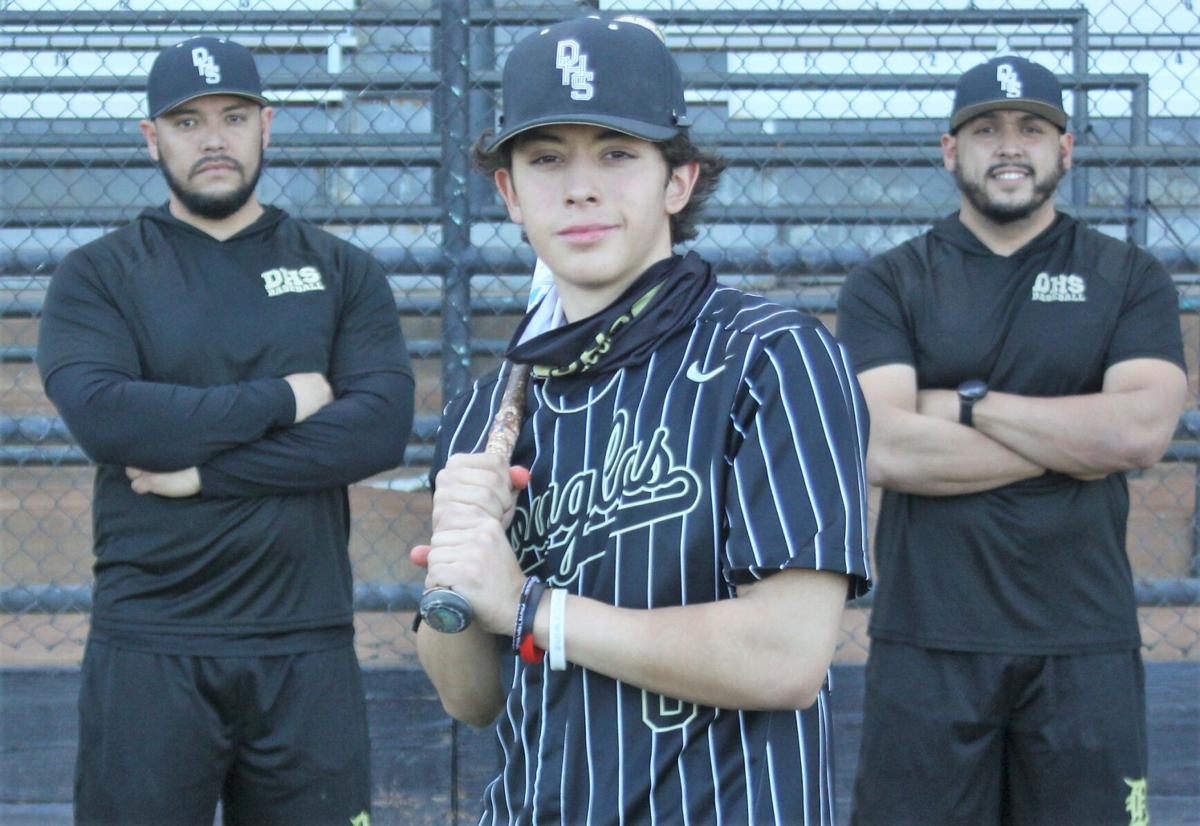 The focus for Diego Ochoa Sr., left, and Douglas interim baseball coach Fabian Ochoa, right, is to get senior Diego Alan Ochoa ready to play baseball at the next level. Ochoa and the Bulldogs host Rio Rico Friday in Douglas in a key 4A region showdown. 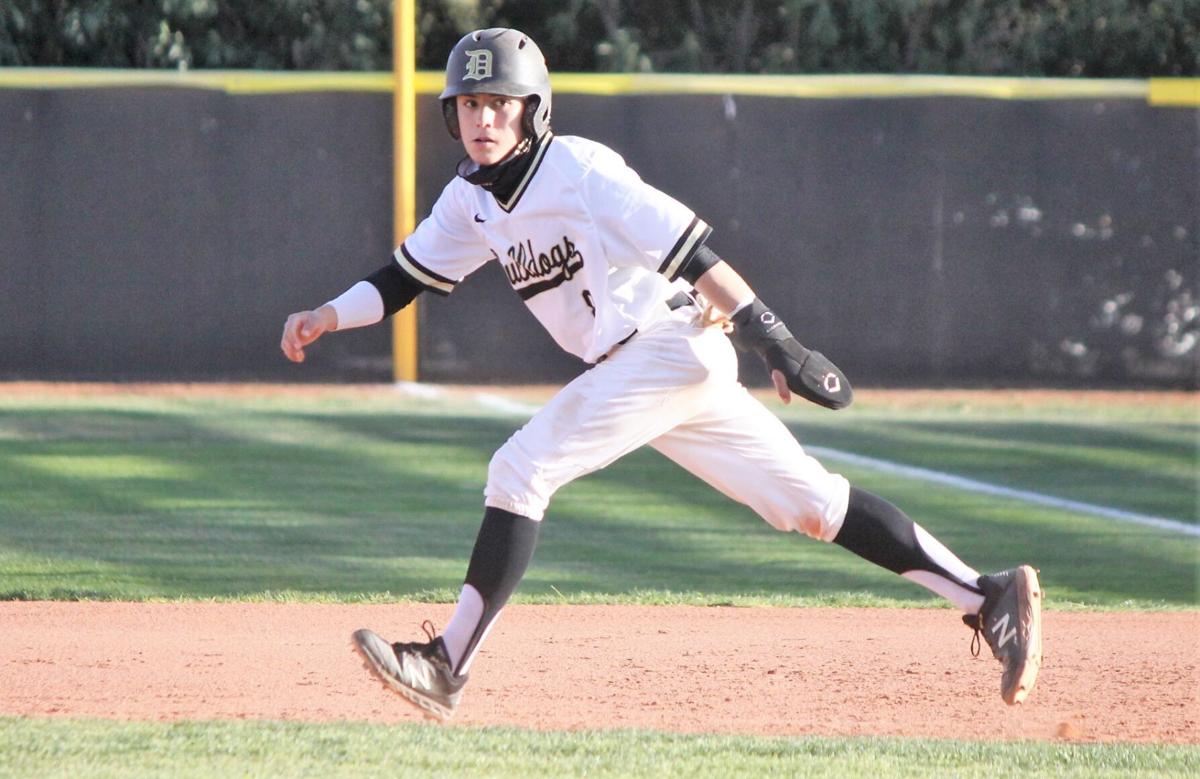 Diego Alan Ochoa is off and running as he steals a base in a recent game. 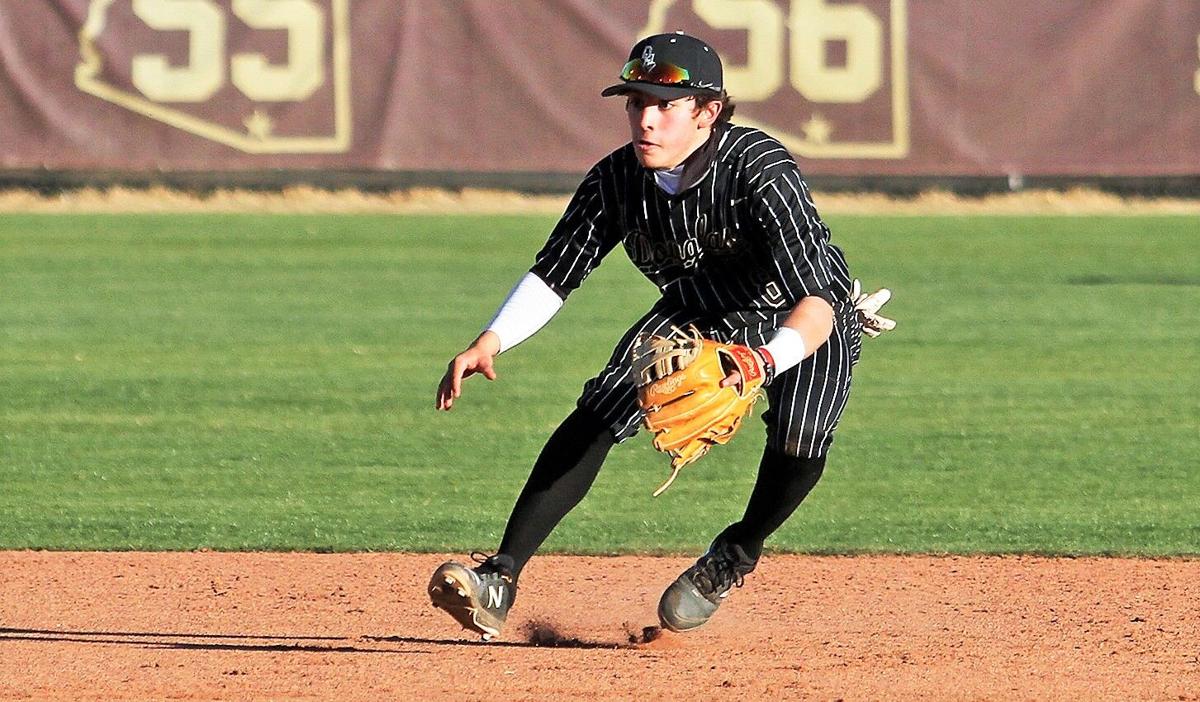 Douglas shortstop Diego Alan Ochoa prepares to make a play in a game with Nogales.

The focus for Diego Ochoa Sr., left, and Douglas interim baseball coach Fabian Ochoa, right, is to get senior Diego Alan Ochoa ready to play baseball at the next level. Ochoa and the Bulldogs host Rio Rico Friday in Douglas in a key 4A region showdown.

Diego Alan Ochoa is off and running as he steals a base in a recent game.

Douglas shortstop Diego Alan Ochoa prepares to make a play in a game with Nogales.

DOUGLAS — Diego Alan Ochoa has a passion for baseball he says is hard to describe. It motivates him to give it everything he’s got whether it be at practice or a game.

Ochoa, 18, is the son of Diego Sr. and Sylvia Ochoa of Douglas. He has been a member of the varsity baseball team all four high school years and in 2019 as a sophomore was named the Gila Region’s Defensive Player of the year. Ochoa leads the Bulldogs with a .579 batting average and is fifth in the entire 4A. He also leads the team as well as the 4A conference in on-base percentage.

Ochoa’s grandfather, Jesus, also known as “Cachuli,” was a standout baseball player for the Bulldogs when he was in high school. His two uncles, Ivan and Fabian, who is now his coach, both played ball at DHS; and his dad Diego Sr., who assists Fabian in coaching the Bulldogs, played ball not only at DHS but also at Cochise College.

Ochoa has grown up playing baseball in the local youth summer leagues beginning, he says, when he was 3 years old.

“We’re either playing it, talking it or watching it,” Diego Sr. added.

Father and son say if you were to visit their home, especially during the summer, chances are very strong there would be a baseball game on one of the televisions.

“There is nothing in particular about the game I like, it’s just the game itself,” Ochoa said.

After high school he is hoping to get an opportunity to play ball somewhere and while he has a few offers pending he is hoping something a little closer to home may come soon.

Ochoa states that playing for his dad and uncle is something he will remember forever, especially knowing this is his last year as a Bulldog.

“It’s really neat having them there because between the three of us we talk so much baseball, even at home, we pretty much have the same mindset,” he said.

While the Bulldogs are struggling somewhat and are in the midst of a two-game losing streak, Ochoa has the belief his team can salvage its season and make an appearance in the upcoming 4A state playoffs.

“Not having an off season this year made it tough,” he said. “I’m confident we’ll be OK. We just need to cut down on our mistakes and make the plays we should make. I hate losing.”

Ochoa says when he was informed Gilbert “Buck” Rojas was not coming back to coach this year he was concerned. Shortly thereafter he found out his uncle Fabian would be the interim coach and suddenly everything was right again.

“I really appreciate all that coach Rojas did for me,” he said. “But having my dad and uncle Fabian here has been great.”

Diego Sr. says it seems like “just yesterday” Diego Alan was born and now he’s graduating high school and hopefully going on to play baseball at the next level.

Fabian said he knows Ochoa’s character and what the games means to him. It’s because of that Ochoa is one of the team captains.

“It seems like the Ochoas are known as a baseball family and I plan on keeping it that way,” he said.

“This is a very special time for us. I want to thank the DHS administration for allowing me to coach my nephew and this team his final year and have my brother here helping me. My focus at the moment is to try and get this team to state. I’d love nothing more than to be able to send all these seniors on to the next level.”