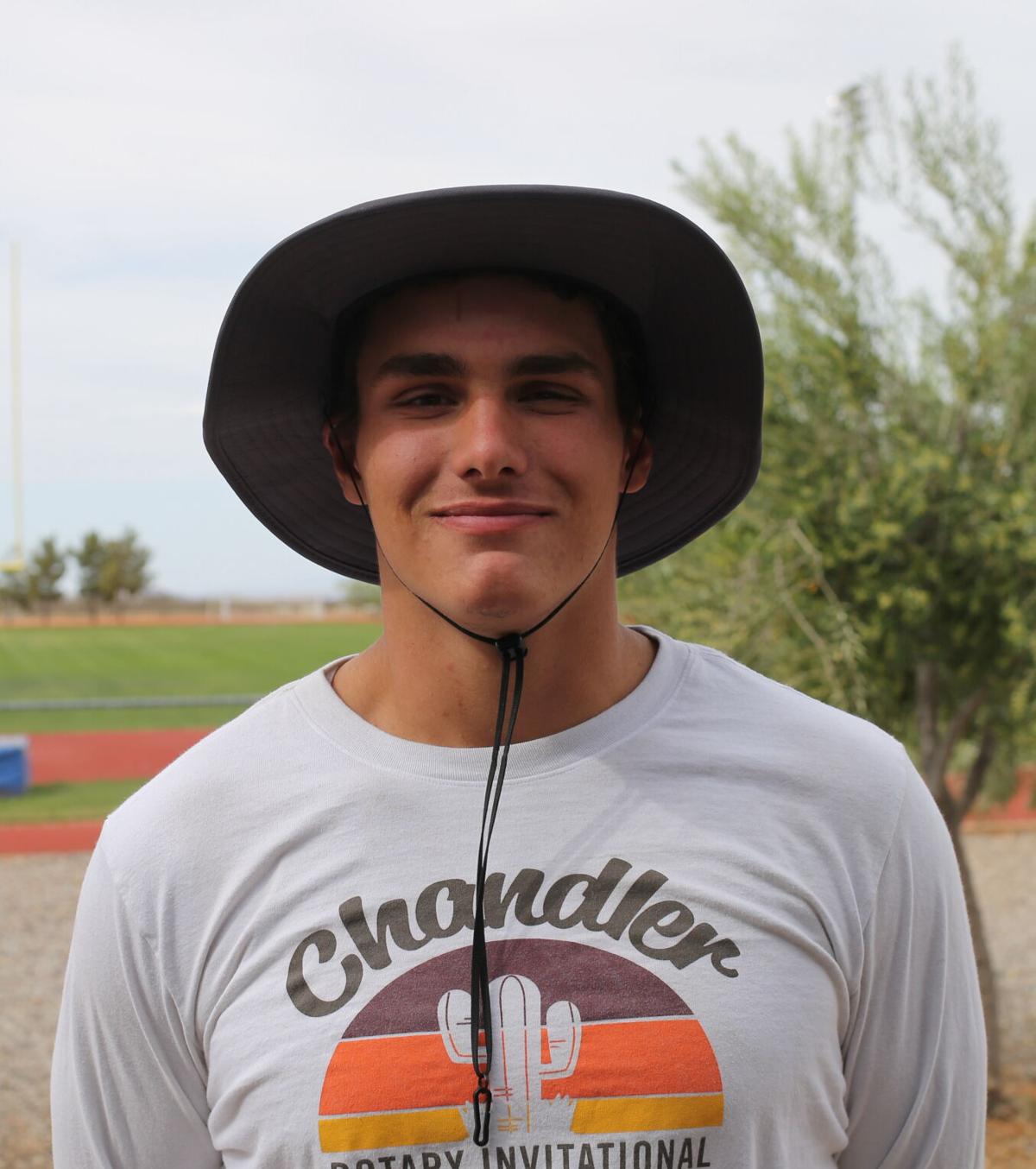 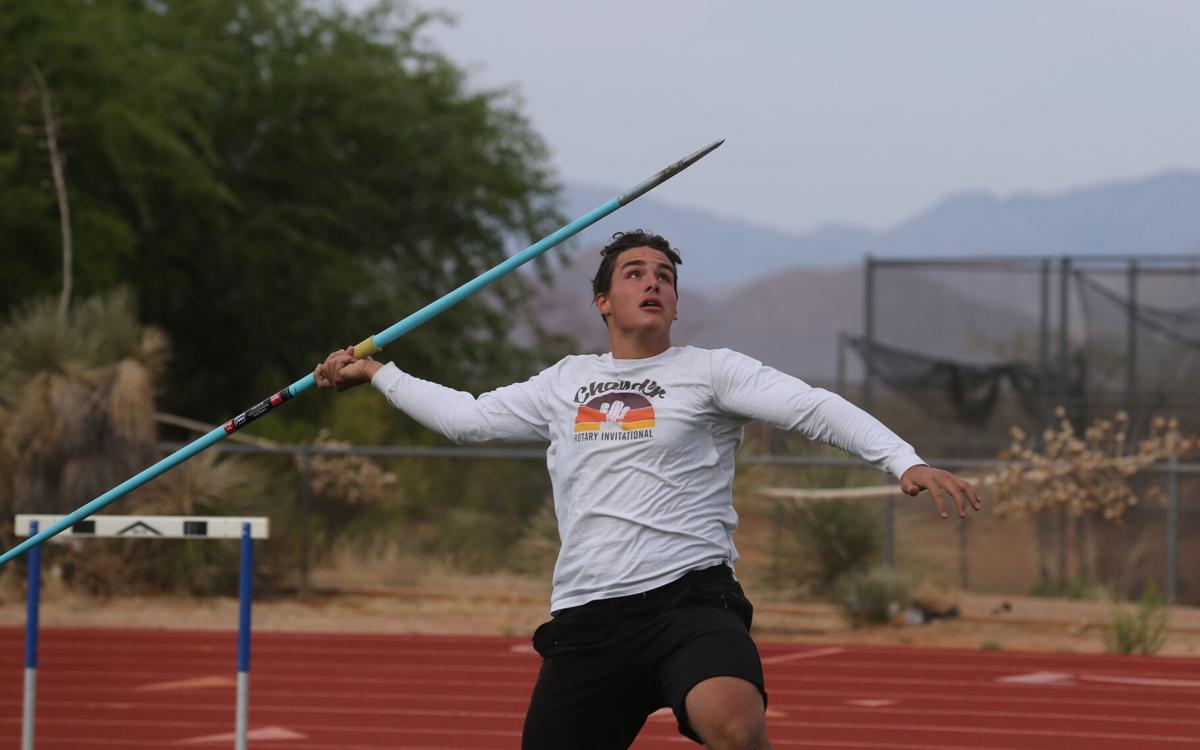 Ask his coaches, his teammates. A barrel of laughs, so much fun to be around.

Ask his opponents in javelin and shot put. Uh, not so much. Deadly serious, with a total focus on one goal: Being the best he can be.

Stemler has come a long way in a short time. He received his introduction to the throwing events at Buena High school as a freshman, sat out the COVID-19 season cancellation as a sophomore and really didn’t start to train and learn until this season as a junior.

A lot of that productivity coincided with the arrival of Kassie Smith on the Buena campus.

Head coach Roger Bristow credits Smith for her work with Stemler and other Colts throwers, including discus man Dominic Avant.

“They’ve been working hard, coach Kassie has been doing a good job with them and they’re excited,” Bristow said last month.

Stemler in particular. The 6-foot-2, 245-pounder just needed some direction, and Smith easily provided that.

A standout performer at Brigham Young University, Smith started throwing when she was 12 years old. She was an assistant coach at Utah Valley University in the throws for a season before moving to Sierra Vista and joining the Buena track and field coaching staff.

“We’ve drastically changed the program (throws) to quite a competitive team,” Smith says. “The men’s team is doing fantastic. We’ve had drastic PRs (personal records) from both the main throwers, Dominic Avant and William Stemler.

Indeed. Stemler is No. 2 among Arizona Interscholastic Association Divison II shot putters, sending the shot 50-01 for second place in the Nighthawk Invitational at Oro Valley Ironwood Ridge High last weekend. Marana Mountain View’s Sam Halaufia, No. 1 in the shot put rankings, nipped him for first place in the meet by a quarter inch.

However, it’s the javelin Stemler dotes upon. He shadowed former Colts thrower Jesse Avina, now at Phoenix Paradise Valley Community College. Stemler was eager to get into the event. Thus, he’s taken Smith’s tutelage to heart.

“She knows what she’s doing. She’s there for you, she wants you to throw far, but if you’re not feeling it that day, she’ll just, ‘stop, we’ll pick it up tomorrow.’ “

The main items Smith and Stemler work on for the javelin are good extension, establishing a good plant leg and “letting it go.”

So let’s join Stemler as he prepares to throw:

“I’m thinking big crossovers, good plant and a big arm, and you let it fly,” he says. “Watch you don’t cross that line, and step out and see what the measuring is.

The work with Smith has Stemler at No. 4 in the javelin rankings with a best of 155-1. He won the Nighthawk competition with a heave of 154-01.

Smith says Stemler’s best was around 90 feet before this season. Talk about progress …

“It’s been super exciting and super rewarding and they are a great bunch of kids,” Smith says.

“William is the hardest worker in the room. He has a lot of qualities that remind me of myself, how I view track. He’s just a natural talent, a gifted athlete and just a super good person on the field and off the field.”

Stemler will study film and text Smith with questions regarding how to improve. They will discuss the info at practice.

“He’s always striving to be the best that he can be as an athlete,” Smith says. “He’s just super contagious to be around. He is super easy to coach because he bought into my philosophy and the way I coach so easily. We are able to communicate and understand each other in a different way. We do butt head occasionally when it comes to different things.

“It was technique, he had no technique. He was just a brute strength. It’s quite an adventure to see him throw and go, ‘oh my goodness.’

“It’s wanting to be around someone that I truly am grateful to coach. It makes it worth my while.”

“He is a major goofball,” Smith adds.

“There are a lot,” Smith says. “One of my favorite ones is the Swedish I have taught and him butchering it completely and making it his own thing with grunting and screaming.”

Stemler is successful in the classroom and in another sport: He played inside linebacker and tight end for the Colts’ football team and has received contact from Drake, Montana and Boston University, who show interest in him as a linebacker.

“Hopefully i can throw javelin in college and play football, that’s perfect for me,” Stemler says. “Going to college for any sport, anything is fine for me.

He will concentrate on his javelin quest, however. With his rapid improvement — this is considered his first year in the event — Smith believes he can hit 170 feet this season, and next year aim for 200.

“To be honest, if we’re talking long term, I can definitely see this kid going places I never went,” Smith says. “I definitely could see him being on an Olympics team for the USA. He has that mentality. He has that drive and dedication to work hard. But definitely college, an All-American, I think.”

That desire to be the best he can be, fueled early by his father who was a college football player, will spill over into the summer.

“I’m going to try to throw at least four time a week this summer,” Stemler says. “I don’t know if I’ll do any meets, but I’m definitely going to throw during the summer to keep that repetitive motion and keep improving.”