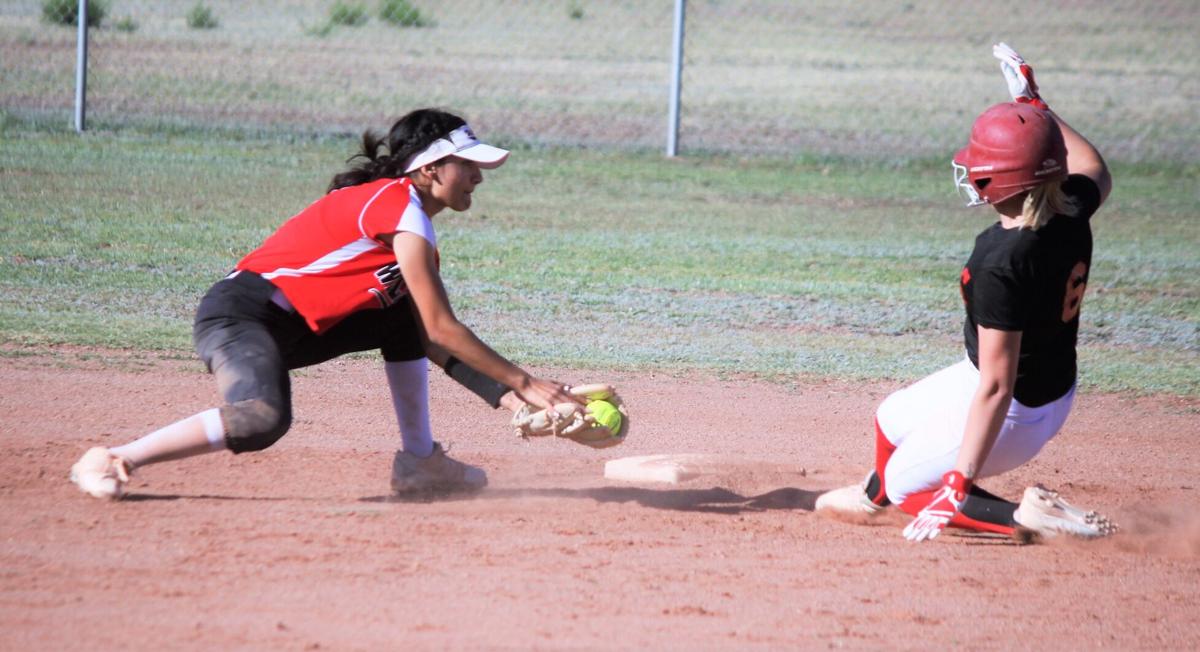 Willcox shortstop Jazlyn Felix gets set to make the tag on Bisbee's Mariah Long as she slides into second base in a recent 2A South softball game. 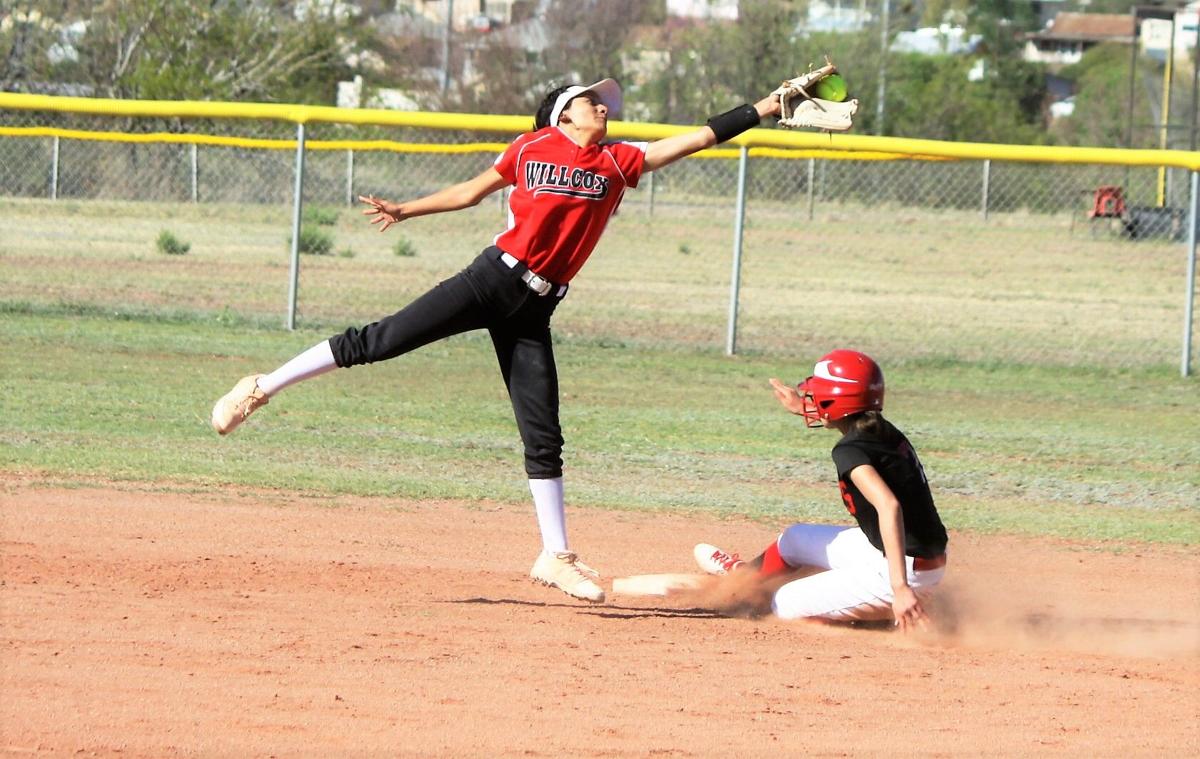 Willcox shortstop Jazlyn Felix does her best to keep a throw from going into the outfield while Valerie Wright of Bisbee slides safely into second base.

Willcox shortstop Jazlyn Felix gets set to make the tag on Bisbee's Mariah Long as she slides into second base in a recent 2A South softball game.

Willcox shortstop Jazlyn Felix does her best to keep a throw from going into the outfield while Valerie Wright of Bisbee slides safely into second base.

WILLCOX — A pleasure to coach, an extremely hard worker, a great person to be around— these are only a few of the many accolades used to describe Willcox High School junior softball shortstop Jazlyn Felix.

This is Felix’ third year of playing shortstop for the Cowgirls. Her interest in softball did not start in high school, however; she started competing in T-ball when she was 5 years old. Her career in volleyball started later when she was in sixth grade.

In addition to the time and energy she puts into her high school sports, Felix also helps as an assistant Little League coach.

“I like coaching Little League,” she said. “I like helping them learn how to achieve goals. Being closer to their age, I can understand where they are, help them perfect their techniques and hopefully act as a role model for them.”

It is her conviction for helping others achieve their goals that is part of her motivation.

“My goals are to have an impact on someone’s life, to inspire them and to be a positive role model,” the Willcox shortstop said.

It is more than her desire to help others that leads the list of her top goals.

“I want to be happy, to be successful and to make my family proud,” Felix added

She sees more in the sports of softball and volleyball than just her ability to compete athletically on the diamond or on the court.

“Sports teaches me about life,” she said. “They keep me busy. When I wake up in the morning I know I have something in addition to school to look forward to. Sports are fun; my teammates are like my family.”

This season she is in the top 10 of many 2A South statistical softball rankings. Her regional stats have her second in stolen bases with 14; third in runs with 35; fourth in batting with a .561 average; fifth in RBIs with 28; fifth in slugging with a .982 percentage; sixth in home runs with three; and eighth in on-base percentage with .627.

It’s not the honors and awards, however, that motivate Felix. What she enjoys most about playing sports is that her team is her athletic family, many of whom she has played with since their T-ball days. It’s the happy feeling she gets from achieving team goals together and from having an impact on each other’s lives.

Felix has many people who have impacted her life in a positive way, starting with her parents, Maria and Juan Felix, who are Willcox High School alumni. She has gone through the Willcox school system since kindergarten. She and her younger brother, Lorenzo, will keep the family tradition alive as future Willcox graduates.

“My parents are my biggest supporters,” she said. “They are always positive and encouraging.”

“Jazlyn is an amazing daughter, student, and athlete,” Maria said. “She is very dedicated to her school and sports. She has so much energy — she never stops. I don’t know where she finds the time to do all that she does. We are so proud of her.”

“Jazyln is a dedicated student and athlete,” her dad said. “She got hooked on softball when she was little. She has always been competitive. I don’t know how she keeps up with everything she does but she is always on top of her schoolwork and sports. This makes us happy — we are so proud of her.”

In addition to having the support of her parents, Jazyln looks to the Willcox coaching staff that oversees her teams as positive role models.

“Our coaches are always there for us,” Jazlyn said. “One of my softball coaches, Jack Kortsen, believed in everyone equally — he never picked favorites. He always pushed us to do our best, taught us life lessons, and motivated us no matter what the situation was. I only had him as a coach for one year but he still inspired me a lot. I miss him dearly.”

Jazlyn’s high school coaches think as highly of her as she does of them.

“Jazlyn is a hard worker with a great attitude,” Willcox volleyball coach Todd DeBaun said. “Her attitude and work ethic set her apart from a lot of kids. She is a positive force on our team; she is very unassuming. She is truly what you want in a student athlete — good grades, good attitude and a good work ethic. She represents our school and community well. I’m glad that she’s on my team.”

“She is an absolute pleasure to coach,” Willcox coach Trevor Ward said. “She is loyal, dedicated, and one of the hardest workers on our team — and she always has a smile on her face. She’s extremely coachable and a good teammate. She is always willing and wanting to learn. If she makes a mistake, she is the first to admit it and learn from it. She is just a great person to be around.”

With all her time wrapped around school and athletics, it is surprising Felix has any time left for additional extracurricular activities — but she does. She is a member of the National Honor Society, the Future Farmers of America and Medical Professions. Additionally, she competes in her two favorite sports — softball and volleyball — in club competitions during her off seasons.

Looking to her future after she graduates from Willcox in May 2022, Felix plans to attend the University of Arizona and study radiology to become an ultrasound technician. As for her future in sports, if given the chance she would definitely be interested in playing collegiate softball.