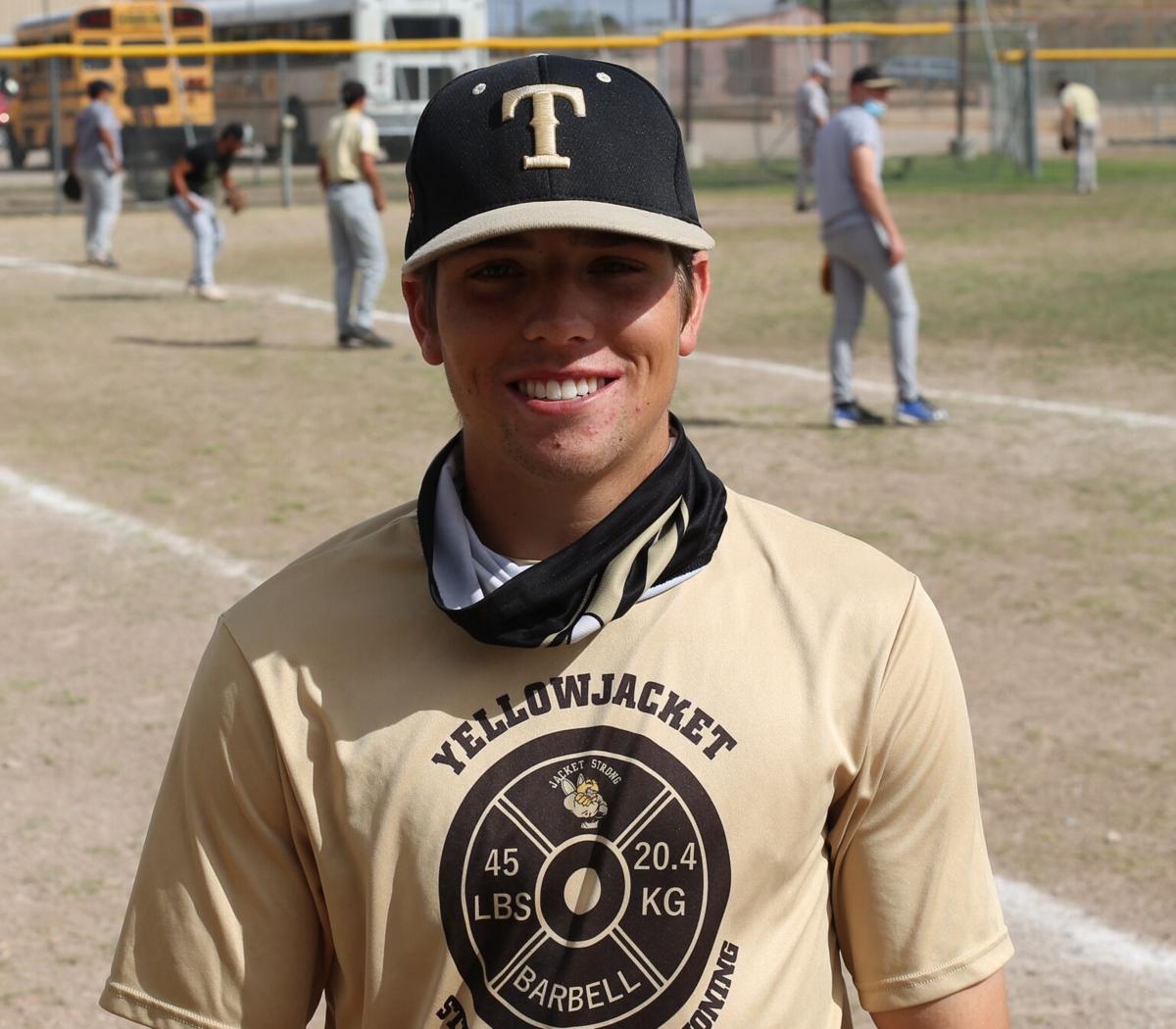 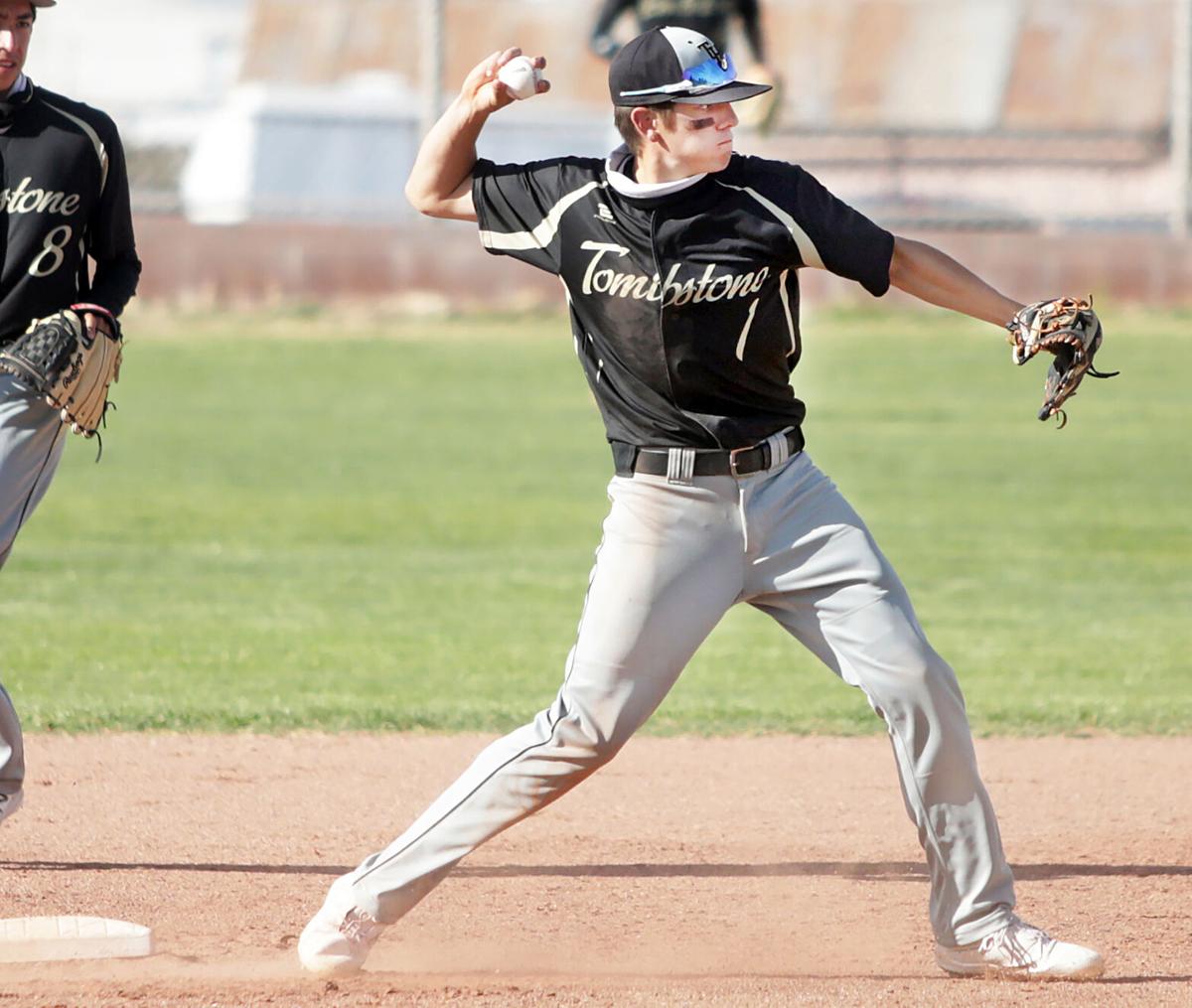 Tombstone senior Zeke Esparza looks to first for the out after grabbing a grounder.

Tombstone senior Zeke Esparza looks to first for the out after grabbing a grounder.

TOMBSTONE — Baseball and soccer are the two sports Tombstone High School senior Zeke Esparza has competed in the longest — actually, for as long as he can remember. It is baseball, however, that has always been his favorite.

“There is no question about Zeke’s dedication to baseball,” Tombstone coach Jamie Milligan said about his varsity team’s shortstop and captain. “He leads by example – working hard on and off the field. He’s the guy you want on your team. He’s a good all-around person from an awesome family. I can’t say enough good stuff about Zeke. He’s just an amazing kid.”

His junior year Esparza decided to go out for Yellow Jackets football. It was a positive decision for both himself and the team as he soon became the kicker, wide receiver and defensive back.

“Zeke started playing football his junior year, competing as a defensive back and wide receiver but primarily as our kicker,” Tombstone football coach Jerry Rhoades said. “Zeke is an outstanding athlete. He picks things up quickly. He is a dependable, trustworthy and responsible athlete. He’s a really good athlete overall but he is an outstanding kicker and baseball player. He’s just a top-notch kid.”

Competing on the Jackets’ varsity football team for two years, Zeke earned 2A San Pedro Region awards as a first-team placekicker his junior and senior years. He also earned 2A East recognition in baseball: second team all-region his freshman year, first team all-region his sophomore year. His junior baseball season was cut short due to COVID-19 so no regional or state honors were given.

The time, dedication and hard work Esparza has put into his high school baseball career did not go unnoticed. Zeke recently accepted an athletic scholarship to play baseball at Ottawa University in Surprise.

“One of my goals has always been to play college baseball,” he said. “I’ve talked to a lot of people who have played college baseball and they have shared many of their positive experiences with me. I’m excited to have this opportunity.”

Following his college baseball years, Zeke’s goal is to see how far he can go in professional baseball.

He knows that there is much more to athletics than just being a member of the team.

Yellow Jackets baseball definitely is a family event for the Esparzas. Zeke’s younger brother, Joel, is a catcher for the team, his father Joe is an assistant coach and his mother Lori is her family’s No. 1 fan. The Esparzas are unquestionably a baseball family.

“My dad has been our assistant coach ever since I started playing high school baseball my freshman year,” Zeke said. “I see everything he does for our family and how he’s raised my brother and me – I want to be just like him. My mom is definitely our support system. She does everything for my brother and me to help us be successful. She has given us the best possible life.”

The respect Zeke has for his parents is a trait shared by the entire family. Their admiration for each other is evident.

“We are so proud of Zeke,” Lori Esparz said. “He works hard to do well in school and in sports. I’m glad that Ottawa University is close to home so we can still watch him play baseball.”

Joe Esparza has been Zeke’s coach since he was in Tee-Ball. Now he will see him go off to compete at the university level.

“Zeke has worked really hard to get to where he is,” Joe said. “He has developed into an all-around good baseball player with a solid work ethic. It’s one thing to want something but it’s another thing to work for it. Zeke has put in the time and hard work that it takes and is achieving his goals.”

Esparza is playing his final season of baseball as the Yellow Jackets’ shortstop. Of his many athletic memories, he is quick to remember when he and his baseball teammates achieved one of their team goals, making the 2A state baseball playoffs his sophomore year.

“We made it to state but lost in the first round to the No. 1 team,” Zeke said. “But it was the journey we took to get there and what we accomplished together for our team and our school that I’ll always remember.”

Zeke’s journey after high school baseball and graduation will see him still on the baseball diamond, still playing his favorite sport at the collegiate level and still working hard to accomplish his goals.