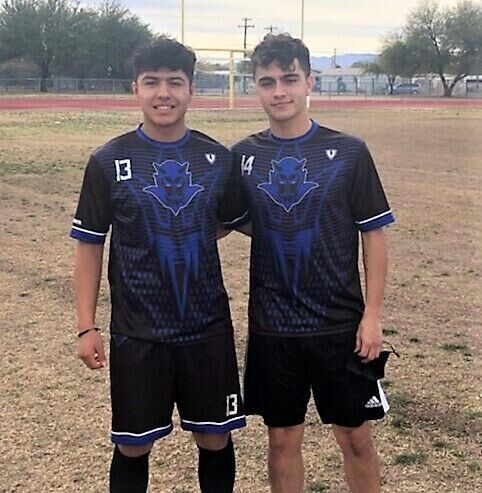 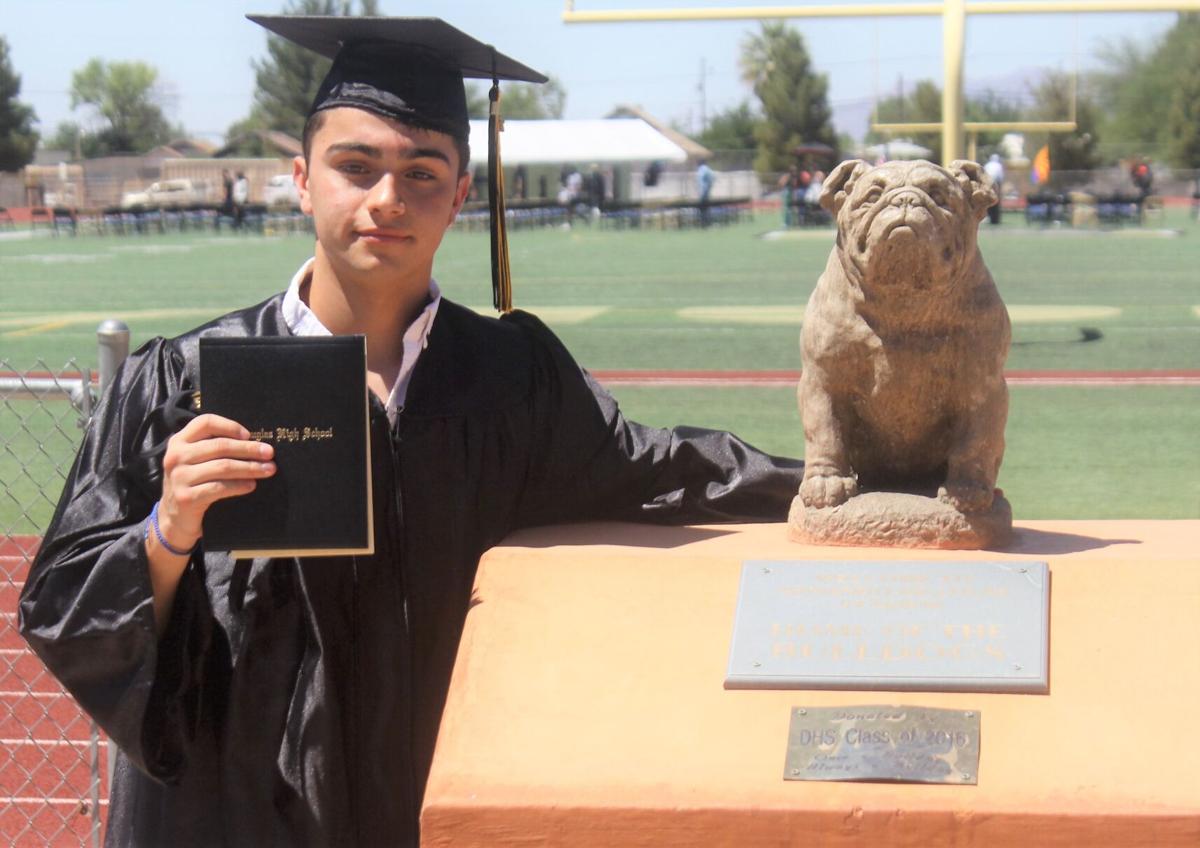 Joaquin Escalante returned to DHS after playing soccer at Sunnyside and was able to walk off the field one last time as a proud Douglas Bulldog. 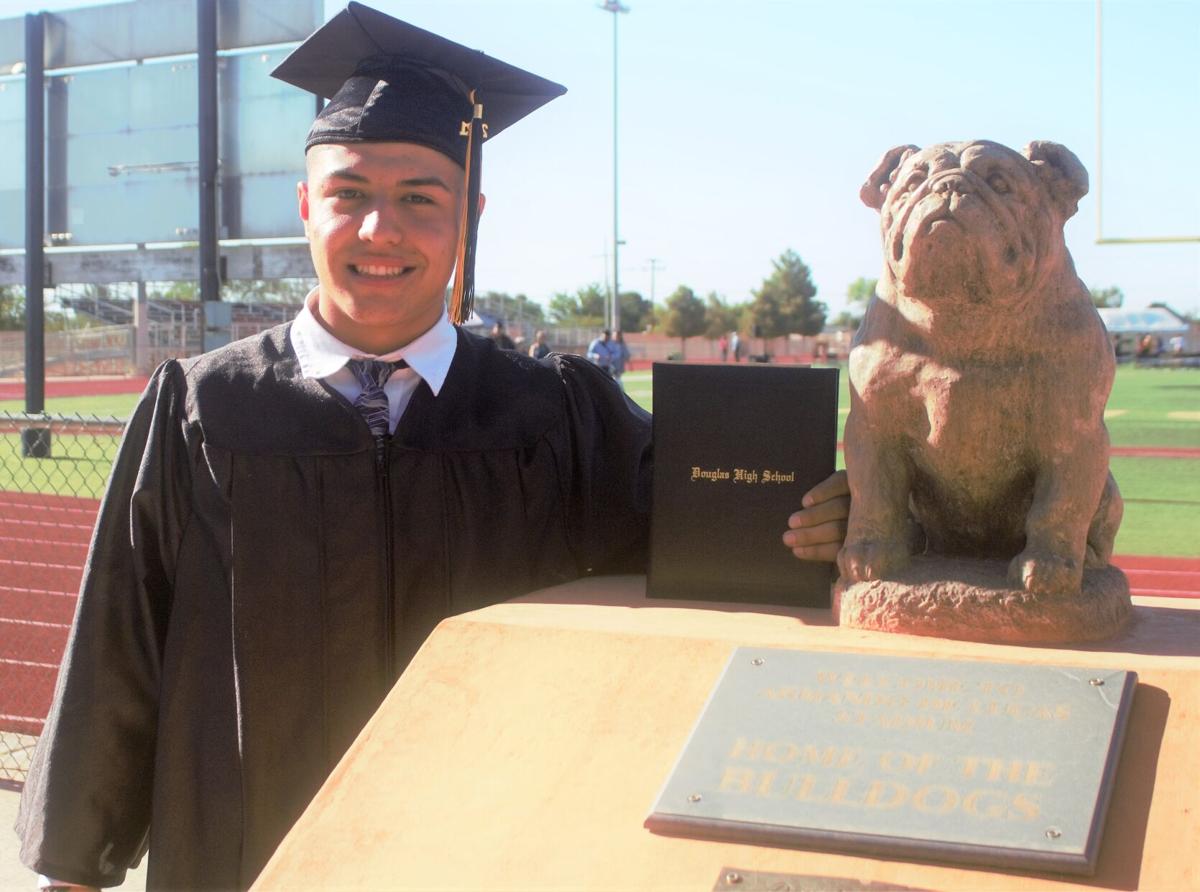 Miguel Sosa displays his Douglas High School diploma after walking off the field one last time May 28 as a proud Douglas Bulldog.

Joaquin Escalante returned to DHS after playing soccer at Sunnyside and was able to walk off the field one last time as a proud Douglas Bulldog.

Miguel Sosa displays his Douglas High School diploma after walking off the field one last time May 28 as a proud Douglas Bulldog.

DOUGLAS — Two Douglas High School soccer players are fulfilling a childhood dream of playing at the next level.

Joaquin Escalante and Miguel Sosa have both accepted scholarship offers for the upcoming collegiate soccer season.

Escalante is heading to Bethel University, a private evangelical Christian Division III university in Arden Hills, Minnesota. Sosa will be playing at Gateway Community College in Phoenix, where he will study to become a medical stenographer.

When Douglas High School announced it was not having a soccer season this year due to COVID-19, Escalante and Sosa were part of a small group of players who left Douglas temporarily to play soccer at Sunnyside High School in Tucson, hoping to improve their soccer skills while also improving their recruiting status. After the season was over they re-enrolled at DHS and graduated May 28 with their classmates.

“Both of these boys were excellent to work with,” Sunnyside coach Casey O’Brien said of his two former players. “They had great attitudes and an excellent work ethic. They blended in nicely with the team we had in place for this season and helped elevate us to a championship contender. Their character is what stood out most to me, they both were highly responsible young men. I know they both have bright futures in soccer as well as in life. I wish nothing but the best for both of them. Whichever school ends up with these young men is extremely lucky and they’ll continue to make Douglas proud.”

Escalante and Sosa both played in 17 games for Sunnyside, which went 13-4, 4-1 in region, and advanced to the second round of the 5A state playoffs losing to Glendale Ironwood High School. Sosa scored 14 goals and had eight assists while Escalante scored 11 goals and had six assists.

Sosa said to be able to return to DHS and walk off the field one last time, this time as a graduate, was very special.

“This has and always will be our home,” he said. “Playing soccer at Sunnyside was fun but at the same time a bit strange. It was fun because we were still playing soccer but it was strange because it was not what we were used to.”

Sosa described the experience as a learning experience.

Escalante states he’s excited about the opportunity that lays ahead but at the same time is sad, knowing his days of playing soccer at DHS are done.

“Some of my best memories are on this field,” he said. “Having to leave our hometown to go play at another school was difficult but it was something we had to do because of what was happening here. It was difficult but at the same time fun. They have some really good coaches at Sunnyside and I think that helped prepare me for the next level.”

Escalante said being able to graduate as a Bulldog “is truly an honor,” even in the intense heat Douglas experienced during its four commencement ceremonies.

Victor Ramos, who coached Escalante and Sosa at DHS, said he is happy to see two of his players fulfill a dream he’s known they’ve had for years.

“Both of them are players with great ability and knowledge of soccer, they always worked very hard during practices to be at their best at every game,” Ramos said. “Miguel is naturally a forward that has the ability and mentality to score goals from inside and outside the penalty area. Joaquin (Kiki) is a box-to-box player that dominates all aspects of the game and has the drive to score as many goals as he can. Both of them are great athletes with very good attitude and work ethic but above all, they are excellent young men, responsible, respectful and always willing to learn.”

Escalante and Sosa wanted to thank the community for all the love and support they have shown them even though they left Douglas to play at Sunnyside.