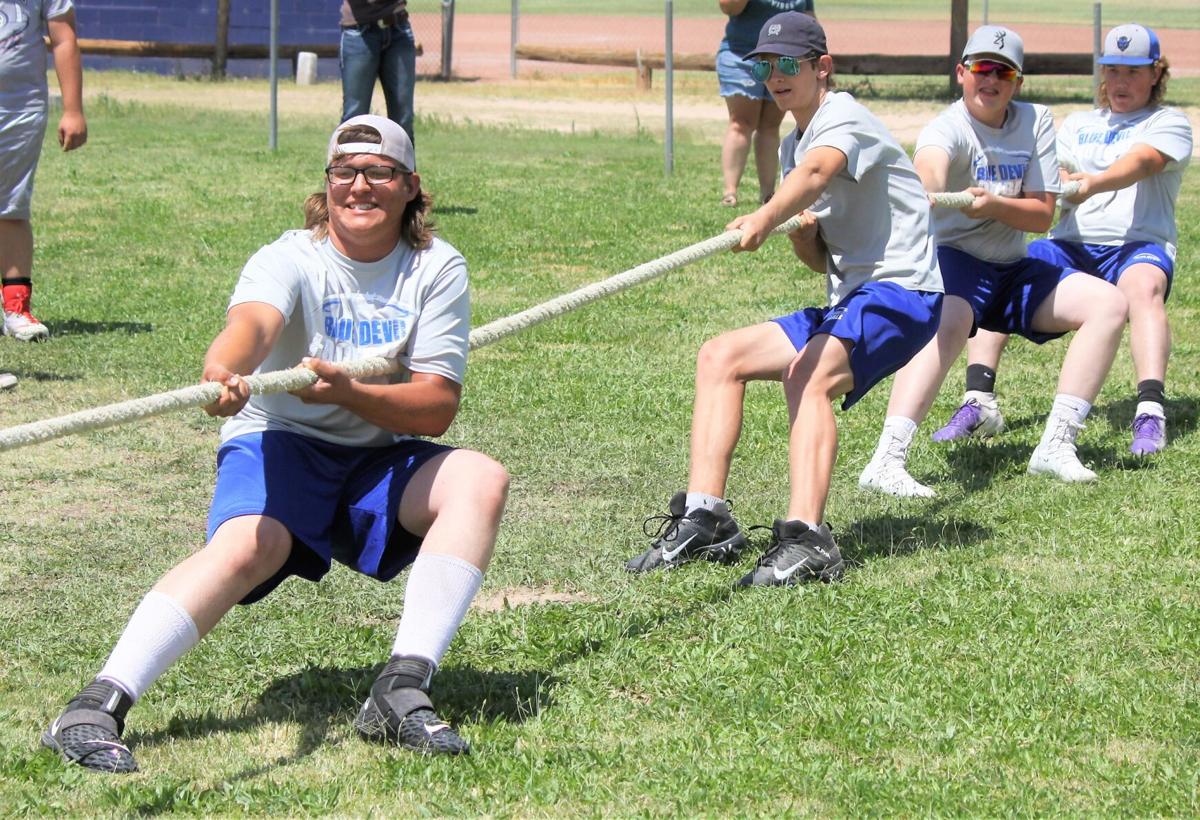 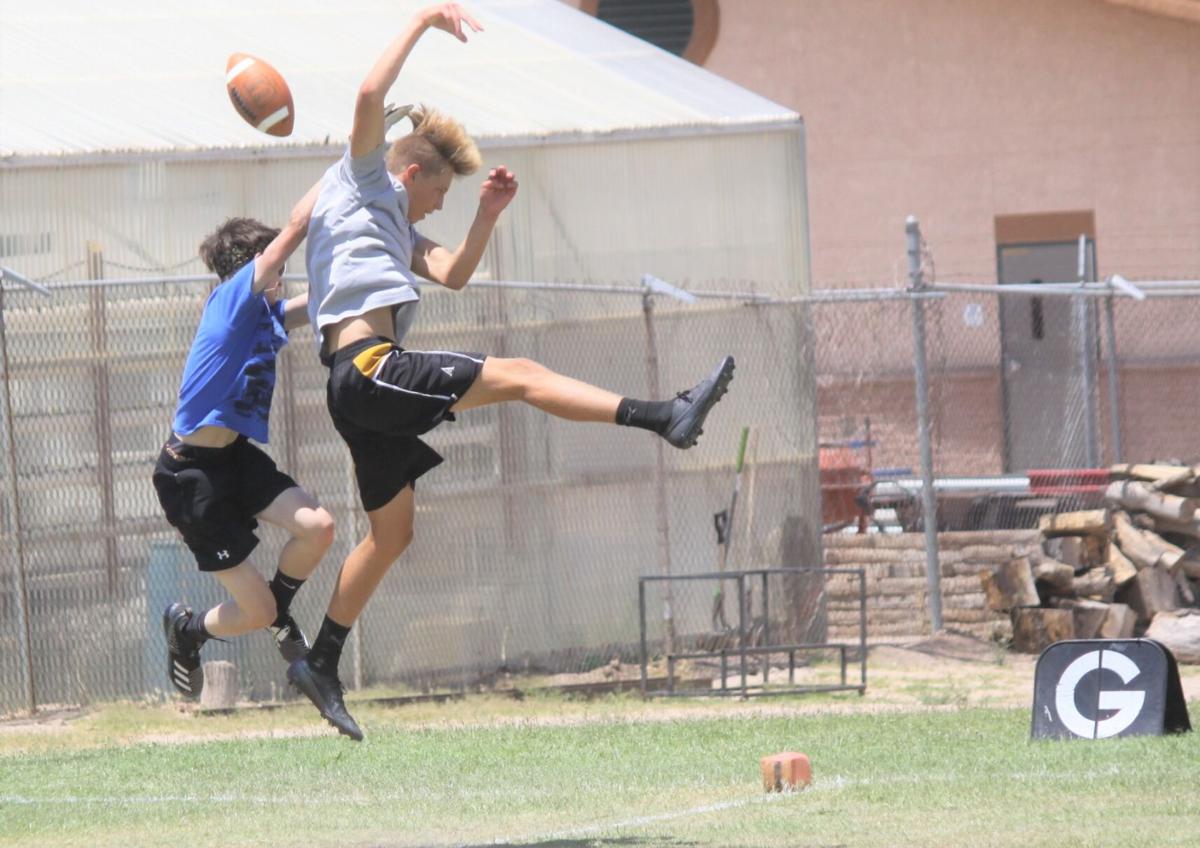 St. David's Koy Richardson makes a game-saving deflection in the passing league matchup Saturday between the Tigers and the Bagdad Sultans. St. David finished the competition 7-0. 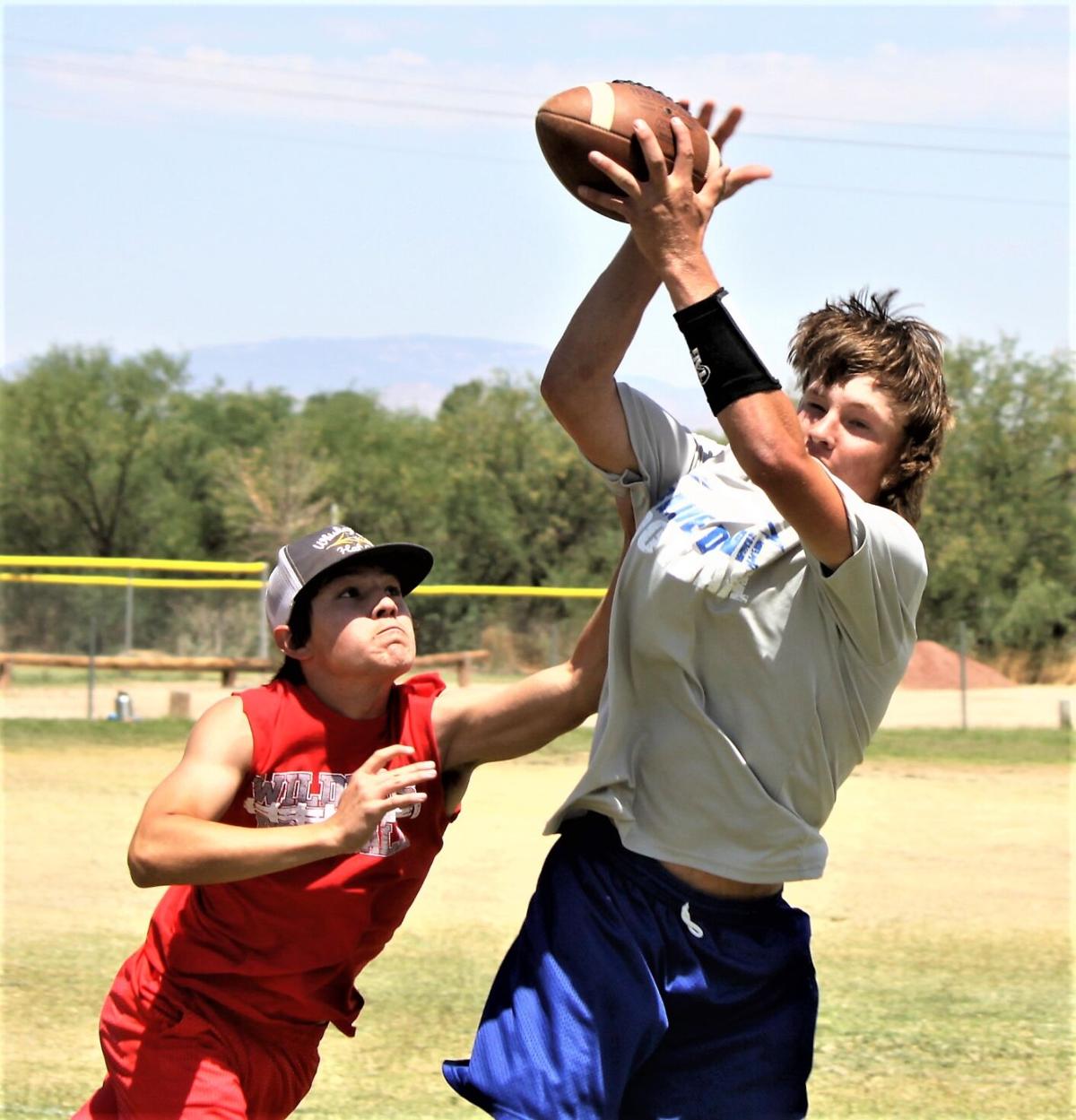 Valley Union's Jace Mitchell fights off a Duncan player as he hauls in a pass for a touchdown in Saturday's passing competition in St. David.

St. David's Koy Richardson makes a game-saving deflection in the passing league matchup Saturday between the Tigers and the Bagdad Sultans. St. David finished the competition 7-0.

Valley Union's Jace Mitchell fights off a Duncan player as he hauls in a pass for a touchdown in Saturday's passing competition in St. David.

ST.DAVID — The Valley Union Blue Devils were in St. David Saturday taking part in a passing competition as well as a lineman’s challenge.

The events were held prior to the 1A All-Star game that took place that evening.

The passing tournament consisted of a 20-minute running clock and points were awarded in a variety of ways, the main one being touchdowns. A team was also awarded three points for an interception.

“Unfortunately, St. David did not have enough lineman available on Saturday to have a team in the lineman challenge,” said Braden Davis, Tigers head coach. “I was very pleased with our performance in the passing tourney. It was difficult throwing the ball deep at times due to the wind and we had to make some adjustments, but I was very happy how our guys battled. We throw and catch the ball very well. We need to work on improving our route running and the timing on our throws, but that will come as we continue to work over the summer.

“I thought our guys worked hard and had fun. It seemed like a fun day for all, and hopefully everyone left tired and full (thanks to Jean Wiseling and the pulled pork BBQ lunch), and without too much of a sunburn. We also want to mention Sterling Nymeyer with Victory Fundraising who donated his time to ramrod the lineman challenge. Sterling did a great job and it seemed like those big guys had a lot of fun.”

Valley Union head coach Brandon Gilbreth said he was happy with how his players competed Saturday, praising the play of his quarterback Kohan Evans, who took some snaps under center last year as a freshman and has been working hard to get ready for the upcoming season.

“He looked really good out there,” Gilbreth said of his quarterback. “Jace Mitchell made some amazing catches today. He’s going to be a big asset for us this year. He’s really fast and caught a lot of our touchdowns.”

Gilbreth also praised the play of his son, Kolby, who took a shot to the face in the first game with St. David, but despite being bloody managed to finish the competition.

“We hung with some of the better teams in the state today,” Gilbreth said. “I think this definitely helped our confidence. Our goal was to come here and compete and these kids did just that. They did not let up.”

Davis and Gilbreth are unsure if there will be any more competitions this summer.

“To be able to come out here and throw the ball the way we did today was kind of fun,” Gilbreth said. “We didn’t throw the ball all that much last year.”

Davis said he is looking at attending a few passing tourneys through the summer, depending on how many players are available.

“We’ll be lifting and practicing through the summer, leading up to our Tiger Camp at the end of July,” he said. “We’ll also have a Youth Tiger Camp the third week of July for the younger kids, which culminates in a flag football game under the lights on Pioneer Day (July 24). Our high school players will help run the camp and will coach the teams for that flag game. As you know, summer workouts and tournaments are voluntary, and since we’re a small school, most of our athletes also play baseball and basketball during the summer. We encourage them to be multiple sport athletes so we have to share the time. As we get into July, however, we’ll need to start dialing it in with football.”