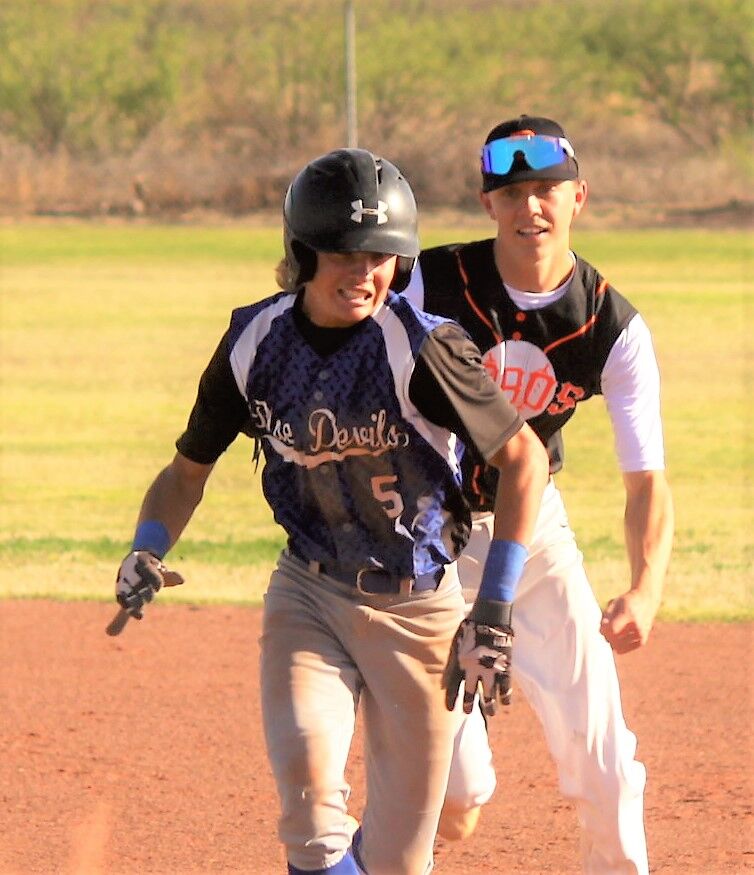 Valley Union's Jace Mitchell is chased back to first base by the Patagonia shortstop in 1A South baseball action Wednesday in Elfrida. 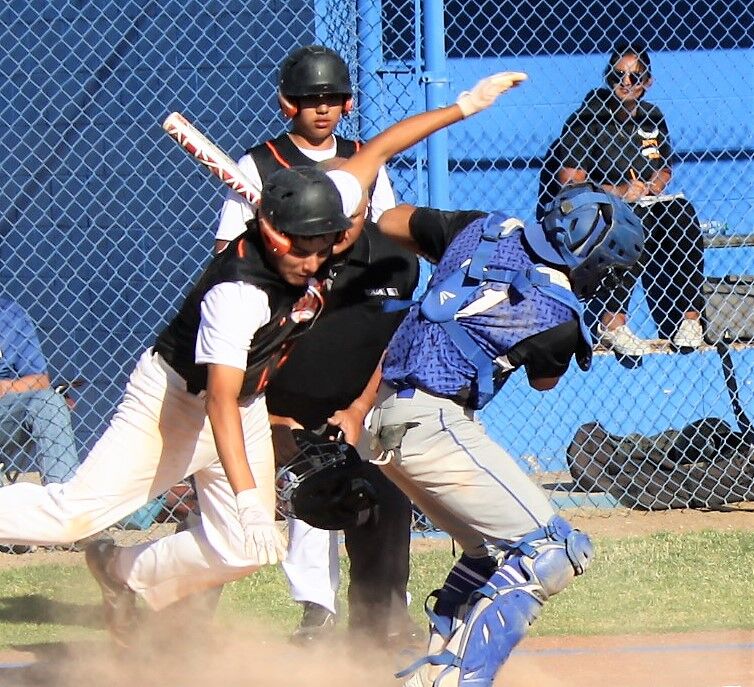 Valley Union catcher Jacob Sonke collides with a Patagonia runner for the out. 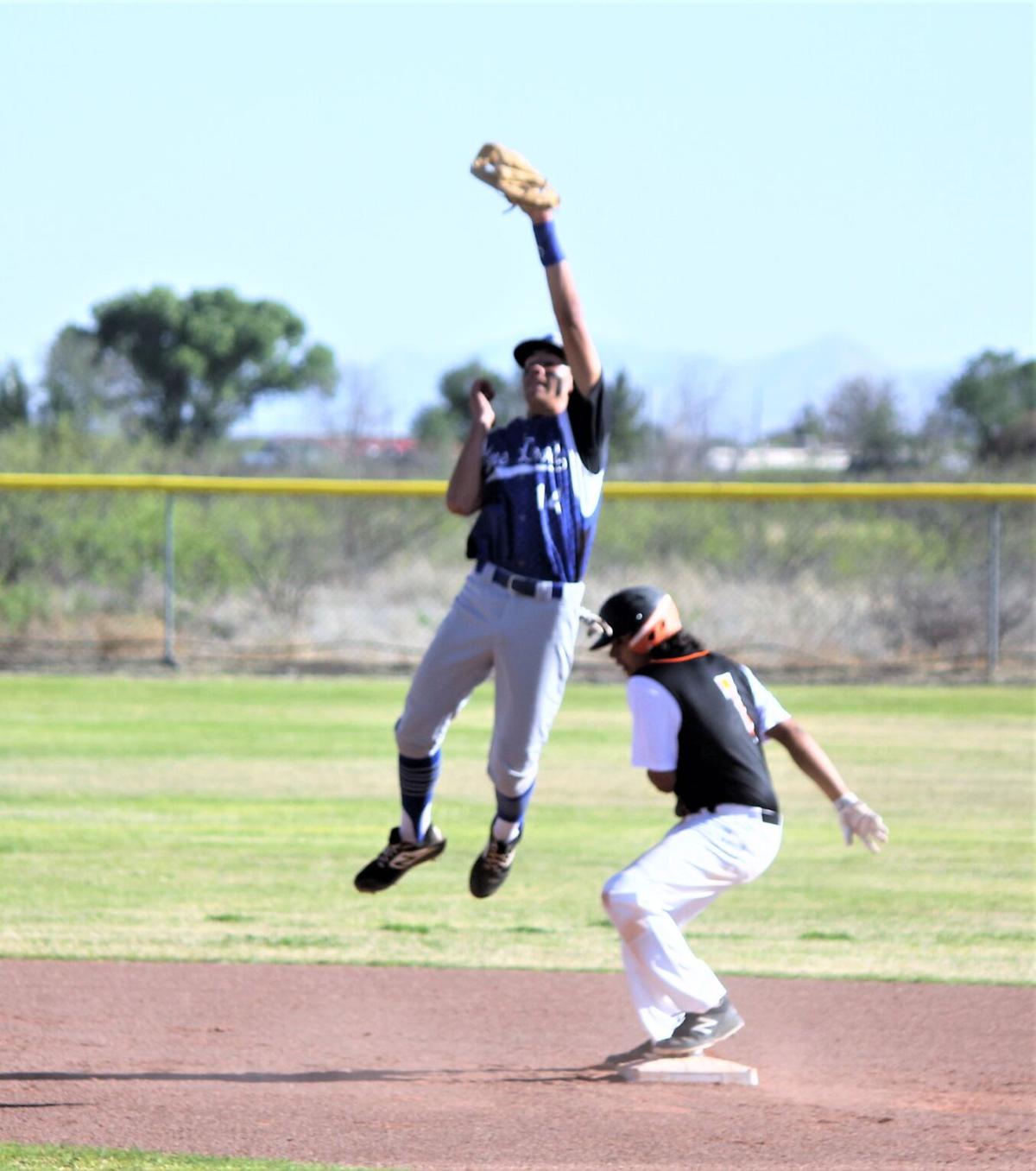 Valley Union shortstop JJ Valenzuela leaps high in the air to keep the ball from going into the outfield Wednesday.

Valley Union's Jace Mitchell is chased back to first base by the Patagonia shortstop in 1A South baseball action Wednesday in Elfrida.

Valley Union catcher Jacob Sonke collides with a Patagonia runner for the out.

Valley Union shortstop JJ Valenzuela leaps high in the air to keep the ball from going into the outfield Wednesday.

ELFRIDA — Despite not qualifying for the 1A state baseball playoffs and playing for nothing more than pride, the Valley Union Blue Devils defeated the Patagonia Lobos, a team that is headed to state, 5-1 Wednesday afternoon which was also Senior Day for the two departing Blue Devils, Levi Lawson and Jacob Sonke.

Wednesday’s win avenged a 10-3 loss the Blue Devils had to the Lobos two days prior at Patagonia.

In the rematch, the Lobos scored their lone run in the top of the first.

Valley Union countered with three runs in the bottom half of the inning for a 3-1 lead. Lawson hit an RBI single that scored Jace Mitchell. Lawson later stole home, giving VU a 2-1 edge, and Sonke later scored on a dropped third strike to Travis Morin.

Valley Union tacked on another run in the third when Sonke stole home, making the score 4-1.

A Blue Devils run in the sixth made the score 5-1.

Mitchell, a junior, who was unable to pitch Monday due to pitching limit restrictions imposed by the AIA, dominated the rematch, giving up one run and five hits while striking out 15, walking one and hitting four in 6 2/3 innings. VU coaches pulled Mitchell from the mound with two outs in the top of the seventh, bringing in Lawson to close out the game in his final appearance as a Blue Devil. Lawson needed six pitches before getting a strike out to end the game.

Valley Union had eight hits. Sonke hit 3-for-4 and scored two runs, JJ Valenzuela, Riesgo and Mitchell each were 1-for-2, and Lawson and Luis Enriquez both were 1-for-3.

After the game Valley Union coach Dusty Vasquez took a moment to reflect on his first season as head coach of the Blue Devils.

“I felt this was a good season because we saw what these boys can do,” he said.

“There were a few games, looking back, I think the boys and coaches know what we could have changed and it would have been a different outcome but the effort started to get there towards the end of the year and that’s what we were looking for.”

Vasquez said the hardest part of coaching during the COVID season was getting the boys up for every game, not knowing until moments before if there was going to be a game or not.

“We had battled through that with football and basketball so many of these kids were used to it,” he said. “It’s still tough to get up for something you don’t know is going to happen or not.”

Vasquez admits Wednesday was bittersweet in that he was happy to end the season with a win but also knowing it was the last time he would coach his two seniors.

Vasquez said Lawson will play in the 1A-3A Senior All-Star game in Tucson June 2. Sonke was invited but declined due to a previous engagement.

The Valley Union softball team has qualified for the 1A state tournament as the 11th seed in the 16-team tournament and will play sixth seed Joseph City Friday at 6 p.m. in the first round at Rose Mofford Stadium.

The Blue Devils are 7-9 overall, 5-6 in conference, 3-1 in region and finished second in the 1A South behind St. David, the regular season champion.